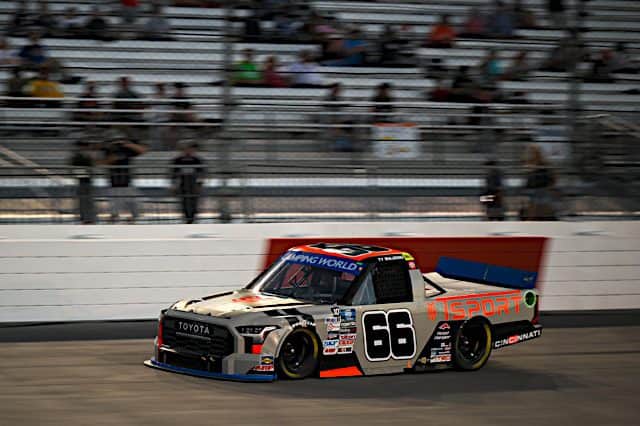 ThorSport Racing is not a bad team. It’s never been a bad team. Many years, it’s been quite good.

And on the surface, 2022 is more of the same in the NASCAR Camping World Truck Series. The longtime Truck team, owned by Duke and Rhonda Thorson with additional support from Mike Curb, has placed each of its four full-time teams into the playoffs. A 10-driver playoff grid means the Ohio-based organization occupies 40% of the postseason hopefuls.

And yet … is ThorSport actually a little behind the eight ball this year?

This might seem silly to say given the accolades above. And I dunno, maybe it is.

But it was a sense I nonetheless could not shake, so I dove into the numbers a bit more.

Here’s last year’s postmortem: in 2021, ThorSport won its fourth Truck championship and first with someone other than Matt Crafton, with Ben Rhodes atop the pedestal at Phoenix Raceway. The team as a whole won three races, two with Rhodes and one via then-part-timer Christian Eckes.

Case closed already, right? Two drivers with a shot for the championship last year vs. four this year. Clearly the team is firing on all cylinders.

Consider, however, the all-important win count. ThorSport pulled off three victories in 2021. This year? Just one.

And it didn’t even come on asphalt. ThorSport’s only 2022 win was with Rhodes at the Bristol Motor Speedway dirt track.

None in the last two races means none of the four playoff competitors — Rhodes, Crafton, Eckes and Ty Majeski — have locked into the Round of 8. And while it’s impossible for the entirety of the squad to be knocked out after Kansas Speedway this weekend, since just two will be eliminated, it’s not outside of the realm of possibility that both drivers sent packing will be ThorSport drivers. While Majeski and Rhodes are probably good to go for the Round of 8, Crafton and Eckes will be sweating things out, with each more than 45 points behind the leader and eighth-place Crafton 18 points behind seventh-place Rhodes.

And even then, just Majeski has looked the part of a potential Championship 4 competitor come Phoenix, thanks to his eight top fives and 12 top fives, tops of anyone in the ThorSport camp. Say both Crafton and Eckes make it through to the Round of 8 — can they be counted on to win their way into the final round? Can defending champion Rhodes?

On the other hand, check this out: in last year’s 22-race season, alongside its three wins, ThorSport — then comprised of Crafton, Sauter and Rhodes full time, plus Grant Enfinger for 12 races, Eckes for 10, Majeski for four and Paul Menard for two — accumulated 25 top fives and 52 top 10s among its ranks.

In 2022? Eighteen races in, though the team sits at just one victory, it’s also got 24 top fives and 45 top 10s. And that’s with its fifth truck, this year the No. 13, only having competed in three races, Sauter earning top fives in two of them.

So what, then? Is ThorSport, despite my initial feelings to the contrary, actually … better than before?

I mean, it’s certainly not worse. Not from a season-long standpoint, at least.

Which is what actually makes this weekend all the more important. And the weekend after that. And so on.

Because in the NASCAR playoffs era, the eventual outlook of one’s season is predicated on the final standings — which is not exactly much different than pre-playoffs times, except one’s year-end results are more strongly affected by what happens at the end of the season. A driver can be an absolute beast during the regular season, winning a half dozen races and looking like the championship favorite entering the playoffs, only to fizzle in the postseason and end up fifth or sixth in points.

It feels like there’s a possibility of that actually happening to ThorSport. Eckes finished 16th at Lucas Oil Indianapolis Raceway Park to kick off the playoffs and managed an eighth at Richmond Raceway; because of that coupled with no regular-season win — despite seven top fives and 10 top 10s in the regular season — he has a chance of being one of the first exits of the playoffs.

Then there’s Crafton, who has top 10s at both IRP and Richmond (ninth and seventh, respectively) but came into the playoffs with the least-impressive record of the group, at one top five and eight top 10s, putting him at a deficit to start the postseason. If there’s anyone who seemed least likely of the group to get into the Round of 8, it’s Crafton, and frankly, him dropping out after Kansas would have little bearing on ThorSport’s overall 2022 success.

Eckes might, though. As would Rhodes, who despite a runner-up finish at IRP had a disappointing 18th-place run at Richmond that leaves him more vulnerable than he’d like entering Kansas, especially if one of the drivers behind him in points (Crafton, Carson Hocevar and Eckes) wins and Rhodes himself has a disastrous weekend that leaves him low in the finishing order.

That being said, an 11th-hour streak can be done. Hell, entering this point last year, ThorSport had just two wins, both of which came with Rhodes and both of which were in the first two races of the 2021 season. Then Eckes scored the victory at Las Vegas Motor Speedway, and come Phoenix, Rhodes simply finished ahead of his playoff compatriots in third to secure the title.

And because of that title, ThorSport’s 2021 season is looked upon as a success, even if the team has been arguably stronger as a whole in 2022, when one considers its top-five and -10 marks (the latter still behind 2021’s amount but likely to pull closer or ahead with five races left) plus the fact that it managed to fill out 40% of the playoff grid.

That’s why Kansas is an important weekend for ThorSport, as is the Round of 8, regardless of how many of its teams qualify. Majeski excepted, the tides seem to have not been turning in ThorSport’s favor so far these 2022 playoffs — and if it can’t reverse course, coupled with just one visit to victory lane this year, it may eventually be a season to forget for the Ohio crew.