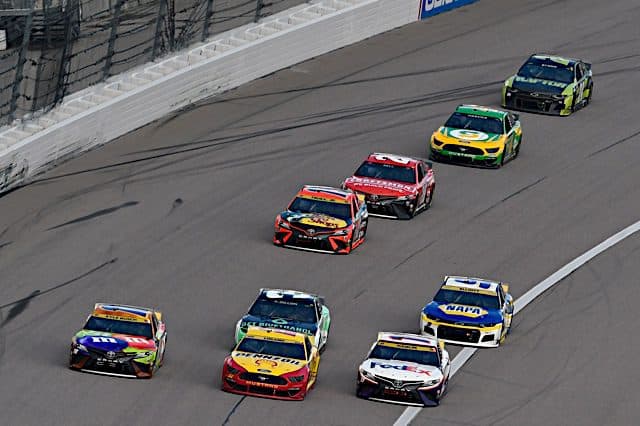 As if this weekend wasn’t chaotic enough with the NTT IndyCar Series finale at Laguna Seca, Formula 1 is also in action on Sunday (Sept. 11) and all three NASCAR divisions will take to the 1.5-mile Kansas oval over three days.

Each field headed to Kansas is in a different situation: the NASCAR Camping World Truck Series is in the cutoff race of its first playoff round; the NASCAR Xfinity Series is in its penultimate race of the regular season with plenty of playoff spots up for grabs; and the NASCAR Cup Series is at the midpoint of its first round, coming off a surprise Erik Jones win at Darlington Raceway and with the mayhem of Bristol Motor Speedway looming next week.

It’s worth saying that this is the only normal race of the first round of Cup’s postseason, but all three sets of drivers have things to prove. Let’s break all of this down.

After dates at Lucas Oil Indianapolis Raceway Park and Richmond Raceway, two Truck drivers are locked into the next round, two are below the cutline and six remain in the midst of the playoff fight.

My colleague Beth Lunkenheimer outlined all the clinching scenarios in Truckin’ Thursdays, so this will be brief, but elimination still stands on the horizon for two drivers. She also said that it feels like the series has had “6,000 years off,” which I can’t disagree with after nearly a month of zero Truck action.

Grant Enfinger and Chandler Smith are already locked in via wins at IRP and Richmond, respectively; the former has finished in the top five in both playoff races thus far and is getting hot at the right time, while Smith led 176 of 250 laps at Richmond en route to a dominant third win of the season.

Clinching situations outside of straight-up winning exist for several of those not locked in, but there’s an interesting amalgam of drivers in playoff purgatory. John Hunter Nemechek has cooled off after a five-win campaign in 2021, with just one win to his name this year, while Zane Smith scored three wins in the first eight races of 2022 but has yet to win since … well, Kansas. That was nearly four full months ago, but the No. 38 has finished in the top 10 in 15 of the 18 races so far this season.

None of the ThorSport Racing playoff quartet are safe as of yet. Semi-journeyman Ty Majeski has yet to win a race at one of NASCAR’s top three touring levels but has put together a solid 2022, recording 12 top 10s and currently sitting fifth in the playoff field. Matt Crafton‘s quiet 2022 led him to the postseason, but he’s riding the cut line and on the good side of it … for now. The No. 88 went to victory lane in the second race of the series’ Kansas doubleheader in mid-2020, scoring his third win overall at the track.

Fellow ThorSporters Ben Rhodes and Christian Eckes sit seventh and 10th in the standings, respectively. Rhodes, oddly, is considered one of the veterans of the field despite being just 25 years old. The defending champion has had a solid year thus far but just one win. Eckes has yet to visit victory lane in 2022 and sits in the cellar of the postseason points.

Stewart Friesen and Carson Hocevar represent each team’s lone entry in the playoffs, the former with Halmar Friesen Racing. Rounding out the playoff field is Hocevar, aka Mr. Oh-So-Close on multiple occasions in 2022. Hocevar’s led 242 laps, fourth among all drivers this year, but has two second-place finishes plus several other races in which it seemed the No. 42 had a chance at victory.

The uncertainty of the Truck Series’ visit to Kansas mirrors the odd season the division has had; just 10 of the 18 races so far have been won by series regulars. The other eight were won by interlopers from higher series (Cup’s William Byron, Ross Chastain, Kyle Busch and Todd Gilliland each scored one victory) or drivers running part-time schedules (Corey Heim twice, Ryan Preece and Parker Kligerman once each). There was a six-race, nearly two-month stretch when a full-timer didn’t go to victory lane in the series.

Though these boys may be too young to be singing the blues, two drivers will be on the outside looking in Friday night.

So far, seven of the 12 playoff spots are filled. We won’t worry about those guys.

What matters are the five spots remaining — yes, five, now that Jeremy Clements‘ Daytona International Speedway victory was nullified after teardown at the R&D center. That dropped him out of the playoffs unless the No. 51 can win another race or its penalty appeal.

No former winner at Kansas is hunting for a postseason berth, as past victors Ty Gibbs and Brandon Jones are already locked in. Sieg and Mayer both finished in the top 10 last year there, though, and the latter is looking to become the fourth and final JR Motorsports car in the playoffs.

Sheldon Creed is coming off a near-win at Darlington last week where he fought tooth and nail for the victory but ultimately came up short. Myatt Snider scored a top 10 at Kansas last year and sits way back in 16th, four spots outside of the postseason. Anthony Alfredo ended up on his roof at Kansas two years ago but is mired in 15th in points.

Similar to Cup, Kansas feels like the best chance for these drivers to solidify their standing in the points. Bristol will be utter chaos, as if the finish to last year’s night race between AJ Allmendinger and Austin Cindric wasn’t preview enough.

Before we say goodbye to the Yellow Brick Road, the main event of the weekend is set for Sunday.

I currently have the same inkling about Kansas that I do with Xfinity, just from an in-playoff mindset: Bristol is going to be absolute chaos, especially with non-playoff winner Erik Jones last week.

Chase Briscoe and Chase Elliott suffered significant misfortune early on when they both wrecked at Darlington Raceway; Briscoe is still below the cutline and Elliott plummeted from first to ninth in the standings.

There’s a level of confidence in both Trackhouse Racing Team cars, Ross Chastain and Daniel Suarez, to move on to the next round, but the No. 99 sits on the cut line.

Kansas has been the site of some oddly violent crashes in the past five years: Aric Almirola‘s injury and Jones’ airborne crash in 2017, William Byron‘s journey atop Ryan Newman’s car in 2018 and both Preece’s massive impact and Alfredo’s upending in 2020.

Six of the top 10 finishers in the spring were current playoff drivers, with Kyle Larson and Kyle Busch heading up the title contenders back in May. Denny Hamlin and Christopher Bell rounded out the top five then, boding well for a Toyota camp in need of solidifying a spot in the next round.

Chastain also recorded a top 10, as did Bowman, both of whom could use great runs after cooling off in the back half of the regular season.

The driver of the No. 19 has 15 top 10s at Kansas and a pair of wins, making him a prime suspect for the win and increasing the likelihood that NASCAR heads to Bristol with no drivers locked into the Round of 12.