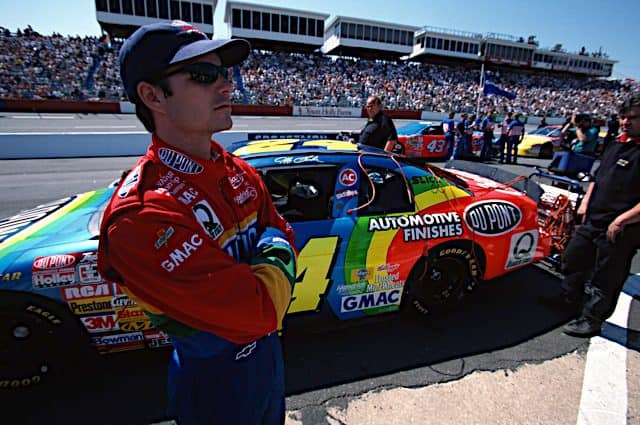 I never saw a race at North Wilkesboro Speedway. By the time I discovered NASCAR and automobile racing in 1997, it was a few months too late. The checkers had flown for the last time, perhaps appropriately, over young phenom Jeff Gordon as NASCAR ushered in a new era.

As the sport boomed, tracks like the one affectionately known simply as North Wilkes simply couldn’t accommodate the crowds the sport was attracting. Some tracks were selling out 100,000 seats with a waiting list for tickets. That many fans put a lot of strain on a facility, from parking to restrooms and concessions, to the local roads surrounding the track.

And so NASCAR, even as times were as good as they would ever be, left places like Wilkes County, N.C., behind.

Looking back on that last day at the half-mile oval that ran both up and downhill on the straights, the fans leaving the stands for the last time didn’t look like they had spent hours rooting on their favorite drivers and cheering for the finish. They didn’t look like folks who were out for a fine day at the racetrack. They looked like they were leaving the funeral of a cherished friend.

The gates closed behind them and the track stood empty, with only the changing seasons to record its passing days. Once-vibrant paint peeled, grass grew through cracks in the racing surface. Save for the hum of traffic on nearby Route 421, it was quiet, the roar of the engines and the crowd just memories. Maybe you could hear them on the air if the wind was just right, imagining the cars at full song on an early autumn afternoon.

Time marched on, and racers raced, now on mile-and-a-half-long monsters of tracks in places like Texas and Kansas City and in the shadow of Las Vegas’ glitter. The old-timers told stories of how things used to be as NASCAR’s history faded into the tapestry the sport was still weaving. New fans clamored for just about anything they could put their hands on with their favorite driver’s likeness or name. They sat in the stands at Auto Club Speedway and New Hampshire Motor Speedway and didn’t think about North Wilkesboro or Riverside Raceway or any of the other tracks lost to time and progress. If they listened to the old-timers’ stories, they might briefly wonder what it all had been like.

As I watched more and learned more, I began to understand and embrace those stories. NASCAR is a sport that only gets better when you understand who and what came before. The races that I attended every year at New Hampshire Motor Speedway came at a price; one of them had been taken from a little half-mile hundreds of miles and a lifetime away.

See also
Only Yesterday: The Year of Wire-to-Wire NASCAR Wins at New Hampshire

The years toiled on. The little track in the North Carolina hills sat silently, waiting for a day that seemed like it would never come. The grandstands loomed over Highway 421; I passed them often on my way to Bristol Motor Speedway or Boone, N.C. On my way to cover races at Bristol it looked despairing, as if the track herself was watching the racing world roll past and thinking of what she once was.

The people who remembered tried to bring her back to life; there were late-model races for a season or two, but the track was all but forgotten by then.

Wooden structures crumbled, year by year. Mother Nature eventually reclaims what humans have left behind. Colors faded, the words on the track walls and the boxes above the grandstands still legible but a time capsule of times gone by. The infield, long devoid of colorful cars and even more colorful people, housed a few bales of forlorn hay.

NASCAR continued to change unabated even after the throngs grew smaller. The sport crowned a champion seven times who had never raced in the confines of North Wilkes. The son of another seven-time champion seemed to be the only one in the sport who mourned her passing.

And still we all drove by on the way to Bristol, like one of those time-lapse films during which the days and weeks spin by faster than anyone is ready. A brief salute on the way by, and that was all.

As I grew from a brand-new face in the garage to building lasting relationships in the NASCAR world, winning a few accolades for my work and seeing entire careers come to fruition and then pass, I thought often about that old track, and I was sorry I would never see the Cup cars fly by that press box. Perhaps the only story I’d ever write about North Wilkesboro would be the day they tore her down.

As the fans who cared about history pleaded to save her, it became more unlikely with each passing year that she could even be saved. She sat forgotten, seemingly not even worth the cost of demolition and being laid to rest.

Then the whole world stopped.

For those few months when we all had to navigate a world where even the racecars stood still, little North Wilkesboro got remembered. That son of a champion led a small group to the track and pulled up the weeds that dotted the old asphalt so that it could be scanned with modern equipment in the hope that the original layout would never be forgotten.

Still, she seemed destined to live on only virtually, as that project also brought to light the extent of the damage that time had wrought. The Cup drivers almost made us forget her stare for a little while, but the decay was undeniable in real time.

The fans, even the ones who had come into the sport decades after the engines fell silent, enjoyed the nostalgia, and there was a flicker of hope that maybe, just maybe something could be done. But North Wilkes was so far gone.

NASCAR felt another shift — fans wanted more short tracks and road courses, and it began to respond. The new schedules featured more road courses, but viable short tracks are few and far between. Most are lacking in parking or restrooms or seating or safety features, and track owners were struggling after a year of not being able to race. They didn’t have the money to update and expand.

But one owner had the means — except the track was a relic. Nobody really dared ask again. After all, the owner had forgotten North Wilkesboro for so very long. Why should he remember now?

And as NASCAR returned to the dirt at Bristol Motor Speedway, then came the owner’s words: “We haven’t forgotten North Wilkesboro.” The son of a champion looked like a little boy on Christmas morning. And as the world started turning, the state of North Carolina remembered what had once brought people in droves: racing.

So the wealthy owner, spurred on by the son of a champion and his legion of fans, made a commitment: the track would again host races. Maybe not the Cup Series, maybe not even NASCAR, but North Wilkesboro would echo with the angry frustration of two score of racecars again someday.

Someday came last week, and the stands were packed. So many fans responded to the late model races that the track halted some of the grandstand demolition so they could fit them all in. They were still packed in wall to wall. They wanted to be a part of this resurrection. And this time, when they filed out to go home, they could laugh and whoop because they could hope that it wasn’t the last time.

And the locals, and the fans — and the fan in me — hoped beyond hope.

With that, the final message was sent. The television networks heard it. NASCAR heard it. And the track owner heard it.

North Wilkesboro Speedway is still a long way from being ready to host a Cup race. But eight months is a long time to bring her back to life. By the time the engines’ song fills the air again — the Cup Series engines — the transformation will be well on its way to the little half-mile nestled in the hills to come all the way back.

As racetracks across America draw their shutters and fade into the landscape, little North Wilkesboro Speedway rises from the ashes like a phoenix.

A generation of drivers has come and gone who never got to race North Wilkes. But generations to come will again fill the hills and valleys with color and sound.

The Wilkesboro area is indeed lucky that when the track was bought & raided for its race dates. It wasn’t bulldozed & sold off. It had to represent a sizeable investment to have sat fallow all these years. While I doubt it will ever host a Cup race. It’s the perfect venue for Trucks, Xfinity, & ARCA. As well as weekly shows, & concert venues. I can see it as home to an annual vintage race, & swap meet. Promotion is what the Smith family does best, & this is ripe for it.

I have to say that was well-written. Many have missed Wilkesboro and you hit the reasons why while stating how we got here. Thanks for the insight.

You seemed to fail to mention that Wilkesboro received $10 million in federal stimulus money and $7 million in NC economic funds to get this restarted. Your grandchildren will be paying. Did Smith chip in?