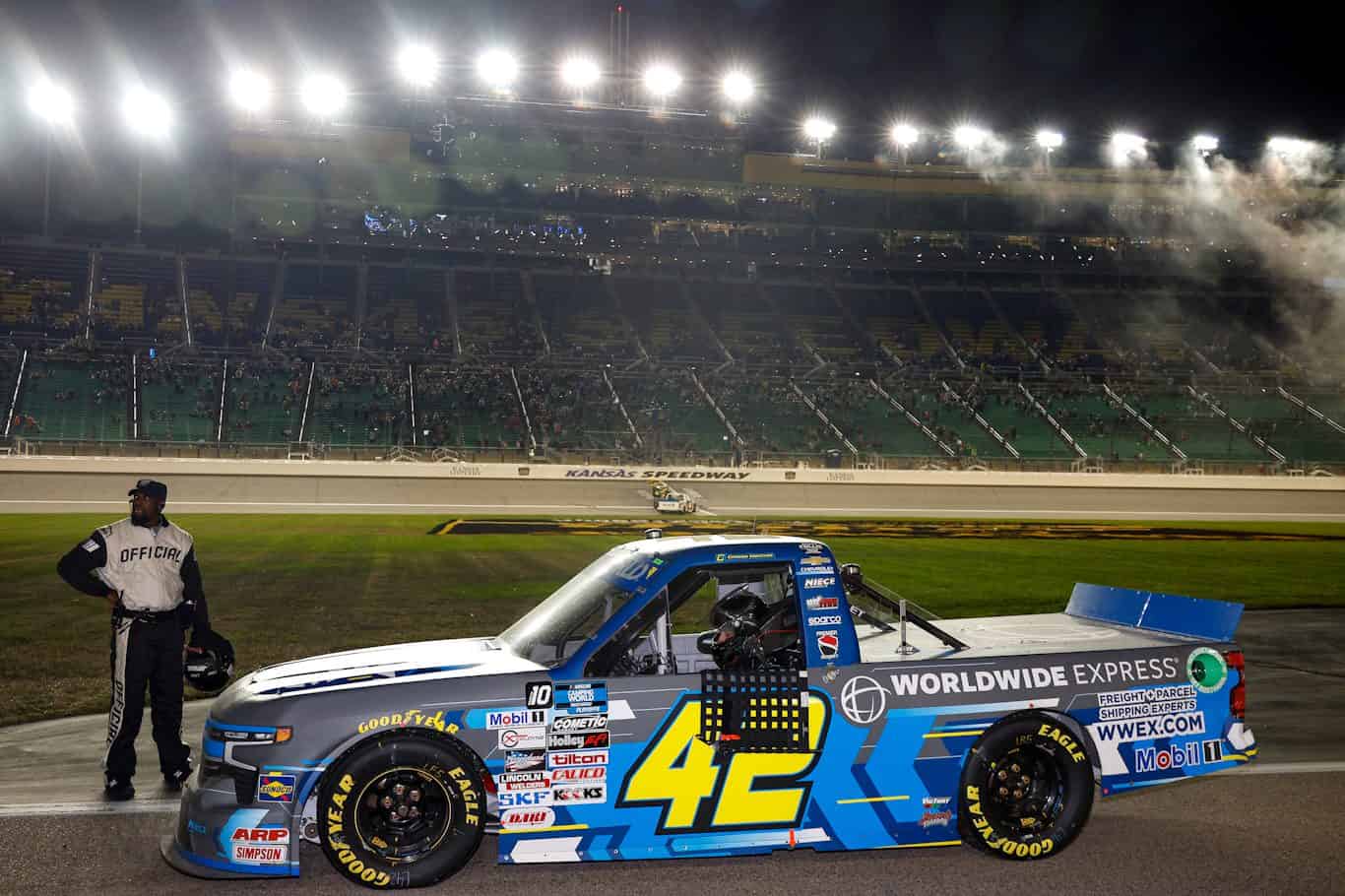 Carson Hocevar and crew chief Phil Gould swung for the fence and came up one lap short at Kansas Speedway — and Christian Eckes was the big benefactor.

The No. 42 team stretched its fuel mileage at the end of Friday night’s (Sept. 9) Kansas Lottery 200, as Hocevar needed a win to guarantee his advancement into the NASCAR Camping World Truck Series playoffs’ Round of 8. But Hocevar’s truck started sputtering coming to the white flag, allowing John Hunter Nemechek to pass him for the win on the final lap.

Hocevar hung on for second place, but it was not enough. Eckes beat him out for the final Round of 8 spot by three points via his 10th-place finish.

“I don’t know how you’re supposed to handle these,” Hocevar told FOX Sports post-race. “As many times as I’ve come close, I should be used to this.

“I’m gonna be a bridesmaid at my own wedding.”

Retweet to congratulate John Hunter Nemechek on a dominating day in Kansas! pic.twitter.com/1Ns2VTxKjo

Going into Friday’s race, Hocevar trailed Matt Crafton for the last Round of 8 spot by three points, while Eckes was six behind Crafton. Despite scoring four stage points on the night, Crafton faded to finish 15th, leaving the final spot between Hocevar and Eckes.

Eckes finished in the top four in the first two stages while Hocevar only scored one stage point, swinging the No. 98 driver ahead by eight points.

With Eckes having more points and speed than Hocevar, it was going to take a miracle for the No. 42 to come out ahead, and that’s almost what happened. The final caution came out on lap 74 of 134 when Brett Moffitt‘s truck caught on fire, and Hocevar topped off with fuel on lap 80.

Gould then had Hocevar stay out as the majority of the field cycled through green-flag pit stops.

Eckes thought his playoff hopes went up in smoke when he saw the No. 42 team’s gamble.

Despite it seeming like Nemechek had enough pace to catch Hocevar for the lead, the team was relaying to Hocevar that he could finish second and still be good on points. That was true, as Eckes ran 13th at the time. But Eckes made a hard charge in the closing laps to climb up to 10th and make sure second wasn’t an option for Hocevar.

It just seems like they missed the reason that Carson didn’t get in. It was because Eckes gained spots in the last 10 laps that wasn’t being covered. It’s pretty simple that if 42 doesn’t win he needs to finish X number of spots ahead of Eckes to get in. Then monitor that.

Then Hocevar’s championship contention was completely eliminated when he ran out of gas and Nemechek passed him for the win.

“That was stressful for sure,” Eckes said. “I actually went over to John Hunter and thanked him. He wrecked the hell out of me at Sonoma, but I guess I’m his biggest fan tonight.”

While Eckes lives to fight another round, the ThorSport Racing driver knows the team has to be better in order to contend for the title.

“I wish we finished a little bit better,” Eckes said. “We wanted a win just to reestablish ourselves, but to get onto the next round is OK for us. We’ll just keep pushing.”

As for Hocevar, he’s left thinking what if. In fact, there was one particular corner Hocevar was already replaying in his head after the race. Derek Kraus had a flat tire during the final run, and Hocevar lost time behind him — time that could have allowed him to save more fuel or have a larger lead for Nemechek to erase.

“I thought I saved too much and could’ve gone harder and built the gap,” Hocevar said. “… The [No.] 19 had an issue, and I lost three seconds there. Looking back, I wish I could’ve got those back. … I mean how are you supposed to know the [No.] 19 is going to have a flat right in front of me?”

The fuel strategy by Gould gave Hocevar a fighting chance though, something the speed of the truck on Friday night lacked. Hocevar joked about Kyle Busch‘s silly season rumors as something that needs to happen for him to have something for Kyle Busch Motorsports driver Nemechek next year.

“We were nowhere near the best car,” Hocevar said. “Kyle needs to go to Kaulig [Racing] or RCR [Richard Childress Racing] or wherever he is going so that I don’t have to run against the 4 truck as much. Seems like I always run second to them.”