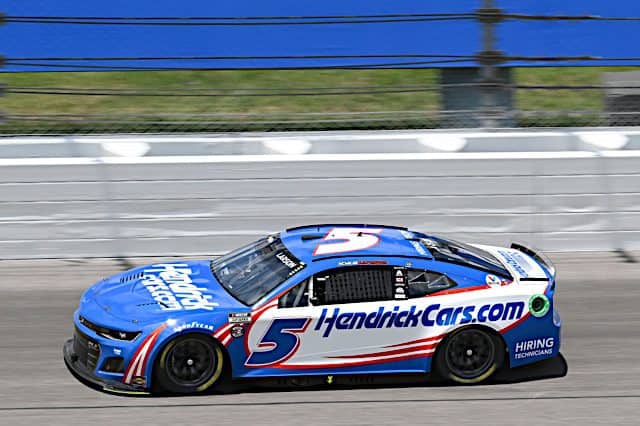 It’s time to see if Patrick Mahomes will win over the Arizona Cardinals without his top receiver … oh wait, wrong fantasy DraftKings sport.

The NASCAR Cup Series heads to Kansas Speedway for the second race in the playoffs this Sunday, Sept. 11 (3 p.m. ET, USA Network). Which drivers should be on your daily fantasy NASCAR DraftKings radar for the Hollywood Casino 400? Read on to find out!

The last time Cup raced on this 1.5-mile course, Kurt Busch came out on top after leading 116 circuits. However, he’s still sidelined with concussion-like symptoms, making it anyone’s race to win this week.

The series competed at four different 1.5-mile racetracks this year, but I’m excluding Atlanta Motor Speedway from my research since the style is more like a superspeedway than a regular intermediate. Instead, I added Auto Club Speedway, Pocono Raceway and Michigan International Speedway to this group of tracks since all three are high-speed facilities that ran a bit similar to Kansas with the sport’s new Next Gen chassis.

See also
NASCAR 101: Toto, I Have a Feeling We’re Back in Kansas

As usual, be sure to check out practice and qualifying results to see whether the same drivers who had speed in May are fast this time around. Practice starts Sept. 10 at 12:05 p.m. ET and airs on USA Network. Qualifying will then take place at 12:50 p.m. ET.

Before I share which drivers I’m considering for this week, here’s a look back at Darlington Raceway:

I may have jinxed Kevin Harvick when I said he caught fire in the last month; his car literally caught fire at Darlington. Oops. The mishap resulted in a negative score for unHappy Harvick, a stumbling block which set this lineup back. Also, Kyle Larson had some issues early on and didn’t lead any laps. He wound up finishing five spots worse than where he started, so his DraftKings total wasn’t where I would have liked it. At least I had the winner (Erik Jones!) in this lineup.

A score of 190.4 in the $1 multi-entry double up was the lowest one needed to win some money. In the $5,000 Quarter Jukebox tournament, the highest DraftKings total was 254.75 and had Denny Hamlin, Joey Logano, William Byron, Jones, Brad Keselowski and Cole Custer.

I’m trying Larson again for a couple of reasons. First, after I studied his results of Auto Club, Michigan, Pocono, Kansas, Las Vegas Motor Speedway and Charlotte Motor Speedway this year, I came up with a 4.3 average finish. That’s incredible for a driver with just two wins on the year. Larson won at Auto Club in February and didn’t win again until Watkins Glen International last month. However, he placed second at both LVMS and Kansas and came home ninth at Charlotte, helping his average.

In May at Kansas, Larson had the third-best green flag speed and ran, on average, in about sixth place before crossing the line in second. Last fall, he claimed the checkered, while in 2018 he was fourth in the spring and third in the fall.

But Larson hasn’t just had some good results; he’s also led 351 total laps in his past four Kansas events (which includes 2019, as he was out for much of 2020 and missed those races that year).

Hopefully, the reigning Cup champ has better luck than he did last week at Darlington, getting out front and leading laps.

One manufacturer that was pretty quick at Kansas was Toyota, and that includes the No. 20 of Christopher Bell. Though Bell ran, on average, in eighth place this past spring, he had the fourth-best green flag speed. He also led 37 laps en route to fifth place. In some other Kansas events, Bell was eighth in October 2021, and the previous year, he went from 22nd to 10th driving for now defunct Leavine Family Racing. It was one of just seven top-10 finishes Bell had during a difficult year.

Additionally, the Joe Gibbs Racing driver had pretty good results at other intermediate racetracks. Bell led 32 laps at Las Vegas before coming home 10th. Plus, at Charlotte, he crossed the line in fifth, just a few spots behind teammates Hamlin and Kyle Busch. Lastly, at Pocono, Bell placed fourth. These results indicate he’ll have a good finish this weekend at Kansas, as long as he keeps his car clean.

This may come as a surprise, but Alex Bowman has actually done well on the intermediate courses. It helps that his lone victory of the season came at Vegas but he’s flashed some consistency across the board. The Hendrick Motorsports driver was ninth at Kansas, 10th in the Coca-Cola 600 and ninth at Michigan after starting 30th.

I still remember the time in 2019 when Bowman nearly won Kansas, ultimately finishing behind Keselowski. Still, Bowman led 63 circuits in that event. He also had a couple of top 10s in 2020, finishing eighth in the first event and third that fall.

Though Bowman has had some rough races since mid-June (four finishes worse than 30th), if he and his team can recapture the speed they had earlier this year, he’ll be one to watch as a dark horse pick for the win.

These stats aren’t flashy for Bubba Wallace, but bear with me for a second. His only top 10 at Kansas came this year after he started 24th, and that came after his pit crew incurred some penalties during the race. He had to drive through the field multiple times and possibly could have contended for the win with his teammate had he been able to stay up front.

Last fall, Wallace gained 13 positions to end in 14th, while in October 2020, he earned another finish in the teens (18th) after starting 24th.

After some pit crew members were switched with Bell’s organization midseason, Wallace saw some better finishes. He brought home an eighth at Pocono and nearly won Michigan, coming in second to Harvick. And last week at Darlington, he ended in ninth as he battles for the owner’s championship in 23XI Racing’s No. 45.

Wallace should be able to earn a good finish once again this Sunday while fighting to advance to that owner’s Round of 12.

Ty Gibbs has some respectable Cup Series finishes filling in for Kurt Busch, earning results mostly between 10th and 17th. Two exceptions were Richmond Raceway last month, when he had a mechanical issue, along with some struggles at Watkins Glen. Gibbs’ best finish with the team, though, came at the two-mile oval out in Michigan.

Though Gibbs hasn’t run at Kansas in Cup yet, he won the NASCAR Xfinity Series race there last year. And this season, he has a 5.167 NXS average finish at intermediate courses, including Texas Motor Speedway. Gibbs is too talented to not trust in daily fantasy and I wouldn’t be surprised if he scored another top 10 this weekend.

There are some good options in this range, but since this column was written before practice and qualifying, I decided to roll the dice on Ty Dillon. Early on in his Cup career, he earned a couple of Kansas finishes in the teens (2017). He added another one, a 15th, in the July 2020 event.

What’s good about those results for Dillon is he advanced his position in all three races (the most being 21 spots in 2020). The extra position differential points can go far, especially for someone whose DraftKings salary sits under $6,000.

Dillon’s improved his position by a similar amount in several races this year for Petty GMS Motorsports. He gained 12 spots on the way to 20th at Las Vegas and 15 positions at Charlotte, earning a 13th-place finish. At Michigan, he moved up by double digits there as well, ending the race in 14th. These types of tracks seem to suit him, and for a driver who’s fighting for another ride next year, a good finish this weekend would help his cause (and likely add money to your pockets).