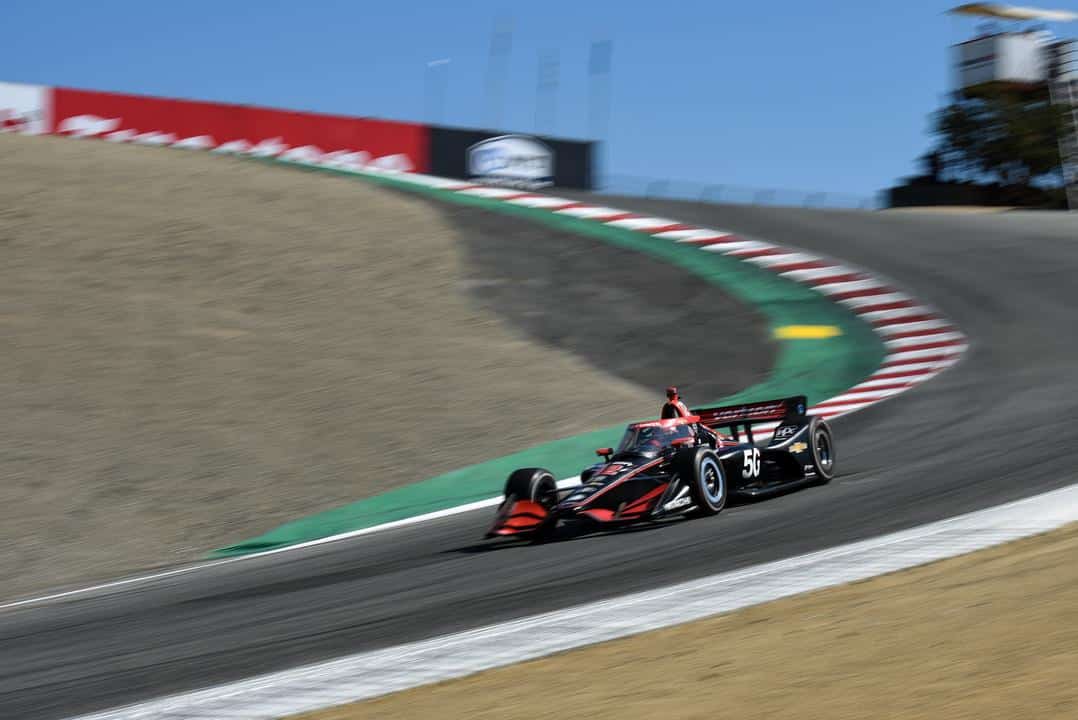 Laguna Seca returns as the site of the season finale after pandemic concerns bumped the streets of Long Beach to the deciding role in 2021. California’s most famous permanent road course is no stranger to holding the title decider: it was the CART finale from 1983 to 1996, and in that role gave us arguably the most spectacular moment in American open-wheel road racing, Alex Zanardi’s last-second move on Bryan Herta in the Corkscrew that has come to be known simply as “The Pass.”

Check out Alex Zanardi's move on Bryan Herta in the Corkscrew to win at @WeatherTechRcwy Laguna Seca. #INDYCAR pic.twitter.com/jGGoGASTsI

Hoping to finish one spot better than his father did 26 years ago, Andretti Autosport’s Colton Herta is already having one heck of a week. On top of serious buzz linking the 22-year-old Californian to an AlphaTauri Formula 1 seat in 2023, Herta is the only driver to win at Laguna Seca since it returned to the IndyCar schedule in 2019, and enters the weekend the obvious favorite for the race win.

Unfortunately, he can finish no better than eighth in the championship standings after a year plagued by inconsistencies, and at any point the FIA could decide to deny him a Super License, crushing his F1 dreams for the time being. Still, the smart money is on Herta this weekend.

With a 20-point advantage over (joint) second place, Team Penske’s Will Power is likewise a strong pick to earn his second IndyCar title. However, no Penske driver finished better than seventh in this race last year, and while the Penske squad recovered from last year’s poor Portland showing to dominate that race this year, they will have to do so without the benefit of a mid-season test at the track. Josef Newgarden, ranked second, is in a similar boat.

Only one more race to go.

This is the 17th consecutive season the championship will be decided at the season finale.#INDYCAR // #DEFYEVERYTHING pic.twitter.com/MHk8aMGfTz

Instead, while Penske tested at Portland, six-time champion Scott Dixon and his Chip Ganassi Racing team took to the track at Laguna Seca. After recovering from a mid-pack qualifying run to stand on the podium and keep his title hopes alive last time out, Dixon will surely be a factor before the day is done. “The Iceman” is no stranger to down-to-the-wire battles for the Astor Cup, and anyone’s route to the championship is going to have to go through him.

Ganassi’s other driver in the title fight is Indianapolis 500 winner Marcus Ericsson, a distant 39 points back of Power. He and Penske tail gunner Scott McLaughlin will need rivals to struggle if either is to hoist the Astor, but there’s no better tonic for a season of what might have been than a win in the finale to build momentum into the off-season. While both face a title battle as uphill as the famous Rahal Straight, neither should be counted out of a strong run on Sunday.

Sitting sixth in the standings (the first driver out) is 2021 champion Alex Palou. A winless 2022 was not what anybody expected from the talented third-year driver, and a lengthy legal battle over the services of the Spaniard for 2023 has overshadowed his on-track performances.

Last year, it was a strong run to second place at Laguna that put rival Pato O’Ward on the back foot in the Long Beach finale, and after running fastest in the open test at the track, Palou could be set to leave 2022 (and potentially CGR) on some semblance of a high note.

Though largely absent from the front of the field since Long Beach in April, Romain Grosjean truly found his place in IndyCar with a full-contact run to third place in this race last year. The Swiss Frenchman certainly hasn’t had the season he’d hoped for since switching to Andretti Autosport at the end of last year, but a repeat of last year’s performance could give the No. 28 team the push they need to turn things around for 2023.

If you no longer go for a gap…👀#IndyCar #Motorsport pic.twitter.com/BPenc4PjNH