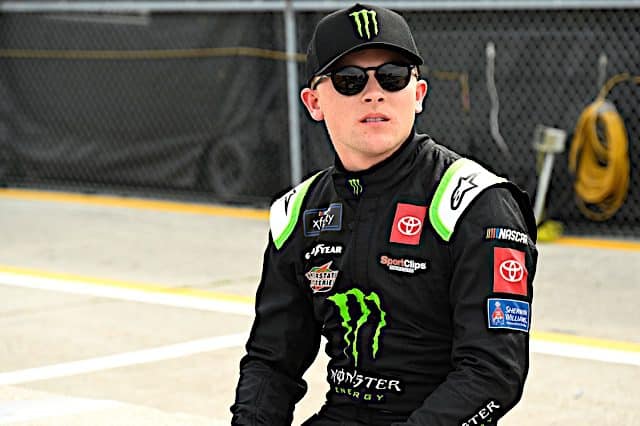 Ty Gibbs had the dominant car in the NASCAR Xfinity Series race at Kansas Speedway, but he ended up third after rain brought an early conclusion to Saturday’s (Sept. 10) Kansas Lottery 300.

Drivers went into Saturday expecting a full 200-lap race, but the race was suspended by heavy rain and ended with Noah Gragson out front, scoring the victory.

While Gragson celebrated the 10th win of his Xfinity career and his second in a row, Gibbs was left empty-handed after a string of late cautions shuffled him out of the lead after dominating.

Gibbs started the day with a front row starting spot, and he first took the lead from polesitter and teammate Brandon Jones on lap 5. It was smooth sailing from there for Gibbs, as he cruised to a stage one win and led all but five of the first 71 laps. During this time, Gragson clawed his way up to second after fading back to eighth at the start.

With Gibbs pacing Gragson at the beginning of stage two, there was a strategy shakeup in the front of the field after Jeremy Clements crashed and brought out the caution on lap 70. With 20 laps to go in the stage, there was a split decision on pit road as Gibbs, Gragson and other frontrunners pitted for tires while Brett Moffitt, playoff contender Ryan Sieg and new leader Austin Hill stayed out.

With a restart on lap 76, Gibbs started in the second row of the outside while Gragson started in the third row of the inside. That proved to be the deciding factor of the race, as Gragson quickly picked his way through traffic while Gibbs was stuck behind a slower Moffitt on the outside. By the time the dust had settled, it was Gragson out front with his JR Motorsports teammate Justin Allgaier in second; Gibbs now had to chase them down from third.

With a two-second deficit to Gragson, it would be a tall order for Gibbs to track him down with 10 laps to go in the stage. However, Gibbs received a glimmer of hope after a questionable call by NASCAR to put the caution out for rain on lap 82.

However, it was not raining. Rain was anticipated in the upcoming laps, but caution was put out before the rain arrived. Race control did the same thing in the Xfinity race at Darlington Raceway last weekend, as the caution was out for a good five laps before the rain hit.

When it became clear that the rain wouldn’t come, the field was reset for a two-lap shootout to decide the conclusion of stage two. Gibbs restarted in third on lap 89, and while he had a run on Gragson in turn 2 of lap 90, the door was slammed shut and Gibbs was left battling Allgaier for second place in the stage. The pair made contact out of turn 4 and Gibbs rammed the side of Allgaier’s car in frustration right before the duo crossed the finish line for the end of the stage.

During a rain delay interview, Gibbs said that he made a mistake in choosing the outside lane for the lap 76 restart. He also apologized to Allgaier and the No. 7 team for the contact and said that his emotions got the best of him.

“We have a very fast Reser’s Toyota Supra and I feel like we were good, just got in a weird restart line when the three guys stayed out and I just took the wrong line,” Gibbs told NBC Sports during the rain delay. “I thought it was the right line, but it wasn’t. We went back racing, and off of [turn] 4 I make contact with Justin. I felt like I hit the wall harder than I did, I didn’t, and I got mad and went down to hit him in the door. The stupid part is it hurt my car more than it hurt his.

“That’s just inexcusable from me and I’m very disappointed in my actions and I apologize to them. I thought [the contact] was worse than it was, and when I watched it on TV it wasn’t. I apologize to (crew chief) Jason [Burdett], Justin and Dale [Earnhardt Jr.] and the whole No. 7 group. I just can’t be doing that.”

While Gibbs would normally have 110 laps to take the lead back, the two-lap shootout to decide stage two ended up deciding the race. The rain finally hit under the stage caution and the race was red flagged after 93 completed laps.

The remaining 107 laps were canceled after less than an hour of waiting. While Gragson was victorious for the fifth time in 2022, Gibbs had to settle for third after leading 66 of the 93 laps in the Kansas Lottery 139.5.

What happened to the event having to reach half way to be official? Another made up as we go “rule” change?