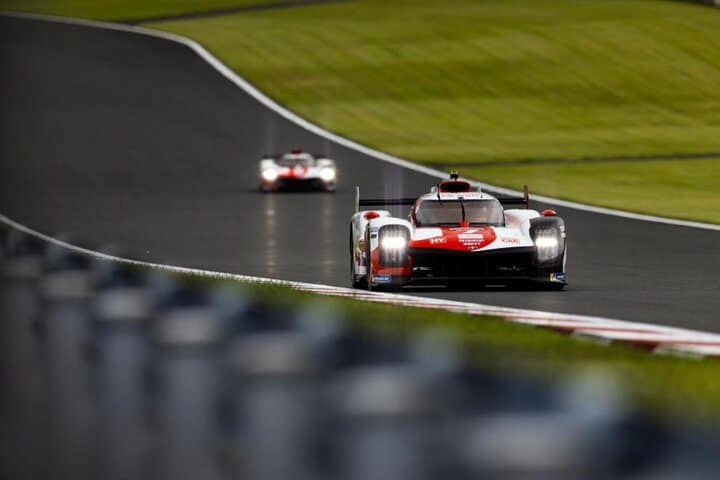 Toyota GAZOO Racing’s Kamui Kobayashi claimed the overall pole for Saturday night’s FIA World Endurance Championship 6 Hours of Fuji with a lap at 114.373 mph.  It is Kobayashi’s first pole of 2022 and Toyota’s second of the year in five races.

“Pole position [is a] great feeling,” Kobayashi said after the session.  “We were very happy with the performance.  [Fuji Speedway] is the second priority for our team [after Le Mans].  I think I’m pretty happy.  We’ve put a lot of work into the car and we’ve shown that they work well.”

Kobayashi set his quick time on his first lap at speed.  He was a mere two-hundredths of a second faster than teammate Brendon Hartley.  Signatech Alpine’s Matthieu Vaxiviere qualified third, followed by Peugeot TotalEnergies’ Jean-Eric Vergne and Loic Duval.

LMP2 saw a number of teams making pit stops for tires during the 10-minute session.  Such a move would substantially cut down on the amount of time to set a quick time.  For instance, United Autosports’ Filipe Albuquerque stopped after his out lap for four fresh tires.  Others chose to run the full 10 minutes on the tires put on the car at the start.

The strategy really didn’t work out for United Autosports as they ended up further down the order than they normally would be.  Instead, it was JOTA Sport’s Antonio Felix da Costa who claimed the class pole with a lap at 111.360 mph, good for sixth overall.

Da Costa’s strength was clearly in the third sector on his lap.  No one could turn in a time within a half-second of the No. 38, even if they were faster in the first two sectors.  Da Costa ultimately won the class pole by .280 seconds over AF Corse’s Nicklas Nielsen, who also claimed the Pro-Am subclass pole.

With only 10 minutes to spare, there isn’t much time to dawdle.  Even with reasonably quick warmup laps, it was a full five minutes before anyone set a time in the GTE-Pro class.  Porsche GT Team’s Michael Christensen put himself at the top of the chart with the first lap set in the class.  That lap at 105.903 mph, held up to win the class pole.

Christensen’s lap was .195 seconds quicker than AF Corse’s James Calado in the No. 51 Ferrari.  Gianmaria Bruni was third in the second Porsche, but had a chance at pole late before losing time.  Miguel Molina was fourth quickest, then Nick Tandy in the Corvette.

In GTE-Am, Dempsey-Proton Racing’s Christian Ried was quickest early on in his Porsche, but that lap was usurped by Sarah Bovy in the Iron Dames Ferrari, who was going for her second straight class pole.  Ultimately, TF Sport’s Ben Keating claimed the pole in his Aston Martin with a lap at 102.770 mph.

Keating’s lap was .062 seconds faster than Bovy.  Spirit of Race’s Franck Dezoteux was third in his Ferrari, then D’Station Racing’s Satoshi Hoshino.  Team Project 1’s Nicolas Leutwiler was fifth in the fastest of the GTE-Am Porsche.

There were no red flags during the GT session, but there was one scary moment.  Dezoteux spun his Ferrari exiting turn 15 with 20 seconds remaining, eliminating any chance at further improvement.  A simple spin.  However, Dezoteux’s rejoin was frightening as he drove counter to traffic and crossed the track directly in front of  Hoshino.  No contact was made, but the move was definitely inappropriate.