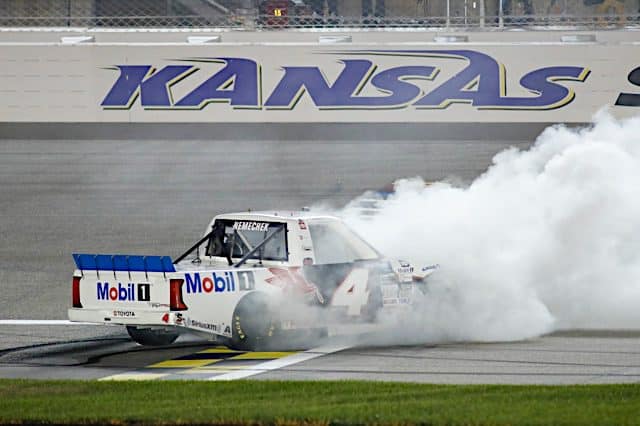 After Chandler Smith dominated at Richmond Raceway en route to the win, his teammate John Hunter Nemechek won the pole and swept all three stages in a dominating win at Kansas Speedway on Friday (Sept. 9). Nemechek made a last-lap pass on Carson Hocevar, who made a gutsy pit call and ran out of gas a half a lap from the finish.

Nemechek’s 13th career Truck Series victory also featured a statistical anomaly, as Frontstretch junior editor Stephen Stumpf noted. Nemechek has 13 wins at 13 different tracks. He has the most wins of any driver in Truck Series history without a repeat victory at a racetrack.

The Kansas Lottery 200 was the final race of the Round of 10. Hocevar’s gamble came up three points shy of advancing, so his second straight playoff run ended with heartbreak. Meanwhile, after starting seventh, three-time Truck Series champion Matt Crafton finished 15th and his quest for another title ended as well.

A gutsy call from crew chief Phil Gould on a pit stop under caution with 56 laps to go put Hocevar in a prime position to win, provided a self-described miracle happened. The miracle? Hoping the race would stay green to the end.

Miraculously, the No. 42 teams’ prayers for a caution-free end happened. Unfortunately, the fuel ran dry with about half a lap to go, costing Hocevar, once again, his first career victory.

Even worse, despite the great finish, Hocevar was eliminated from the playoffs as his main competitor, Christian Eckes, gained a ton of stage points and made up a handful of positions in the closing laps, bumping Hocevar from the Round of 8 by just three points.

Despite his disappointment in his post-race interview, Hocevar should be proud of his great season thus far and should now focus on both scoring his first career victory and making his Niece Motorsports team better in 2023. His first Truck win is coming. It’s only a matter of time.

In a caution-free stage one, polesitter Nemechek and fellow playoff driver Ty Majeski combined to lead all 30 laps, with Nemechek as the driver to come out on top and win stage one.

After the green flag waved, Nemechek rocketed out to the lead, but Majeski moved to second and eventually ran down Nemechek for the lead on lap 8. But the lapped car of Tyler Hill held Majeski up enough for Majeski to lift off the gas on his No. 66 in turn four, which allowed Nemechek to take the lead back on lap 23.

As Nemechek continued to dominate stage two, Bayley Currey spun his No. 44 Niece Motorsports Chevrolet in turn 1, four laps from the end of the stage. Instead of trying to make it a quickie yellow to get even a one-lap shootout, NASCAR decided to end the stage, allowing Nemechek to sweep both the stages.

Nemechek now has two victories and six stage wins this season, vital to his hopes of advancing from the upcoming Round of 8 to the coveted Championship 4.

Playoff driver Stewart Friesen benefitted from that caution. Several laps earlier, Friesen reported something didn’t feel right in his No. 52. It showed, too, as the No. 52 started going the wrong way in traffic about halfway through stage two. Friesen did not earn any points in the second stage.

Ultimately, Friesen wound up one lap down in 20th place.

Along with Hocevar, Crafton’s less-than-stellar night at Kansas eliminated him from the playoffs. Crafton entered three points above Hocevar but left last in the playoffs, 18 points out.

Enfinger and Chandler Smith entered the race as the only drivers locked in by virtue of their wins at Lucas Oil Indianapolis Raceway Park and Richmond, respectively. By the end of stage two, Nemechek, Zane Smith and Majeski had earned enough stage points to lock themselves into the next round. Meanwhile, Friesen and Ben Rhodes had good enough nights, sans Friesen’s stage two troubles, to advance at the end of the night.

Eckes, as mentioned earlier, gained several spots after the final round of pit stops to gain valuable points, but Eckes also had a little luck come his way when Hocevar’s fuel gamble faltered.

Corey Heim is almost a guaranteed lock for Rookie of the Year, as his seventh-place finish opens up his point lead even further in the rookie standings. He leads Lawless Alan by 124 points, more than two races worth with only four races left in the season.

Rhodes’ night was quiet, but his bright orange No. 99 Kubota Toyota was one of the most vibrant of the night. It was nice to see a new sponsor enter the sport, and in an era where ThorSport Racing Toyotas are primarily silver in color, the orange was a nice change-up for the defending champion and his team.