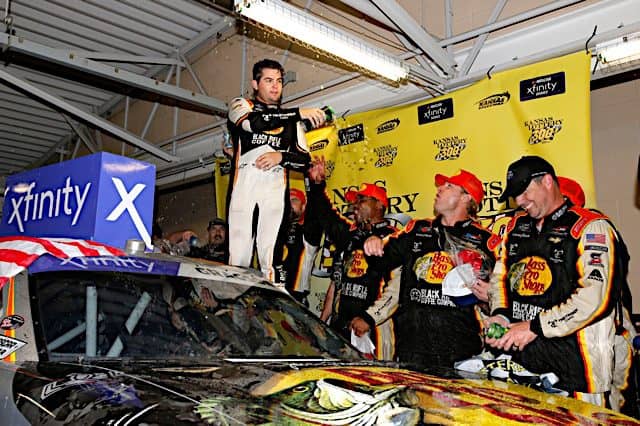 Justin Allgaier, Ty Gibbs, polesitter Brandon Jones and Ross Chastain filed in behind him to round out the top five, in second through fifth place, respectively, in a very short, very sad way.

In case you couldn’t tell, this wasn’t my favorite race of the year so far by any means. However, we’ve still got plenty to discuss from playoff spots to some pretty interesting NASCAR history.

Absolutely nobody except for Gragson is happy with Saturday’s race.

Gragson picked up his fifth win of the season, and he also picked up the stage two win, giving him 13 overall in 2022. Gragson now is tied for the second-most stage wins in a single season as well as third-most all-time. Although Gragson is graduating to NASCAR Cup Series full-time racing next year, he still has eight races remaining in the 2022 season to add to his already-impressive total.

That's 13 stage wins for @NoahGragson in 2022, tied for 2nd-most in an #XfinitySeries season & we haven't reached the #NASCARPlayoffs yet.

Even though they might not be true winners in this one, the race held quite the silver lining for Sam Mayer and Riley Herbst. With their finishes of ninth and 16th respectively, both drivers have clinched a spot in the playoffs on points. Now, if one of them wins, that shakes up everything entirely, but we’ll only cross that bridge if we get there.

Quite literally every fan of racing in history hates when the weather gets in the way of said racing. When the weather completely stops or changes races, though, they become irate, and that’s what happened on Saturday.

A vast multitude of fans took to Twitter to voice their displeasure, so I thought it’d make for a great bonding experience if we all just shared in those tweets together. Shall we?

Does anybody else feal cheated? I mean this is supposed to be a 200 lap race, and we get 94 laps…hell, only like 70 of them were actually green flag laps.

First off, we’ve got this little gem. I wholeheartedly agree with you, but there are many more factors at play here. First and foremost, the forecast for the remainder of Saturday was dismal, at best, and since NASCAR had reached its official point and the weather was less-than-promising, it made little sense to have teams and fans sit around waiting for what likely would have been an inevitable conclusion anyway. Add in the ARCA Menards Series race that was scheduled after the Xfinity race and you’ve got some different logistics with teams, network partners, etc. to work with. That said, the ARCA ultimately ended up being postponed as well, so it’s highly likely waiting out the rain would have been all for naught.

why not race 10 a.m. sunday morning to get in a full race.

See, Donald here is onto something, or at least he would be if the race hadn’t completed the second stage. That rule was put into place at the same time that stage racing was introduced, and typically doesn’t come into play unless it’s a situation like Saturday’s. NASCAR already moved up the race start in hopes of beating out the rain, which was actually scheduled to arrive after what should have been a completed Xfinity race. But as we all know, weather is quite unpredictable and, in this case, it didn’t work out in NASCAR’s favor.

This week’s scheme of the week goes to none other than Gibbs in the No. 54 Reser’s Fine Foods Toyota. I’m a sucker for two tones, and the neutrality of the two colors made the red accents really stick out. The car looked poised for victory lane after Gibbs grabbed the stage one win, but a bad-fast Gragson wouldn’t let that be.

As we covered earlier, Mayer and Herbst clinched spots in the playoffs on points, so they’re in whether they win a race or not at the moment. Currently, there is one race left until the playoffs begin with three open playoff berths. However, that number could change this week if Jeremy Clements‘ appeal of his penalty following his Daytona International Speedway victory is successfully overturned.

Jeremy Clements appeal will be heard next Tuesday (Sept 13).

Reigning series champion Daniel Hemric is 50 points above the cut line and his Kaulig Racing teammate Landon Cassill is 33 points above it. Ryan Sieg leads Sheldon Creed by a whopping 13 points for the 12th and final spot in the championship standings. For those two, it’s sure to be a sprint to the finish of the regular season with just a night race at Bristol Motor Speedway left before the playoffs begin.

This week’s FFT is going to be a bit of a history lesson. But first, how did we get here?

To my knowledge, prior to the Stage Era in @NASCAR, only 2* races had been called prior to halfway in 1960s.

The @MartinsvilleSwy race was declared to be 200 laps when shortened.

The 1961 NASCAR Cup Series event at Martinsville Speedway was stopped before the originally planned halfway point of the 500-lap race. There was rain in the area, and thus NASCAR decided that the race would only be 200 laps. They didn’t even finish the 200 laps though, as Fred Lorenzen won the race in just 149 laps, leading the final 31 laps. The Virginia 500 was rescheduled to three weeks later on April 30, and Junior Johnson won that race.

The second occurrence came at another half-mile short track, Concord Speedway in Concord, North Carolina on February 25, 1962. That race was actually supposed to be 200 laps but it was called due to rain on lap 78. NASCAR Hall of Fame driver, and 1961 and 1962 Cup champion Joe Weatherly led every lap en route to capturing the checkered flag. But what did NASCAR do after only running 39% of the race? It only gave out half of the winnings and points, of course. Could you imagine if that happened today?

We already hit on it earlier, but it’s Bristol, baby (fall edition)! This will be the first Xfinity race of the year at the famed track, so expect some of the more inexperienced drivers to struggle on the 0.533-mile short track. The green flag for the Food City 300 flies at 7:30 p.m. ET on Friday, September 16. That race will be aired on USA Network, the Performance Racing Network and Sirius XM NASCAR.

If they started races at 1 PM they used to, this race could have been complete