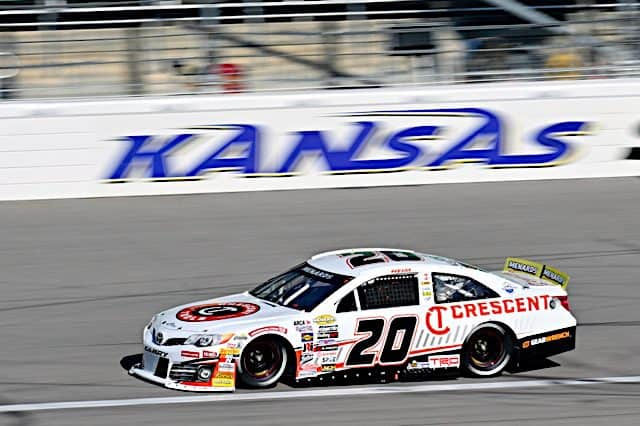 In the earlier ARCA Menards Series event at Kansas Speedway, Corey Heim had a race-winning No. 20 Venturini Motorsports Toyota. However, he wound up with a DNF due to his involvement in a crash. On Sunday morning (September 11), Heim dominated again at the 1.5-mile track as he captured the Kansas Lottery 150 victory.

Heim won the pole on Saturday, the planned race date for the series. However, rain forced series officials to postpone the race to Sunday morning. The postponement didn’t affect Heim. He led the most laps and fended off the competition on several restarts.

Overall, Heim earned his second ARCA win at Kansas, his second win of the season and the ninth ARCA win of his career.

“Thank you to Venturini Motorsports, Billy Venturini, the whole Venturini family, I wouldn’t be here without them and Shannon Rursch, everyone on this No. 20 team does such a phenomenal job on this Crescent Tools Camry<” Heim told MAVTV Motorsports Network in victory lane. “It was definitely a great performance for us from what we had in the spring. Going through that adversity, I feel like we should’ve had a similar performance to what we had in the spring. To come back here and put on a show like that, it’s pretty special.

It’s redemption for sure. I feel like we should’ve had both, you know. But at the end of the day, we’re here at victory lane at Kansas, the place where I got my first win, it’s so special for me. It always has been. I’ve always loved coming here. I think it’s like my sixth time here and we finally got back to victory lane, so super special.”

The Kansas Lottery 150 was the last ARCA event of the season at an intermediate track. Because of that, Jesse Love will be back in the No. 20 for the rest of the season, thereby ending Heim’s part-time campaign. Heim was glad to end his ARCA season on a high note.

“We gave one away at Michigan last time, or I personally did. Just not having the restart we needed on the last couple of laps there so I knew going into this one that I wasn’t going to give this one away. I did everything I could to get through the gears good, do my job, and my team gave me a recipe for success for sure.”

Atop the No. 20 pit box, Shannon Rursch has guided Heim and Love to win a combined three races. The late race restarts created the opportunity for some drama on the final few laps, though.

“You always just want to finish it out,” Rursch said. “There’s always a chance when you have a restart at the end to screw up or something happens or a couple of guys stay out. I don’t really like that part of it; I’m glad we came out on top.

Everybody wants to have the driver and the car that’s that good so it actually makes my job easier. The only thing you can do is mess it up at the point, right. I’m just really thankful for the opportunity to come here and do this. Really happy with Toyota that it gives us everything we need to do it. Billy’s put together a great program; just thankful to be a part of it.”

On the last pit stop, Rursch called Heim down to pit road to take the last set of tires. All the lead laps cars followed suit, so the final two-lap shootout featured everybody on fresh tires.

“Oh, it was important. It was everything. It’s why we didn’t come down on lap 25. Even coming down there at lap 55, you’re sitting there thinking like, ‘Man, I’d like it to go green from here to the end.’ Thankfully, we had those tires left. Certainly don’t like to get beat with a set of stickers laying in the pits. It was never a question; we were coming no matter what. I’m glad it worked out.”

It's Heim Time in @kansasspeedway!@CoreyHeim_ holds off the field on the green-white-checkered to claim his ninth career ARCA victory!@MAVTV | @FloRacing pic.twitter.com/xxsMGRzvL4

“I think we were chasing the No. 20 all day,” Sanchez said post-race. “We just fell a little short. I think that was the best speed that we had at Kansas. I never really lost sight of him [Heim]. But yeah, we just didn’t have the speed. Proud of my Rev Racing, Max Siegel Inc. team, I want to thank Gainbridge and Team Chevy for all they do and we’ll go on to Bristol. Obviously, we extended our lead. I was going for the win no matter what but I guess for the points sake, it was a good day.

Sammy Smith finished third, nipping Dye at the finish line. Dye wound up fourth after fighting some issues throughout the race.

“I think we belonged there,” Dye said. “I think if it wasn’t for me hitting the wall and not having good restarts we at least could’ve had Sammy [Smith]. We had him at the line, I thought we were coming to the checkered [flag] at the restart, but they threw the white flag. All in all, a pretty good day. We’re racing Nick [Sanchez] for the points. We lost some, but three short tracks, that’s my wheelhouse so I’m looking to capitalize.

We’re going to need four points a race. Bristol [Motor Speedway] is one of my favorite tracks. I visited Toledo [Speedway] earlier this year, looks like a cool place. And Salem – they all are places I have circled so I’m looking forward to just getting as much as we can out of our GMS Racing Chevrolet. Just really proud to be a part of this organization. They give me racecars that are really fast every week; I just got to do what they can do to get in victory lane.”

Ryan Huff rounded out the top five with a fifth-place finish, his career-best ARCA result. Parker Chase finished in sixth place as the last driver to finish on the lead lap.

Christian Rose and Amber Balcaen finished seventh and eighth, respectively, both one lap down.

Of the top five in the championship standings, both Rajah Caruth and Greg Van Alst saw their days ended prematurely because of crashes, relegating them to DNFs. Caruth finished 12th and Van Alst finished 17th.

After being successfully released from the infield care center, Van Alst told MAVTV he was uncertain whether his No. 35 team would be able to repair the car in time to make it to the next ARCA event at Bristol Motor Speedway.

It’s a quick turnaround for ARCA as the series heads to Bristol. The Bush’s Beans 200 will take place on Thursday (Sept. 15) at 6:30 p.m. ET with TV coverage provided by FOX Sports 1.