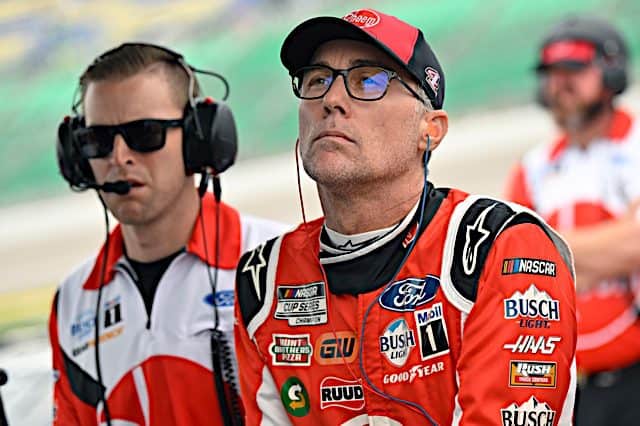 At this moment, it seems no one wants to win the 2022 NASCAR Cup Series championship.

After a disappointing opening Round of 16 race at Darlington Raceway, which saw drivers like Kyle Busch, Chase Elliott and Kevin Harvick all have early exits, many playoff contenders had more issues in the second race at Kansas Speedway on Sunday, Sept. 11.

Harvick finished dead last (36th) in the Hollywood Casino 400 after he smacked the wall on lap 33 after a battle between Bubba Wallace and Ross Chastain took the air off Harvick’s nose off of turn 4. It is Harvick’s third straight DNF (the first time in his career that has happened in 782 Cup starts) and he now faces a must-win scenario heading to the final race of the Round of 16 next week at Bristol Motor Speedway.

Kevin Harvick describes what happened during the crash that ended his day in Kansas and has a quick answer when I ask about his chances to win at Bristol and advance in the playoffs. pic.twitter.com/Aes7NO3Qqk

Tyler Reddick was one of the bigger heartbreaks of the day. He led early after starting on the pole and looked to be the car to beat until a right rear went down on lap 66, sending his No. 8 tail first into the wall off of turn 2. While Reddick is not in a must-win situation heading to Bristol, he also must have a good day if he wants to advance to the Round of 12.

"We've had fast cars. We blow tires and crash them."@TylerReddick will need to have a good day next weekend @BMSupdates if he wants to keep his playoff hopes alive.#NASCAR #HollywoodCasino400 pic.twitter.com/7TKqpDdfzP

Busch also had a wild day at Kansas, too. After restarting in the rear early on in the race for equipment interference (along with another playoff contender, Daniel Suarez), Busch then lost the car off of turn 4 on lap 138 and went spinning through the infield grass.

More trouble for Kyle Busch as he spins coming out of Turn 4. #NASCARPlayoffs // @USA_Network pic.twitter.com/AADkHaSoGN

Despite the spin, Busch managed to rebound after the heartbreaking engine failure while leading at Darlington to finish 26th. It certainly wasn’t his best result, but he avoided another DNF.

Chase Briscoe also got caught speeding on pit road, missed his pit stall at one point, and almost collided with Alex Bowman on pit road as well. Briscoe finished 13th when the checkered flag flew, but he could’ve finished higher if the pit road mistakes didn’t happen.

Among other playoff drivers, Denny Hamlin (finished second) and Austin Dillon (14th) also got tagged for equipment interference, while Ryan Blaney (ninth) had to pit a second time to fix a loose wheel.

Christopher Bell (third) and Bowman (fourth) took stage one and two wins, respectively. But for the second week in a row, a playoff driver was unable to capture the valuable five playoff points for winning the race.

Despite eight playoff drivers finishing with a top 10 at Kansas, Wallace dominated the last portion of the race and took home his second career win (technically, Wallace is a playoff driver in the owners’ championship). His win comes just one week after Erik Jones put the famed No. 43 back in victory lane at Darlington.

After Kansas, Christopher Bell is the only driver officially locked into the Round of 12. However, some drivers have the opportunity to do so at Bristol with stage points. Yet other playoff drivers need to perform well for a full 500 laps to advance to the second round of the playoffs.

In a round that has already seen a lot of action, it’s clear all the playoff drivers need to clean up their act if they want to have a shot at the championship when Phoenix Raceway rolls around in November.

That all seems feasible to achieve until one realizes that the 0.533-mile, chaotic short track Bristol is looming next Saturday, Sept. 17 at 7:30 p.m. ET on USA Network.

The Cup playoffs are about to get even crazier.