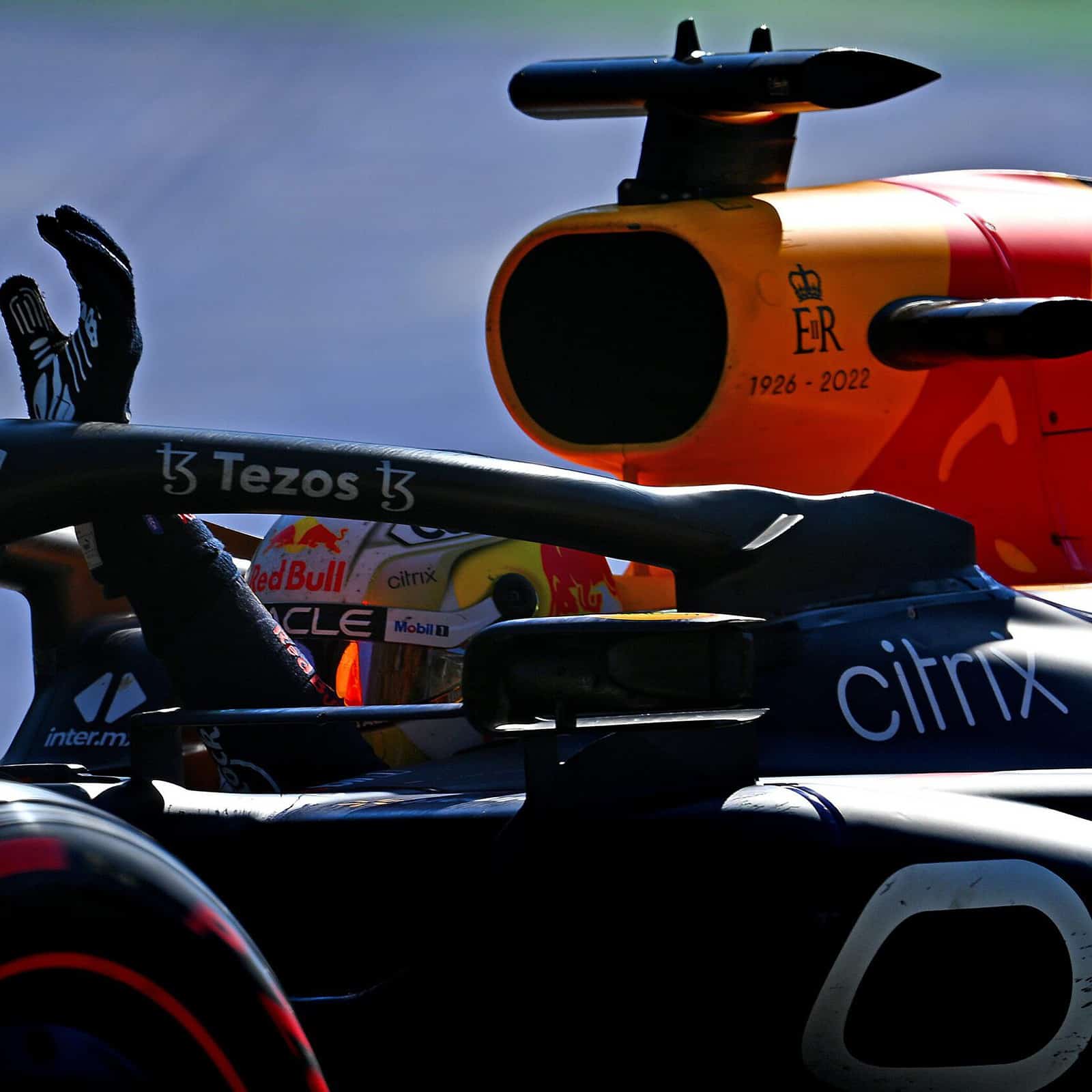 An ugly win is still a win. And when it’s your year, it’s your year. Max Verstappen grabbed his 11th Formula One victory of 2022 and the 31st of his career when he took the checkers behind a safety car at Sunday’s (Sept. 11) Italian Grand Prix. With six F1 races to go, Verstappen is all but assured of winning his second driver’s championship, as he holds a 116-point gap over second place Charles Leclerc (335-219).

With the win, Verstappen is now tied with Lewis Hamilton for the second-most in a Formula 1 season. The way this year has progressed, he is very likely to tie the all-time mark at 13 victories, standing a very good chance of breaking it and putting his 2022 statistics at a gaudy level that wonʻt be rivaled.

Leclerc, who started on pole and hoped to give Verstappen and Red Bull a run for their money, could not match pace with the championship frontrunner. Had the race returned to green for the final two laps, Leclerc still likely would have been caught in Verstappen’s exhaust and finished where he did in second place.

George Russell started strong off the line and Mercedes kept their wits about them to bring him home third on the day, his seventh podium of the year. Carlos Sainz overcame starting in the rear to score fourth, giving Ferrari vital points to hold onto second in the Constructorʻs championship over Mercedes (406–371).

Lewis Hamilton also came from the back and through a first-lap ding to wind up in fifth, benefitting after he smartly decided not to pit during the final safety car. Hamilton gained a position to pip Sergio Perez, who finished sixth.

Lando Norris started on the second row but bogged down at lights out and dropped to seventh on the opening lap. He basically held station throughout the GP and wound up in that seventh spot. Pierre Gasly, rumored to be heading to Alpine next year, put together a solid effort to end in eighth for what is AlphaTauri’s home race.

Nyck de Vries, a surprise entrant for Williams who gained the opportunity to race when appendicitis felled Alex Albon, took a car he’d barely ever driven, started eighth and grabbed ninth-place points in his first-ever F1 GP. Zhou Guanyu earned the final points-paying position of the race, his third top-10 finish of the year.

From lights out, the race became one where Ferrari and Red Bull would dominate the story. More specifically, the win would be decided between Charles Leclerc and Max Verstappen. Though Leclerc earned the pole and held serve at the start, fending off a challenge from George Russell, nothing about his Ferrari indicated he could pull away from the field. Verstappen, in contrast, blasted from seventh into third.

On lap 12, Sebastian Vettel bowed out of his final race in Italy. Leclerc came into the pits, put mediums on and slotted into third. Verstappen moved into the lead with Russell trailing. Sainz pulled in behind, with Ferrari then holding the third and fourth spots and with an undercut on Verstappen.

Whatever strategy Ferrari used was undone by the speed Verstappen showed, consistently besting his rivals by two-to four-tenths of a second. By the midpoint of the race, the outcome appeared to be written, with the big question being whether or not George Russell would get in the way of Leclerc earning second.

The mixed grid, with a host of drivers falling back because of replacement parts penalties, failed to deliver the excitement that may have been anticipated. Seeing Sainz and Hamilton drive from the back and into the top five highlighted how good those teams are and the gains the midfield needs to make.

On lap 32, Fernando Alonso quietly retired by pulling into the paddock with water pressure issues rather than continuing on and seeing the engine fully go. Alonso had been holding down seventh at the time and his disappointing result, along with teammate Esteban Ocon finishing out of the points, is a blow to Alpine’s aspirations for finishing fourth in Constructor’s points. They continue to hold the edge over McLaren (18) but it’s shrinking by the race.

On lap 47, Daniel Ricciardo parked in the midst of the Lesmo corners. The full course yellow came out a lap later and the debate regarding how to handle the conclusion ensued. Ricciardo’s McLaren, however, sat stuck in gear and could not be rolled behind the barriers. Instead, officials had to wait for a cherry-picker to come and remove the stricken papaya-colored vehicle. With five laps to go, most assumed the car would be pulled from the track and the race restarted.

The outcome did not follow the script. The disabled car came off with three laps left and the race director was left with too few laps to run things according to the rules, having lapped cars pass and setting the field correctly. That the safety car picked up George Russell rather than Verstappen also played into the failed attempt at a restart as the order needed to be reset behind it.

With Abu Dhabi still lingering as a bad memory of race mismanagement, the people who took over for F1 Race Director Michael Masi after said debacle called the race correctly, even if ending behind the safety car came as anticlimactic. Race Director Niels Wittich not only followed the rules as written but showed he is a stable voice in conducting the GPs.

The Abu Dhabi GP was a bizarre circumstance that will never be repeated, but each GP has its own flavor and can bring its own challenges. In this regard, Wittich passed his first test – even if Ferrari Team Principal Mattia Binotto wanted the race to return to green to give Leclerc a show at Verstappen. (The irony here is Verstappen would likely have cruised to the win anyway, as Leclerc was never able to match pace during the GP.)

Red Bull boss Christian Horner addressed the matter, saying, “We had the faster car and we would have liked to win the race on the track, not behind the Safety Car. We share the disappointment of all the fans, because it took away a grandstand finish.”

The Tifosi let it be known they were unhappy with the outcome of the Italian GP by booing Verstappen when he took his place on the podium. The vitriol directed at Verstappen seems to have more to do with how the closing laps were managed rather than his continued mastery of the sport.

As much as Niels Wittich got the call right, Mattia Binotto is correct. “Finishing behind a safety car is never great,” he explained, “Not for us, but F1 and the show. I think there was time for the FIA to act differently today.”

The show is the big issue in play. Verstappen would have likely won either way; the problem is fans were not given the chance to see that play out. The frustration seems to be everyone assumed the track should be clear with more alacrity but officials could not meet that expectation.

One further comment is that prior to Ricciardo parking his car to the side of the track, Verstappen was going to sail away with a nine-second win. Is that so much better?

F1 Silly Season should get all the more fascinating with questions surrounding Nicholas Latifi, Pierre Gasly, and NTT IndyCar Series driver Colton Herta. Nyck de Vries just put together a statement performance that should make his claim to a spot on the grid more likely. Questions now arise as to what spots are open versus what contracts are in place for whom.

Daniel Ricciardo’s firing from McLaren and Sebastian Vettel’s retirement set off plenty of fluctuations in the driver market. Fernando Alonso and Oscar Piastri kept the changes coming, but there is reason to believe a number of moves are still in the offing, with Williams, Alpine, and AlphaTauri all in the mix to alter the lineups. The coming weeks should be revelatory.

Nyck de Vries earned Driver of the Day and there is no reason to counter with a different name. Plugged in after Alex Albon could not race, de Vries did more than acquit himself well and instead gave a highlight reel performance that should easily make him a replacement for Latifi, if not a name for teams to fight for. As a F2 and Formula E champion (2019, 2020/2021), de Vries has shown he can win and, even at 27 years old, is worthy of the risk.

Max Verstappen was in full understatement mode after the race. “The pace was good on every tire and we were comfortably the quickest on the track,” he said. “You have to try and be as perfect as you can be and, on most occasions this season, we have been pretty good.”

Meanwhile, Ferrari Team Principal Mattia Binotto is well aware his team is a half-step slower. “Overall, finishing second and fourth is a good result,” he explained, “although there is naturally a sense of regret at not bringing home the win after starting from pole. However, today, Max (Verstappen) was simply quicker than us.”

Nyck de Vries, after running ninth, shot his shot to perspective F1 employers. “Driver of the Day makes me so happy,” he said. “I’m very pleased and thankful that I got given the opportunity and I grabbed it with both hands. It was a great day for the team and whilst grid penalties played in our favor, ultimately, we did a great race so I’m very happy for everyone in the team and for myself. Hopefully, I will get a shot next year.”

Note – Perez scored an additional point for setting the fastest lap of the race.