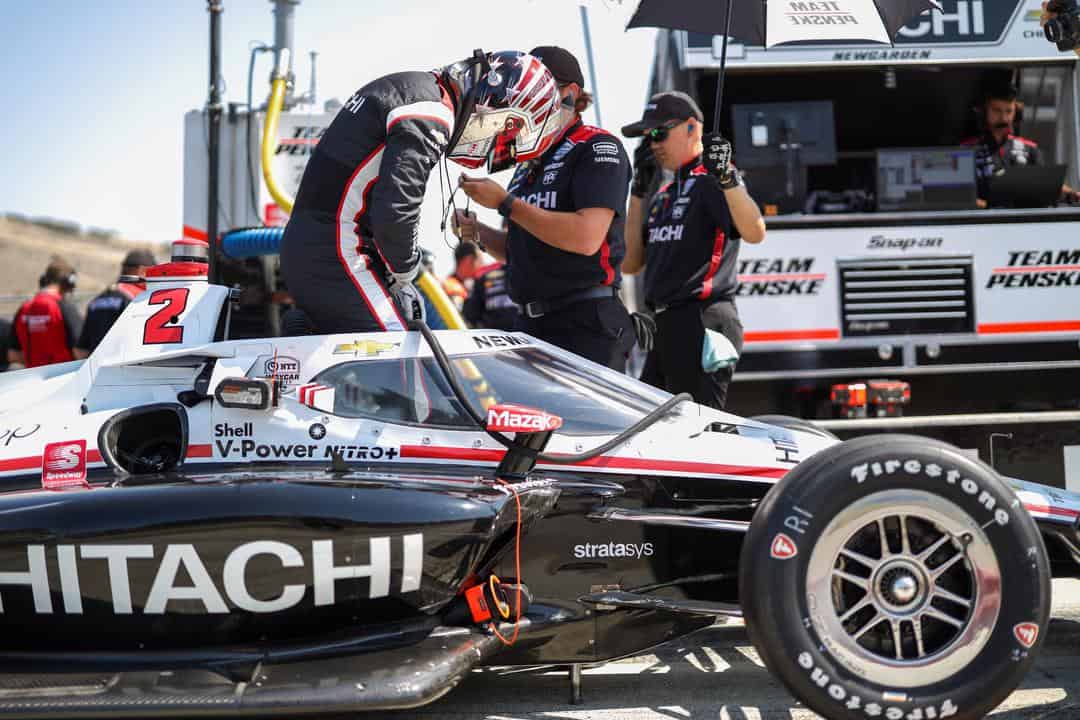 At the end of Sunday’s (Sept. 11) Firestone Grand Prix of Monterey in Laguna Seca, Will Power took home his second NTT IndyCar Series title by 16 points over Josef Newgarden.

While Power did everything in his power – I know, I’m sorry – to take home the title by winning the pole on Saturday, and then leading the first lap (exploits worth two bonus points), difficult circumstances for the other title contenders helped the No. 12 team’s campaign throughout the afternoon.

Power had four other rivals who entered the day with a shot at the Astor Cup: Josef Newgarden, Scott Dixon, Marcus Ericsson and Scott McLaughlin. However, everybody was not treated all the same by the legendary NorCal track.

Newgarden’s weekend appeared to be derailed quickly and dramatically at the start of Saturday’s qualifying session.

Approaching the Corkscrew, Newgarden made an overly ambitious entry, clipping the apex curb with the left side tires and spinning through the corner and into the gravel trap, left with no chance to rejoin the track. The resulting red flag meant Newgarden was ineligible to advance to the Firestone Fast 12 and the two-time champion would start Sunday’s race from 25th place.

Newgarden had climbed to 14th position by lap 11, eighth by lap 38, and then restarted in fifth after a stranded Callum Ilott triggered a full course caution on lap 39. Just after the race’s halfway point, the driver of the No. 2 Hitachi Chevrolet made his intentions clear, sending divebomb after divebomb into the Corkscrew to overtake Pato O’Ward, Felix Rosenqvist, and Power in the same corner over the course of only five laps.

From P25 to going after the race leader.@josefnewgarden gets around @12WillPower and is charging after @AlexPalou.

Newgarden opted to make one extra pit stop compared to the rest of the field as the race wound down, having held a fresh set of Firestone Primaries and Alternates for the sprint to the finish. The raw pace of this fresh rubber made staying in front of Power through the pit cycle look like child’s play and Newgarden firmly planted himself in second place, albeit far behind eventual winner Alex Palou.

On the day, Newgarden’s second-place finish left him 16 points short of Power for the title.

Dixon’s bid for a record-tying seventh title was, like that of Newgarden, put on its heels by a shocking elimination from round one of qualifying.

Starting in 13th, Dixon made little progress on the day, struggling to find balance and grip in his No. 9 Honda. Despite a recent series of runs from the midfield to the upper end of the pylon, Laguna Seca proved to have other plans for the New Zealander; traffic and issues with handling meant Dixon struggled to crack the top 10 throughout the day.

“We ultimately didn’t have the pace,” Dixon told Motorsport after the event. “It was a strange race in that we tried everything that we could, we tried to short-stop, we kinda kept coming out into traffic. The one run we got clean air, our pace was as good as the leaders. Just frustrating, we couldn’t bring what we needed today.”

Despite missing out on a record-tying seventh title in 2022, Dixon did manage to surpass Mario Andretti on the all-time wins list with his victory at Nashville in August. His career total of 53 now sits 14 behind A.J. Foyt for tops on the list.

McLaughlin entered the title-deciding finale on the outside looking in; 41 points behind Power, to be exact. Only a finish in the back quarter of the field for Power and a finish of fifth or worse for Newgarden and Dixon would offer McLaughlin a shot at the Astor Cup.

Consequently, the No. 3 camp entered the weekend understanding their role would likely be doing whatever they could to help bring home the title in the hands of Team Penske – be that through Power or Newgarden. This effort proved a tall order as McLaughlin had multiple skirmishes with Ericsson on track, including one forcing the other wide at the Andretti Hairpin and later on the exit of Rainey Curve.

McLaughlin ended the day in sixth place, well behind his Penske teammates Power and Newgarden, to collect a fourth-place points result for his sophomore IndyCar campaign. It was still a spirited September effort after winning at Portland the previous weekend kept him on the fringes of title contention.

Whatever happened through qualifying and 95 laps around Laguna Seca, Ericsson’s No. 8 Huski Chocolate Honda ended the day the worst for wear among title contenders. Ericsson, like his teammate Dixon, struggled to find a proper dose of pace and consistency throughout the day. It’s a speed deficit which came as a surprise after Chip Ganassi Racing tested at Laguna Seca in August.

“It was a tough race, we fought hard out there and gave everything, but just not good enough,” Ericsson told NBC Sports after finishing a disappointing ninth.

Despite a less-than-desirable end to the season for the Swede, he leaves 2022 with his first Indianapolis 500 victory and a sixth place finish in the standings. It’s definitely a solid foundation to build from as we head toward 2023.