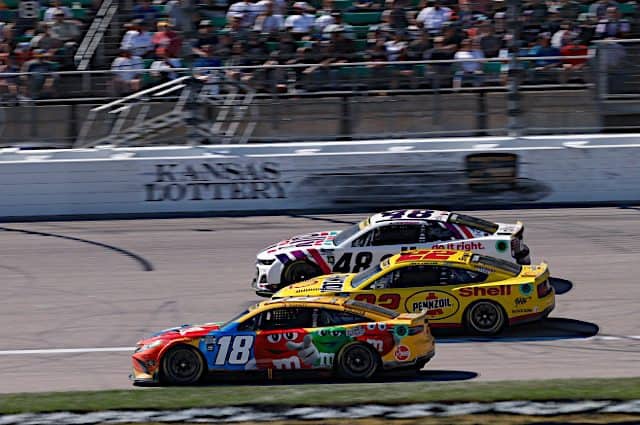 So far, the 2022 NASCAR Cup Series playoffs have been a bit wacky. I don’t recall a time in which playoff drivers failed to win the first two races (Bubba Wallace’s win did lock the No. 45 in the owners’ Round of 12, but that’s the owner’s playoffs). Kansas saw more shenaniganry and interesting things to look at.

Entering Sunday’s race, there were a couple of big stories. First, you had the fallout from Darlington. Kevin Harvick was an angry man after his car went up in flames late in the race, as seen in Frontstretch‘s video below:

In order to hopefully decrease the potential of fires, NASCAR issued a technical bulletin that made a number of rule changes. These changes included the introduction of a stainless steel piece near the exhaust to replace composite material and a piece to prevent rubber from getting to the exhaust.

These changes were shown to viewers using a fairly substantial computer graphic that gave an excellent idea of just what will be going on. Given the location of all of these new pieces (some of which that the teams might be able to make themselves instead of buying bespoke from a vendor), you wouldn’t notice any of it during a broadcast, but it is still very important to know that NASCAR is actually doing something to stop this ridiculousness.

Harvick was on Countdown to Green, discussing the situation. Since his interview rants in Darlington (both on USA and with the general media, linked above), he’s spent a fair amount of time in communication with NASCAR. Going forward, it’s going to be important for NASCAR to be transparent about these kinds of issues with the car. It appears that Harvick is satisfied that they’ve at least done something on this issue. There were no issues with random fires during Sunday’s race. Problem is, Harvick indicated that the fires were a known issue as much as a full year ago or more.

"Let's solve some problems."@KevinHarvick addressed the changes #NASCAR has recently made in the interest of driver safety. pic.twitter.com/BEPt666DvI

If what Harvick says is true, then NASCAR screwed this up badly. They knew about it, but didn’t do anything. They needed to have a fix for the fires a long time ago. Harvick shouldn’t have to light fires under the butt cheeks of NASCAR officials to get something like this done. The thoughts coming out of pre-race was that if NASCAR knew all about the fires last year, was last week’s fix truly a year in the making? Were they trying out a bunch of different things with an eye for introducing it for 2023 and Harvick forced their hand? Or, did Harvick effectively force their hand?

The changes this past week were just the first steps in fixing some of the issues with the Next Gen car. Next up is rigidity issues that allow these cars to give a little bit, cutting down on impacts to the drivers. As Dale Jarrett noted, that is not something that will happen overnight. My hope is that there will be some significant changes to the car in the offseason that will help out that issue. Unfortunately, we’re more or less stuck with what we currently have for the rest of 2022.

Speaking of Harvick, his race ended quickly after he clouted the wall exiting turn 4. The situation seemed ripe for the booth to blame Ross Chastain for it since he was racing with Wallace. However, they took a more realistic, conciliatory tone. Basically, this was a racing incident, or a “racing deal.” Doesn’t make Harvick any happier with his situation.

Obviously, Sunday’s Hollywood Casino 400 was a playoff race. There was plenty of coverage given to those playoff drivers. There were two Through the Field segments during the race, and one of those was dedicated to playoff drivers only.

One thing you really didn’t see all that much was points as they run. Believe me, I’m fine with that. It can get in the way of covering the rest of the race. That said, it will be back in force this weekend in Bristol.

There were a couple of pylon changes during the broadcasts last weekend that I didn’t particularly like. One was the reorganization of the starting lineup graphic to move those that have to go to the rear to the back. That’s not a good thing if you’re the kind of person that participates in regular fantasy or daily fantasy. It also screws with things. You’re confused as to whether you screwed up or the broadcast got you.

Also, the broadcast was intentionally cutting out part of the field when they did the full field rundowns. Remember that everyone has fans. They deserve to know where their favorite driver is running.

Later in the race, NBC Sports chose to keep their cameras trained on Wallace for much of the last 25 laps of the race. While yes, Wallace winning is a bit of a big deal (not as much as last fall at Talladega), there were other things going on. There was still action going on that didn’t involve Wallace. Make use of the split-screen if you absolutely have to take this approach.

Last week, NASCAR announced that streaming in-car cameras will be available for every Cup Series race from here on in for free at NASCAR.com via NASCAR Drive. In the article, it mentions that there is a standard mount on the dash of every Next Gen car that facilitates this camera.

For the 32 teams that didn’t have the regular cameras, they had the dash camera in play. This is a fixed camera that is pointed forward out of the front windshield. As of this writing, none of the streaming cameras are currently on YouTube. However, the general view that you see is similar to what you saw in 2007 when HD in-car cameras had just been introduced. They were generally bulky units that didn’t pan at the time. As a result, you got a shot like this one from Greg Biffle’s car in the Orbitz 300 at Daytona:

Viewers also have access to telemetry from each car.  However, that telemetry is delayed by something like eight seconds. Because of that, it’s quite weird to look at.

The idea of having these cameras available is an overall positive. Every driver has fans, no matter what some people might think. Making the cameras available will make it easier for viewers to follow their favorite driver. Not putting it behind a paywall is just that much better.

That said, there are problems, but what problems are encountered may vary based on your internet connection. In my case, the sound cut out at one point, which required me to leave NASCAR Drive and go back in to get it back. The feed would also cut out and/or slow down at times.

It could be viewed as a work in progress at the moment. There are definite upsides here, but it appears that there is more work that needs to be done.

Sunday wasn’t necessarily the race where it came into play, but the first time that came to mind when the cameras were announced was whether or not NBC Sports (or FOX Sports next year) would be able to make use of these cameras on the broadcasts. There is no definitive answer to that question right now, but we’re going to find out for you. All we can say for sure is that it didn’t happen Sunday.

Post-race coverage was decent. The race ended a little late, which likely cut into the interviews, but viewers still got a half-dozen for their pleasure, along with post-race analysis. I don’t believe that NBC Sports noted that Christopher Bell had locked into the Round of 12 on the broadcast. Found that out hours after the race.

Overall, Countdown to Green might have been the best part of Sunday’s coverage from Kansas. NBC Sports brought viewers an honest segment about the ongoing issues with the Next Gen car and showed how NASCAR has gone about trying to fix the issues in the best way.

The race broadcast was fairly average. Non-playoff drivers putting themselves in the mix is really helping things this year. It’s so much better when they aren’t a bunch of patsies. The current situation has allowed for a much wider reach than in previous years for playoff coverage. Hopefully, that keeps up.

That’s all for this week. Bristol is coming up, which means an early weekend. Thursday is a doubleheader with the NASCAR Camping World Truck Series and ARCA Menards Series (in a combo race with ARCA Menards Series East). Friday is the last regular season race for the NASCAR Xfinity Series, while the NASCAR Cup Series races 500 laps Saturday night. Should be interesting. You can find the TV schedule here.

With Lebanon Valley’s season now complete, it’ll be easier to cover everything. For next week’s edition of Couch Potato Tuesday, we will cover the Cup and Xfinity races from Bristol.  For the Annex, I’ll have some more thoughts about Kansas.

like that NBC regularly flips their running order graphic to inclall the cars. However, they tend to change so quickly it’s impossible to get through the list before it goto the next 10 cars. Please, slow it down. It’s the only way fans have to see a car is driving up through the field.

“Overall, Countdown to Green might have been the best part of Sunday’s coverage from Kansas. NBC Sports brought viewers an honest segment about the ongoing issues with the Next Gen car and showed how NASCAR has gone about trying to fix the issues in the best way.”

This is a major difference compared to FOX, who avoid anything critical of NASCAR like it’s the bubonic plague and whose graphics are like something out of 2002. There is no honesty in the FOX broadcasts, just relentless ass kissing of NASCAR.