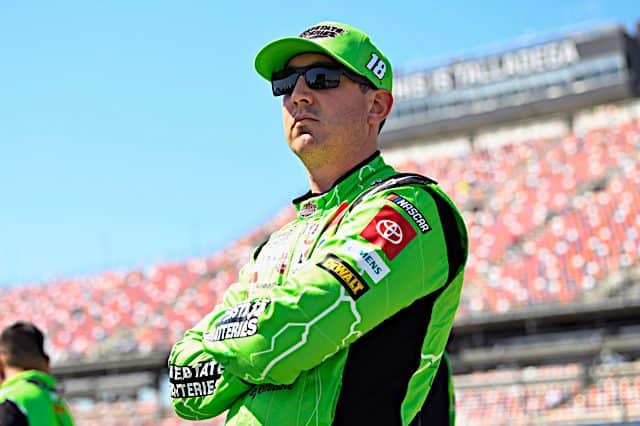 The 37-year-old will switch from the No. 18 Joe Gibbs Racing Toyota he has driven since 2008 to the No. 8 Chevrolet, a team entry currently fielded by RCR and driven by Tyler Reddick.

“RCR has an impressive history in NASCAR and I’m honored that Richard is putting his trust in me to come in and continue to build on that legacy,” Busch said in a release. “Growing up in a family of passionate racers myself, I feel like the culture that the Childress family has built within their organization will be an ideal fit for me. As I begin the next chapter of my career, I’m looking forward to driving for RCR and working with everyone there to add more wins and championships to both of our resumes.”

According to the release, Reddick remains under contract with RCR for 2023 and will compete for the team in some capacity. Team owner Richard Childress stated the team plans on acquiring a third charter for Reddick but has not specified from what team.

“The addition of Kyle Busch to the Richard Childress Racing lineup is significant, not only for our organization, but for the sport as a whole,” Childress said. “Kyle is a proven contender at the highest levels of the sport, and I believe that his experience and dedication to motorsports will elevate our race program across the board. I’ve always admired Kyle’s driving style and his ability to win and race for championships ever since he entered the sport. Who wouldn’t want a proven NASCAR Cup Series champion driving their car?”

The announcement comes after months of speculation regarding where the two-time Cup champion would go for his future after contract negotiations stalled with JGR.

The status of Busch’s NASCAR Camping World Truck Series team, Kyle Busch Motorsports, is not currently known. Busch has said he has nothing to announce as of yet but does plan on switching the team’s manufacturer from Toyota to Chevrolet.

After what has been a rough first couple of playoff weeks, Busch sits 13th in the postseason Cup standings only two points below the cut line with one more race at Bristol Motor Speedway left before the first-round elimination.

A 3rd charter for KB next year. Then in 2024 Ty Dillon can waste away a quality cup seat once Reddick leaves

I think Austin Hill or Sheldon Creed will be the third car in 2024.

Some are saying Rc will lease a charter for one year.

Kyle will increase the performance of RCR. Who knows the driver of the third charter after next year. Speculation is great, but these are business decisions.

we’ll see how it plays out. hopefully rcr will be competititve. bowtie’s gains is toyota’s loss. wonder how reddick feels? at least kyle b has, hopefully, grown out of the brashness he had in his younger years. it will be interesting to see how well kyle tolerates austin.

this is probably best opportunity for rcr to win another championship.

I’m guessing Kyle will make regular guest appearances on Austin’s reality television show. So they will get along OK. LOL

So… if Kurt doesn’t come back, that may change everything as far as Reddick and the #45 are concerned.

That’s the most likely outcome. Otherwise it will be a lame duck year for Reddick. He will be given hand-me-down cars and have a rag-tag team of extras (unless Childress is serious about starting a third team).

How’s Toyota’s pipeline of young good drivers look now with KBM running Chevy trucks. How did bubba’s cars become so fast the last 8 races or so !

Does the word “vinyl” bring back memories?

The natural progression of a driver?

I can’t help but wonder how Childress was able to put together sponsors to get Kyle, where Gibbs was not…

My guess is he hasn’t or we’d have already heard something.

Maybe it came down to how much money the sponsors would put up? I wonder how much of a pay cut he took?

Childress mentioned during the press conference that he has sponsors lined up. Could be blowing smoke, or maybe not.
One thought was maybe sponsors not as “family friendly” (read: CBD, Hemp, etc,) that may not have been approvable by Gibbs are ok with Childress?