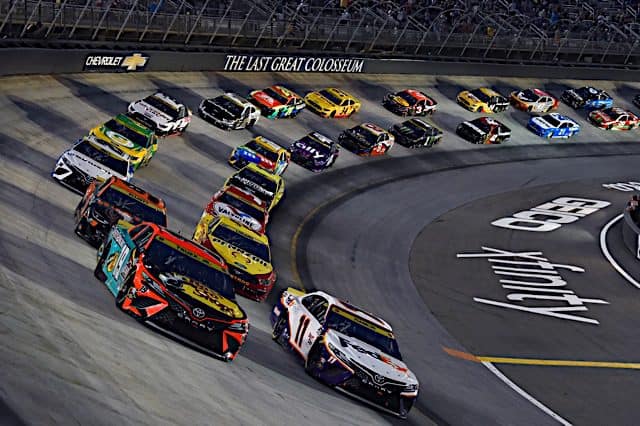 Bristol Motor Speedway’s night race has long been one of the most anticipated events of the NASCAR season. The track known as Thunder Valley is no stranger to making or breaking championship dreams. But in 2022, Bristol hosts the final race in the round of 16 for the third time. With nearly half the playoff field vulnerable to elimination, the stakes have rarely been higher heading into the night race.

In the first place, none of the playoff drivers have won through two postseason races. Darlington Raceway’s Southern 500 went to Erik Jones, his first points-paying win since the 2019 Southern 500. One week later, Bubba Wallace captured the second victory of his career with a win at Kansas Speedway. As a result, the only driver locked into the next round of the playoffs is Christopher Bell, due to a 58-point advantage over the cut line. Several other drivers, including William Byron, Denny Hamlin, Joey Logano, Ryan Blaney and Alex Bowman all have at least 30 points over the cutoff and are in good shape to advance.

The real battle is going to be among everyone from 10th place in points on back. All of those drivers are either below the cut line or ahead by no more than six points. Kevin Harvick’s situation is the most dire. He stands last on the playoff grid at 35 below the cut line. It is not a mathematical must-win situation, but it is difficult to picture Harvick advancing without a win at Thunder Valley.

The good news for Harvick and the No. 4 team is that they have been in this position before. In 2015, Harvick’s postseason got off to a rough start with finishes of 42nd and 21st in the first two races. Facing elimination, Harvick struck back at the competition with an overwhelming win in the third race, then held at Dover International Speedway. Just how dominant was the No. 4 that day? Harvick started 15th, blasted into the lead by lap 24, and proceeded to lead 355 of the 400 laps on his way to victory. The clutch performance kept Harvick in the game all the way to the final round of the playoffs.

One year earlier, another last-ditch victory was crucial to Harvick winning the championship. Throughout 2014, his first season with Stewart-Haas Racing, Harvick was often lightning fast but was also plagued by crashes and mechanical failures. A 33rd-place finish to begin the round of eight looked like it would be a fatal blow to Harvick’s title hopes. However, he was able to score a win at Phoenix Raceway two weeks later and punch his ticket to the championship round. Harvick, of course, won that race too.

Perhaps a lot of time has passed since the 2014 and 2015 seasons, and maybe the performance of the No. 4 team has been more uneven in recent years, but Harvick still shows flashes of his old self. Don’t forget how, with four races to go in the regular season this year, Harvick was around 100 points outside the playoff picture until winning the next two races. He is still extremely capable of pulling off clutch performances. Do not expect him to go down without a fight.

Likewise, Kyle Busch is going to be one to watch at Bristol, despite his recent struggles. Busch’s name has been all over the news in the last few days amid reports that he will drive for Richard Childress Racing in 2023. It’s been chaotic for Busch off the track and a rough ride on the track. At Darlington, Busch was leading under caution with 23 laps to go when his engine blew, forcing him out of the race. Things did not go any better at Kansas, where Busch battled an ill-handling car and spun through the infield before limping to a 26th-place finish. Busch may only be two points below the cut line, but the recent performance of the No. 18 team does not inspire confidence that Busch will avoid elimination.

However, Busch is one of the few who can make a trip to Thunder Valley work to his advantage. He’s won eight times there before, averaging a victory every four starts. And, unlike Harvick, Busch doesn’t even need a win. A top 10 should get the job done for the No. 18, and Busch has done that in over half his visits to Bristol. If a breakup between Busch and Joe Gibbs Racing really is on the horizon, perhaps Busch can crank out one more vintage performance at Bristol for old time’s sake.

The other five drivers below or near the cut line will be fighting for their playoff lives this weekend. In fact, most of them will be doing so in relatively unfamiliar territory. Austin Cindric, currently on the bubble by two points, has never run a Cup Series race on Bristol’s concrete surface. Chase Briscoe, nine points below the cut line, has only run one. Yet Briscoe does have a win and four top fives in six Xfinity starts at Bristol. Cindric’s Xfinity Series record at Bristol includes three top fives in seven starts, the last of which ended with him and AJ Allmendinger sliding across the finish line in a thrilling battle for the win. Briscoe and Cindric may lack experience, but they know their way around Thunder Valley.

In fact, some of the more experienced drivers near the cut line could be in more trouble. Austin Dillon will enter Saturday night’s race three points below the cutoff, and he only has three top 10s at Bristol in 15 starts. Daniel Suarez’s Bristol record includes only two top 10s in nine starts. At six points above the cut line, another middling performance could easily get him eliminated.

Then there’s Tyler Reddick, who had a rocket ship at Kansas before blowing a tire and crashing out while leading. Like Cindric, he is only two points above the cut line. Like Briscoe, he’s scored an Xfinity Series win at Thunder Valley. With finishes of 36th, fourth and 12th in his three Cup Series starts at Bristol, Reddick will be the true wild card in this weekend’s race.

With such a tight points situation, several drivers’ championship hopes are going to hinge on Bristol. The real question is what will be the deciding factor in setting the field for the round of 12. Will the experience of Harvick and Busch prevail? Can someone like Briscoe or Cindric pull off an upset in their biggest playoff test yet? Or, in a season where 18 different drivers have visited victory lane in 28 races, can somebody new conquer Thunder Valley? Only one thing is for sure — in one way or another, the NASCAR world is in for a shocker at Bristol.