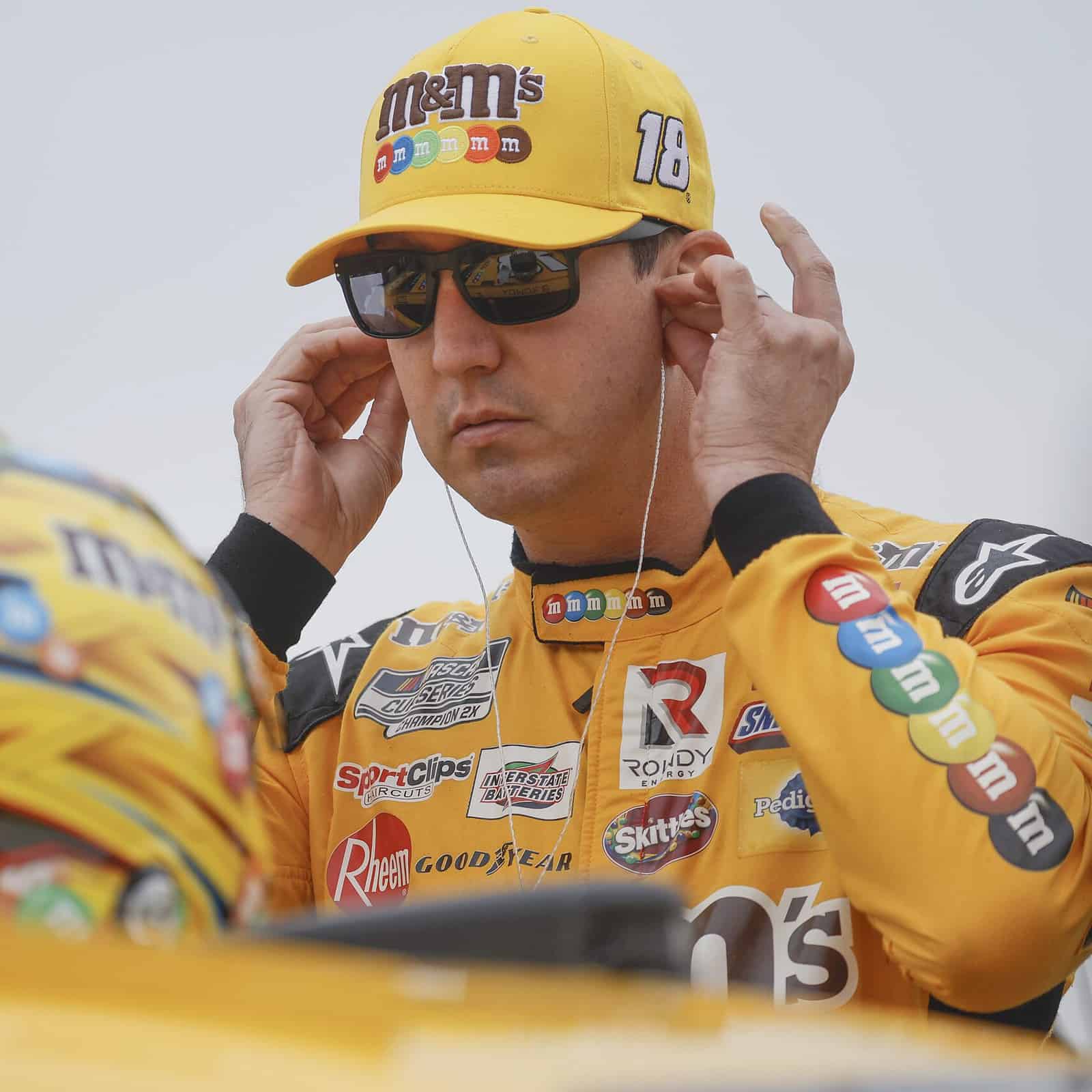 It’s the NASCAR news of the year.

Kyle Busch will drive the No. 8 Chevrolet for Richard Childress Racing for the 2023 NASCAR Cup Series season and beyond. Busch is now partnered with Richard Childress, a man he’s had a well-documented beef with, and he’s paired with Chevrolet after having a tight partnership with Toyota for the last decade-and-a-half.

Busch is a two-time Cup champion and would have been a good bet to add more championship trophies to his mantle had he stayed at Joe Gibbs Racing. But will he win a championship with RCR? Joy Tomlinson and Luken Glover discuss this topic.

No, Kyle Busch will not win a championship with RCR.

Let’s pump the brakes on this kind of thinking. First, Busch is no spring chicken; he’s 37 years old and has been mostly full-time in Cup since 2005. I mean, yes, he’s won 60 races and earned two titles. But it doesn’t appear that he’s a title contender now, at least the last few years.

This year his lone win (so far) came at the Bristol Motor Speedway dirt track after Chase Briscoe got into Tyler Reddick, spinning them both and allowing Busch to slip on by on the last corner. Not exactly one where he showed a lot of strength on his way to victory.

Also, when he does win, it’s few and far between. His last victory before Bristol was at Pocono Raceway last June. Busch took the checkered flag at Kansas Speedway that May, too — his first win since fall 2020 at Texas Motor Speedway. That Texas triumph, which came on a Wednesday, was nearly a year after he won the 2019 championship at Homestead-Miami Speedway.

He even struggled in the Camping World Truck Series, though I’ll use that term loosely. Busch earned his only victory at Sonoma Raceway in his final start of the 2022 season. In the previous nine years, he earned two or more victories each year, running from four to 11 races a season.

Of course, these stats are still better than what RCR’s experienced over the last 20 years. Its last Cup title came with Dale Earnhardt in 1994, though it came close in 2014 with Ryan Newman. But in the latter’s case, Newman was second and he didn’t win a race at all that year.

Since 2017, the organization’s best rank in the driver’s standings was 11th in both 2017 and 2020 with Austin Dillon. But even Dillon only got one victory here and there. In fact, Tyler Reddick’s two triumphs marked the first time an RCR car won twice in one season since Kevin Harvick in 2013.

And how do we know that Busch will bring RCR back to being a championship contender? I mean, yes, Childress said he sees Earnhardt’s desire to win within Busch, but that doesn’t mean it will happen.

It reminds me of Brad Keselowski’s situation a bit, going from Team Penske to RFK Racing, only RCR performs better than RFK. Still, it’s not like Hendrick Motorsports or even Stewart-Haas Racing (maybe) where he would have better than average equipment on most ovals.

Until Busch proves me wrong, it looks like his championship-winning days are done. – Joy Tomlinson

Third Time Is a Charm

Is RCR a downgrade from Joe Gibbs Racing? Pre-2022, yes. As far as consistency and overall speed go, it is once again an affirmative. But we are in the Next Gen-era now, and RCR is beginning to look like its old self again in some ways.

So why will this work? Let’s begin with Busch himself. Rowdy has certainly not been the dominant driver over the past three seasons that we’ve grown accustomed to. Since winning his second title in 2019, he has four wins. Kyle Larson, Martin Truex Jr., and Alex Bowman all surpassed or matched that total in 2021 alone. We have also seen him make more mistakes than usual this past year.

The large majority of that can be attributed to either distractions or a stale relationship with Joe Gibbs Racing. Given Busch’s personality matched with changing times in the sport, it isn’t much of a surprise. Relationships reach their expiration date eventually. Just look at the Jimmie Johnson/Chad Knaus pairing.

As Busch stated in his press conference to announce the new deal, he views the RCR deal as a “reset.” And a potentially refreshed and reenergized Busch equals a very dangerous driver. There is a reason he has 224 wins and three championships across NASCAR. His first year with JGR landed him eight wins. That was a much younger, immature and inconsistent Busch. Now, he knows how to close races and contend week after week.

With the youth movement officially looking poised to take over, Busch’s age of 37 may be pointed to for concern. The peak age for NASCAR drivers is in the range of 38-40 years old. Drivers who won at the age of 37 or above in the past decade include Jimmie Johnson (twice), Kevin Harvick (38), and Truex (37). We’re also seeing Harvick, Truex, and Denny Hamlin being able to compete for wins beyond the age of 40. As talented as Busch is, he could easily have quite a few quality years left in him.

Next comes his new team in RCR. It has not won a championship since 1994 with Earnhardt, nor even gotten a sniff at being a title threat since Newman in 2014. That has changed in 2022, as Reddick has won two races and is a potential championship dark horse. But Reddick has had more opportunities, yet is still learning how to close a race. Busch knows how to get it done and hold on for victories or come through in the clutch.

As Frontstretch‘s own Tom Bowles pointed out in this week’s “Did You Notice,” Busch’s signing fills the hole that Reddick will leave when he packs for 23XI Racing and immediately makes the team relevant. Here is the win/win for both parties: the No. 8 is undergoing very little change. Aside from the driver, obviously, the crew is staying intact. That includes crew chief Randall Burnett, who has formed a strong chemistry at RCR. Putting a winning driver into a car that is being built and managed by a winning team is a strong bond.

RCR has not had a veteran, title-contending driver since Harvick. Yes, he never won a title there, but he did come close. He finished third in points in three of his final four seasons with RCR, winning 12 races in that span. The last driver before Harvick who was a title contender? Just some seven-time champion who Richard Childress compared Busch to. Rowdy is hungry to win and get back to his dominant ways. At 76, Childress may view this as his last hurrah. Both will do whatever it takes to make it work.

That leaves the manufacturer, Chevrolet. After a couple of years looking up to Toyota and Ford, Chevrolet has been the one to beat the last couple of seasons. They won the championship with Chase Elliott in 2020. They absolutely dominated en route to a title with Larson a year ago. And despite the level playing field we’ve seen more of in 2022, they lead all manufacturers with 16 wins. Ford and Toyota have 11 combined.

Childress’s longstanding relationship with Chevrolet and Busch’s past ties with the manufacturer has the potential to yield fruit. Factor in the GM brand’s new technical center and there is even more reason for optimism.

As it goes with all new deals, it may work magic or it could fall from grace. But a hungry, proven driver, a long-time owner, excited partners, and a team back on the rise gives me enough reason to believe that Busch may get to hold his third Bill France Cup after all. – Luken Glover

I have to come down on the side that says Kyle CAN win a Championship there. He may not get there, but he WILL be in the hunt come next September. I’ll go a little farther and say he will win Daytona in February.

Well, with the current crapshoot format, if he can make the final 4, he has as good a shot as any of the other three drivers. However, if you look at the teams that have been winning championships, they win a lot of races and lead a lot of laps.You also have to wonder if the pseudo-parity that the new car has created will continue or if, once everyone is familiar with it, the gap between the mega-teams and the rest of the field will start to widen.

I believe kyle can win a championship. He is fired up about coming to a new team and I am sure he will have all the energy back to win races. Good luck to both./

Who is Joy Tomlinson? From California, a degree in Liberal Studies. She is perfect for the new Woke NASCAR fans who don’t know sh*t ! Oh don’t forget, she covered iracing!