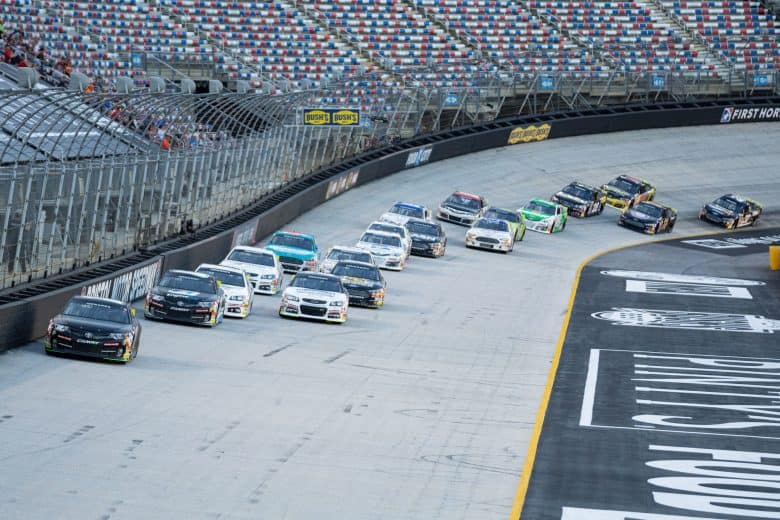 For the fourth time this ARCA Menards Series season, there will be 30-plus competitors. Yes, the Bush’s Beans 200 has 31 drivers competing at Bristol Motor Speedway on Thursday (Sept. 15). Who will shine under the lights at the 0.533-mile short track?

This event is a combination race for the main series and the ARCA Menards Series East. In addition, it is the East season finale.

Smith will also continue his part-time campaign in the NASCAR Xfinity Series at Bristol behind the wheel of the No. 18 Joe Gibbs Racing Toyota. The Xfinity race will take place on Friday, so Smith will gain 200 valuable laps at Bristol on Thursday in the ARCA event. It will be a busy two days for Smith.

Going for the ARCA East and Sioux Chief Showdown Championships tomorrow night with @KBMteam and another Xfinity start with @JoeGibbsRacing on Friday ⚔️ pic.twitter.com/D7A68rEpwq

Smith finished second in the ARCA event at Bristol last year behind his teammate Ty Gibbs. Although Gibbs is not competing, Smith’s Xfinity teammate Brandon Jones will return to the No. 81 Toyota. Jones is making his fifth ARCA start of the season and 30th of his career.

Jones already boasts three victories in his four ARCA starts in 2022; can he finish his part-time slate with a fourth trophy?

“It’s kind of surprising how much running ARCA for a few races this season has helped me in the Xfinity car,” Jones said in a press release. “It gives me a big advantage to get on track before getting in the Xfinity car … The guys have been working hard in the shop on both the ARCA and Xfinity cars so hopefully we can get to Victory Lane in the No. 81 Menards/Toyota Camry on Thursday night…”

In his racing career at Bristol, Jones has 20 starts and scored four top fives and 10 top 10s with a best finish of third place in the 2020 Xfinity spring event.

In fact, no driver entered at Bristol has won at the track before in any series, so there are plenty of hungry ARCA drivers seeking the victory.

Gray has made five combined starts in his career, including four in ARCA competition. Gray finished third in the 2021 ARCA event there last year, also a combo race for the main and East series. Gray has accumulated five ARCA-sanctioned wins in 2022, including three in the main series. Currently second in the East standings, Gray will have a new sponsor onboard his No. 17 Ford.

The main series has three races left in its season, including Bristol. Realistically, the title is down to two drivers – points leader Nick Sanchez and Daniel Dye.

Sanchez has finished 11th and fourth, respectively, in his two ARCA starts at Bristol. The 21-year-old will also attempt to compete in double duty as he’s piloting the No. 48 Big Machine Racing Chevrolet in the Xfinity race.

Let's get it! 👊@Nicksanchez080 will make his Big Machine Racing debut this week at @BMSupdates for the #FoodCity300, Friday, Sept. 16, at 7:30p ET@bigmchnvodka | @SpikedCoolers | @chevrolet https://t.co/25fRCvEjG8

“I’m looking forward to Bristol, historically Rev Racing has been good there,” Sanchez said in a team release. “We have a very competitive banking package and I want to win badly, especially in Bristol.”

Dye trails by 12 points, so he needs to gain four points more than Sanchez per race for the rest of the season to usurp the points lead en route to the title. Dye started third in the 2021 ARCA event at Bristol, but he slid back to a disappointing 12th place finish. Still, in his ARCA short track career, Dye has one victory, four top fives, six top 10s and he has also led 390 laps.

“I just have to keep going,” Caruth said in a team release. “I’m ready to get back out there and give it my all.”

Caruth started seventh and finished sixth in the 2021 ARCA Bristol race. He’s hopeful of a better performance in his second trip there, adding, “I’m excited to go back to Bristol and improve from my performance last year.”

Venturini Motorsports has four drivers ready to give the team its fifth victory of 2022. Jesse Love returns to finish out the ARCA season in the No. 20 and Parker Chase, Toni Breidinger and Conner Jones flank him in the Nos. 15, 25 and 55, respectively.

Thursday will be a busy day for Leland Honeyman. The Young’s Motorsports driver is making his first ARCA start at Bristol, and then he will attempt to make his NASCAR Camping World Truck Series debut for the team.

I am super excited to announce that I’m making my @NASCAR_Trucks Debut at @BMSupdates this Thursday with @youngsmtrsports. I can’t thank LH Waterfront Construction and everyone enough for this great opportunity! pic.twitter.com/VMBCPx00sW

“I am really excited to get back into the seat knowing that I am going to be racing in the NASCAR Camping World Truck Series along with the ARCA Menards Series on the same night,” Honeyman said in a team release. “Bristol is such an amazing track. I have been preparing myself by spending a lot of time on the simulator this week and I hope that will pay off for both races on Thursday night.

“I am definitely ready to close off the season with a win knowing it will be my last ARCA Menards Series East race for this season. It’s not going to be easy but it’s Bristol and crazy things can happen. I’d love to take a good run from the ARCA race and apply it towards a successful top-20 finish in the Truck Series.”

Honeyman is third in the East standings, 14 points behind Gray for second place, but guaranteed at least a third-place points finish. The 17-year-old will wrap up his debut East campaign, and he already has three top fives, five top 10s and one pole in the six East races.

“I cannot believe the year will be complete on Thursday night,” Honeyman said.” Our year has been going well and I’m looking forward to making the best of Thursday night and ending my rookie season on a high note.

“Being able to grab a second-place finish in my debut season was a good way to start and I hope to be able to contend for a win this week and if not this year, for sure in 2023.”

The ARCA competitors will hit the track for a 50-minute practice session before qualifying. The green flag for the Bush’s Beans 200 will then fly at 6:30 p.m. ET with TV coverage provided by FOX Sports 1.