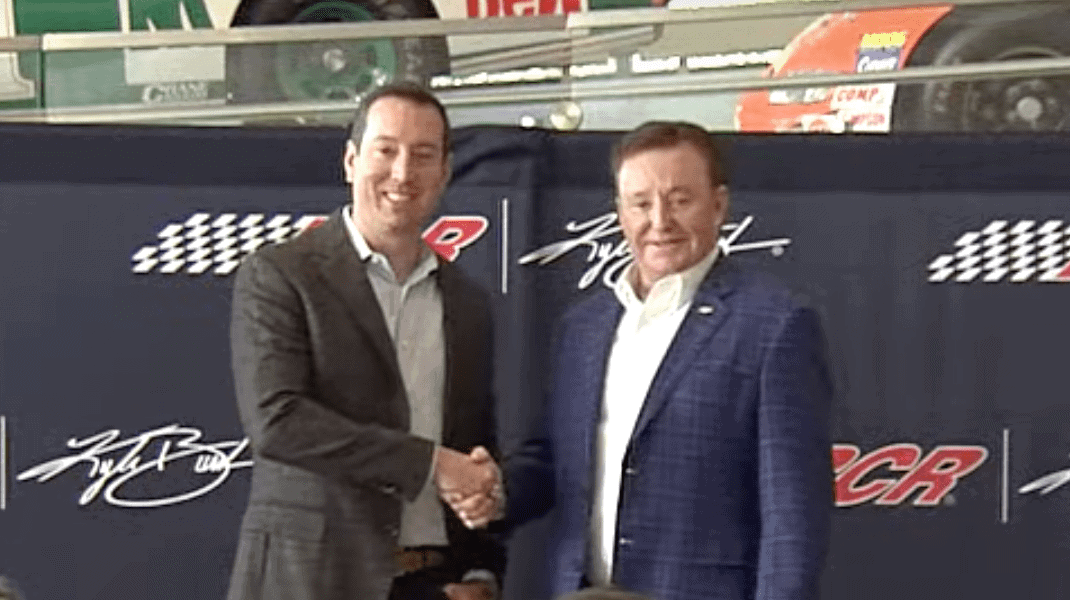 “Looking forward to getting out there in 2008 and try to win some races and contend for some championships and ultimately, like JD (Gibbs) said, hopefully be here for the rest of my career.” – Kyle Busch at Joe Gibbs Racing announcement, Aug. 14, 2007

A long, hot summer of speculation and questions of “will they or won’t they” came to an unsurprising end Tuesday (Sept. 13) at the NASCAR Hall of Fame.

Kyle Busch and Joe Gibbs Racing will be no more.

Less than a week after it was first reported, Busch made his future official:

He’ll be “taking [his] talents to Welcome, North Carolina” to drive the No. 8 car for Richard Childress Racing starting in 2023.

The announcement came with the in-jokes you’d expect, given the history between Busch and Childress.

“Well you know, Kyle, the other week when we signed our contract, there was something I forgot to give you, was your signing bonus,” Childress said, presenting his new driver with a small, green box.

“Will you hold my watch?”

Childress then playfully gave Busch’s son, Brexton, an envelope with an “option” to race for RCR in the future.

@brextonbusch showed me the "contract" that Richard Childress handed him today at the @KyleBusch news conference !!! Covering for @SiriusXMNASCAR pic.twitter.com/aeyxR4sspI

As the only active NASCAR Cup Series driver with multiple titles and more than 200 NASCAR wins to his name, it seems unthinkable that Busch would race anywhere but JGR.

But if we’ve learned anything from the last few years — Brad Keselowski moving to RFK Racing and Michael Jordan and Pitbull becoming team owners — it’s to expect the unexpected and that nothing lasts forever.

So here we are.

“The last few months have been nothing but stressful, I’ll admit, and it’s been 15 years since I’ve had to make a decision quite like this,” Busch said. “But 15 years ago, it was just me. You know, I didn’t have a family. I didn’t have a wife and a son and a daughter and a race team around me that I had to worry about. It was just what I needed to do.

“So this process took a lot longer than I expected it to, sure it did. […] This is one of the most important decisions of my life. And I definitely couldn’t rush through it. I had to find a place where I knew I can go win races immediately.”

So Busch chose RCR, one of the longest-running NASCAR organizations, dating back to 1969. A team that hasn’t won a Cup title since Dale Earnhardt did in 1994 and a team that, until this summer, hadn’t won multiple races in a season since 2017.

Why was this the right move for Busch?

He “needed a place where I felt like I could hit reset, and I could be welcomed just as I am,” Busch said. “This change will allow for a clean slate, and that’s big for me and my family, new team and new teammate, new teammates [and], most importantly, a new boss who accepts where I’ve been and yet can help me get to where I want to be.”

It was Childress’ grandson, Austin Dillon, who first raised the possibility of Busch joining the team to him.

“That’d be a dream,” Childress recalled saying before asking him to setup a meeting with Busch.

“We had a lot of work to do to make it happen,” Childress said.

Austin Dillon on why he called Kyle Busch about driving the No. 8 car, how Busch almost hired him to drive an Xfinity car and then Busch on the reaction to getting that call from Dillon. pic.twitter.com/TmTxVfVZXo

For Busch, it was “a no-brainer” when he first sat down with Childress to discuss the opportunity.

“It was easy,” Busch said. “It was a clear-cut choice, as I mentioned before that, that this was a place that you could go win races and win championships right out of the gate.”

Busch broadly explained what the discussion process had been like with teams over the last few months.

“We went into every single race team and told them the exact same thing, myself and Mike Verlander,” Busch said. “We told everybody like, ‘Hey, we’d like to be between X and Y. And if you add in a Z, then let’s go, let’s see what that looks like.’ It wasn’t a money play. That had nothing to do with it.”

What was the “Z” that made RCR the most appealing?

“What was the extra perks there? There isn’t any,” Busch said. “The opportunity to just be able to go race with a team that has shown potential this year already and has won races this year already, is a proven team for me to be able to jump right into and go continue that and carry it to the next level.”

Kyle Busch says he has it in his contract with RCR that he can run the Indy 500 for a Chevrolet-supported team.

Why would RCR sign Busch? Childress asked, “Why not?”

The owner cited Busch’s stats as being self-explanatory. But then he made a comparison that some may nod at while making others gag.

“When I was up there with Kyle, and we first started talking and we talked about championships, and we talked about winning races, I looked at him in his eye, and I seen [sic] that look in Dale Earnhardt Sr.’s eye,” Childress said. “He’s hungry. […]

“I’ve seen that look before, and watching Kyle, I’ve watched his talent for many years since he started in the Busch Series [now NASCAR Xfinity Series] and […] the car control, the way he drives a car and take-no-prisoners attitude. That’s the Dale Earnhardt style that I was accustomed to racing with, and I think Kyle has that modern-day style of racing that Dale Earnhardt had in his time.”

2022 is Daniel McFadin’s ninth year covering NASCAR, with six years spent at NBC Sports. This is his second year writing columns for Frontstretch. His columns won third place in the National Motorsports Press Association awards for 2021. His work can also be found at SpeedSport.com. You can hear more from him on his podcast, Dropping the Hammer.

Was RCR the only one to bite? If my memory was recent; Joey and Dave’s son while getting contracts this season, done. Roger said he was not looking at anyone at all outside his business. Including Kyle. Said he was thrilled with all three of his drivers, didn’t want anybody else. Speaks volumes. I say that Kyle construing the narrative of how he came to RCR is PR BS. IMO. Money and mutual outcomes make strange bedfellows, but don’t insult people.

Should be interesting to what the self-centered attention seeking drama queen Sammy Busch will do and will she fit in the orbit of the equally narcissistic Whitney, Austin’s wife, mother of Ace! On THEIR pissing grounds. LOL. This is GOLD! IMO.

I’m pretty sure Baby Busch had to leave his ego at the door during the “talks” with different teams. I hope Sam isn’t too disappointed at the final number.

Wow, Richard Childress comparing Kyle Busch with Dale Earnhardt. I wonder how that will fly with the classic Intimidator fans.

Those that aren’t already biased against him (all three of them) will see it as the truth.

wait…I think we are all missing the point…Samantha Busch and Whitney Dillon will be on the *same* NASCAR team. Seriously…I mean the optics alone…

One thing Kyle has going for him is Richard is old school. Richard expects the bumber to be used. (Dillon twice at Daytona) and of course it was a trade mark of Dale Sr., so Kyle now it’s your turn.

I’d like to see Kyle racing for championships with Childress. He still wants to win every dang race he’s in. And best of all, he’s getting a new crew chief. I know he hasn’t forgotten how to win. He gets headlines because he’s a heck of a wheelman, and wins races, unlike some who are shoved down our throats.