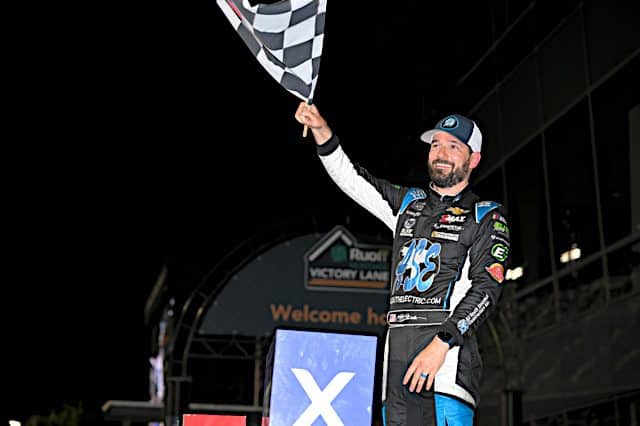 The most shocking victory of the NASCAR Xfinity Series season came at Daytona International Speedway in the Wawa 250 on Friday, Aug. 26, and now it’s finish means something once again.

With all but five cars involved in incidents and half the field in the garage for the final restart, Jeremy Clements held off Timmy Hill and a damaged AJ Allmendinger to score his second Xfinity Series win in improbable fashion after the caution waved on the 118th and final lap. The checkered flag waved in the early hours of Saturday, Aug. 27, which marked five years to the day of Clements’ first Xfinity Series win at Road America in 2017.

Upon winning, it appeared that Clements had punched his ticket to the playoffs for the third time in his career and for the second year in a row. However, the celebration was short-lived. Clements’ No. 51 car was taken to the NASCAR R&D Center for further inspection, and it was announced days later that the team was assessed an L2 penalty on Aug. 30 for a problem with the intake manifold of the car.

While Clements was allowed to keep the victory, he was stripped of his playoff eligibility while NASCAR dropped the hammer with a $60,000 fine for crew chief Mark Setzer, -10 playoff points and a 75-point deduction in both the driver and owner’s championships.

With the ramifications of the penalty for Jeremy Clements Racing, the team quickly launched an appeal. The process took more than two weeks, but it was announced on Sept. 13 that the L2 penalty was rescinded; Clements was eligible for the playoffs once again.

And with Clements’ reintroduction to the playoff grid comes a complicated situation for the drivers on the cut line, as last Saturday’s (Sept. 10) rain-shortened race at Kansas Speedway was the penultimate race of the Xfinity Series regular season. After Kansas, the cut line was Daniel Hemric (+48), Landon Cassill (+32) and Ryan Sieg (+13) to the good with Sheldon Creed (-13) right behind them.

Of course, the possibility of Clements’ penalty being overturned was always an outside chance. But for the last two weeks, Sieg and Creed operated under the assumption that the battle for the final spot would come down to them.

The elephant is the room is the battle between Creed, Noah Gragson and Kyle Larson for the win at Darlington Raceway two weekends ago, the first race after Clements was penalized. Creed entered the race 43 points below Sieg for the final playoff spot, and he was looking at a guaranteed playoff berth if he was able to keep Gragson and Larson at bay for three more laps. Unfortunately for Creed, Larson went side-by-side with him on the final lap into turn 1 and the pair made contact. The contact ultimately led to Gragson passing both of them in the final set of corners for his fourth win of the season.

Creed’s first Xfinity win slipped out of his fingertips on the final lap, but he was all smiles with Larson after the race with a runner-up finish. And, while he entered 43 points behind Sieg, he left Darlington with just a 16-point deficit. Even though he missed out on the win, Creed was left with a feasible chance of pointing his way in with two races to go.

But with Clements in, Creed is now 32 points below the cut line with one race remaining. Unless everyone else runs into trouble, he is practically in a must-win situation for the regular season finale at Bristol Motor Speedway. And if Creed misses the postseason, the finish with Larson that cost him a spot will likely raise questions about Cup drivers racing for wins late in the regular season.

For everyone else, the penalty reversal is a revelation that puts that much more pressure on the cut line. Hemric went from a nearly guaranteed playoff spot to one in jeopardy if disaster strikes. Cassill went from solidly in the playoffs to a risk of elimination. Sieg went from having a sizable cushion to a sizable deficit. And, of course, Creed went from having a chance to point his way in to needing a win.

See also
No Matter the Team, Ryan Preece Is an 'Old School' Type of Racer

And don’t count out Creed from scoring his first career win in the eleventh hour. In last year’s Camping World Truck Series race at Bristol, Creed led 189 of the first 195 laps before a flat tire on a restart with five laps to go took away what would’ve been the most dominant win of his career.

Creed is a two-time winner at Darlington Raceway in the Truck Series and responded with his most complete Xfinity Series performance at the track two weeks ago. With everything on the line, Richard Childress Racing and Creed know what they have to do Friday night.

Further compounding the sudden shift of the cut line is the fact that this is the tightest battle for the final playoff spot since the postseason format began for the series. Starting in 2016, the final points margin between the final spot and the first one out was 30, 25, 91, 95, 48 and 63 points, respectively. The 30-point margin in 2016 was before the implementation of stage points, and the 25-point margin in 2017 occurred when Clements spoiled the playoff party for the first time with a win.

From 2018-21, there were no surprise winners as the top 12 in points made the playoffs. And with no surprises, the race to make the playoffs in the regular season was largely nonexistent.