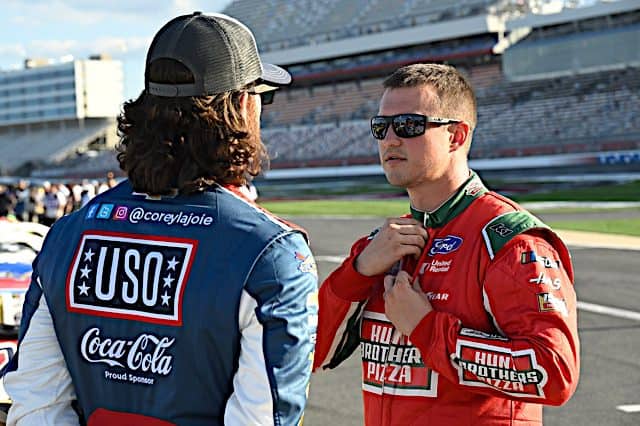 Throughout his NASCAR career, Ryan Preece has been one of the ultimate journeymen.

It has been a rollercoaster journey for the 31-year-old, beginning with a couple starts with Tommy Baldwin Jr. in the NASCAR Xfinity Series at his home track of New Hampshire Motor Speedway in 2013. Shortly after, he was signed on by small team owner Johnny Davis and JD Motorsports for his first full-time NASCAR Xfinity Series ride. He was subsequently discovered by Joe Gibbs Racing and netted two wins with the team in NASCAR’s second-tier series after two part-time years.

By this time, almost everyone in the racing world knew the Northeasterner’s name.

Preece was finally promoted to the NASCAR Cup Series by JTG Daugherty Racing in 2019, where he earned nine top 10s and two top fives over the course of three seasons. He now sits at reserve driver status for Stewart-Haas Racing, on standby to fill in for any of the Cup Series team’s four cars while maintaining his driving status by racing for various teams across NASCAR’s three series.

Add a Rick Ware Racing start here, a BJ McLeod Motorsports start there and cap it off with some competitive runs with David Gilliland Racing, where he’s earned two wins in two seasons, and you have a recipe for making one of the most valuable journeymen in the sport today … and he does it with almost no sponsorship backing.

Preece also maintains a connection to the NASCAR Whelen Modified Tour, where he earned one championship and four runner-up points finishes over the course of seven full-time seasons from 2008-15.

While he may not be racing full time in his modified anymore, he still competes in the background and even earned three wins in the series in 2021, continuing a part of his racing path that’s been with him since his journey began.

But how exactly did that long journey begin? And with opportunities closing for the young driver heading into the sunset of the 2022 season, where will it take him next in the sport’s top level?

Frontstretch caught up with him at Daytona International Speedway on Aug. 27 to find out more.

Dalton Hopkins, Frontstretch: You’ve been a bit of a journeyman this year. How has that been, racing part time in the NASCAR Camping World Truck Series, part time in the Xfinity Series and a couple Cup Series starts as well?

Ryan Preece: Oh yeah. Different from previous seasons, I mean, as far as my national career has gone. You get a few opportunities with manufacturer-based teams, then you get some that aren’t. And ultimately, from where I’m from and been contending for wins your entire racing career, it’s tough to go to those environments again and really take a step back. So this was a good opportunity for myself running the truck and being up front, contending for wins. I feel like we probably should have a few more and things just didn’t quite go our way, or just things out of your control. But at the same time, we’ve done what we needed to do. We won one. Wish it was a few more, but still it’s keeping your name there.

Hopkins: Back now to Berlin, Conn., in that Northeast part of the United States. That’s where you got your start. Tell me about how you grew up, got into that [NASCAR Whelen Modified Tour] and how did you get into racing?

Preece: I mean, probably like most people. Racing’s been on both sides, my mother and my father’s, so I grew up about five minutes from a track in Connecticut [in] Meriden, Silver City [Quarter Midgets Club], which is a quarter midget track. Started racing there. Really, the reason I started racing modifieds is just because it was a lot easier to go to. I mean, it wasn’t easy to go to Indianapolis or run pavement midgets. As I got older, it was just a lot more accessible to be at that part of the country and just started racing modifieds, traveling to North Carolina or Pennsylvania when I was about 14-15 years old, and made my way out of the modified tour when I was 16. I had a lot of poles, a lot of wins, a championship and an owners’ championship. I’ve just been really successful up there.

Hopkins: So tell me about how that start kind of came to be, and then you really became a staple of that series ever since. Do you just feel like that’s where you have belonged?

Preece: I mean, that’s just where I grew up. It’s not that I didn’t love racing super late models or midgets or stuff like that. It’s not as easy as getting a ride like it is in other sports where you earn yourself a spot. I mean you go wherever it’s easiest to be in the country to race. In 2007, my family — we had a modified and we chose to try and race the Whelen Modified Tour. That’s how that happened.

That just wasn’t in the cards. I’m sure I could have, but financially, it didn’t. It wasn’t where my family was or could do, so I became a staple in the modifieds because that’s where I’m from. I’m from the Northeast. I raced weekly at Stafford Motor Speedway, Thompson [Speedway], Riverhead [Raceway]. I raced three to four nights a week up there, because it was tracks that I could race at an hour and a half or three hours from my home and go race the next night.

Hopkins: It was a very short-track-focused career in the modified series, but then you started getting noticed by Joe Gibbs Racing. Tell me about the differences, and how you got your bearings.

Preece: It just comes down to right things happen on the right time, right? You got to have fast racecars and then you have to do your job, and, you know, not speed on pit road. Execute. All that stuff came together, so as far as that it was a great opportunity with Joe Gibbs Racing. We won a few races and contended for wins and that was great, but you know it was the same thing racing with [David Gilliland Racing] and those guys. We’ve had a few wins, and we’ve contended for wins, which is great, and it’s been a lot of fun.

My national series career has been an uphill battle the entire time. Tommy Baldwin was actually the first one who gave me an opportunity to race a Xfinity car in 2013. It was one race in 2013, two races in 2014, some Cup starts, just to get through what they had for an approval process in 2015. 2016, I raced for an underfunded team that didn’t have the access to everything that JGR or any of these other teams had. So statistically, when you look up who I am and when I race, it might not look all great, but if you eliminate the years where you aren’t with a manufactured team, it’s pretty good. So it’s just trying to rebuild and show people when I get in a racecar outside of the national series with things that I feel like we can go win races with, that’s usually what we do.

Hopkins: About that call in 2013 when you got that offer to drive in the Xfinity car with Tommy Baldwin — did that just kind of happen suddenly, or was that a relationship that you were building along the way?

Preece: The first time I met Tommy, he was at Loudon testing a Cup car. I think Dave Blaney was there, and that was the first time. That was about a month before the race, and he’s from modifieds and he wanted to help put me through that process. That’s how that whole thing really started, and I have a great relationship with Tommy still to this day. I still go out to dinner with him here and there. So he’s really the one who started the whole thing of trying to get to this point. Before that it was try and win races in the Northeast and wait for a phone call that might never come.

Hopkins: Then you were getting noticed and went to JGR, and then you get noticed by JTG and they offer you the full-time ride. How did that deal come to be?

Preece: Well, somebody in my position, I don’t have funding or I didn’t have funding to go get opportunities. So, really, it was a good opportunity for somebody like myself to make a living in NASCAR and work with Tad and Jody Geschickter. It was a great three years of experience. But yeah, it was racing at NASCAR’s top level. But at the same time, my goals are to compete for wins week in and week out, and I feel like somebody in where I am right now, that’s what I have to do.

Hopkins: Later on, JTG had to make the decision to go back to the one-car team. Unfortunately, they were not able to keep you along the way, but now you’ve landed here with SHR as a reserve driver […] There’s been a lot of silly season news this weekend. One of which was Aric Almirola announcing that he’s going to come back instead of retiring. Was there a chance that you were going to be promoted into SHR?

Preece: I’ve never really had that conversation, right? If anybody would ask it or assume it. But I think, right now, my role is my role. There’s a lot of things that go behind the scenes to try and get to the top level in NASCAR, and one of those things is having sponsors. So, I have great relationships with the people that continue to help me, and we’re just going to keep trying to build those.

Hopkins: Was there a thought that ever popped in your head like, ‘You know, maybe this is an opportunity here that could come out for me’?

Preece: I mean at the end of the day, I’m a racer. I go out. It doesn’t matter if it’s up in the Northeast, here, or in a truck or in a Xfinity car. My job is when I get hired to do something, it’s go out and win. That’s the reason I’m there.

To answer your question, I think things change constantly in the sport. I don’t think it’s as easy as saying, ‘You know, so and so could be in whatever car at any time’. Things change. I mean things can change tomorrow.

Preece: I mean this is definitely a company that I want to be a part of. I enjoy everything about it. People like Tony [Stewart] and Kevin [Harvick] and the racers that you’re surrounded by. They’re racers. They have the same thought process. They feel about the things the way I feel about them. It’s racing. There are so many things that that make things happen, right? So, hopefully, one day things come together. I can get that opportunity and try to race for wins. That’s ideally what I want to do.

Hopkins: Have there been any talks about the future? Your schedule is fulfilled, but are there any more plans, maybe a surprise entry later on in the playoffs, and what about 2023?

Preece: Your guess is as good as mine.