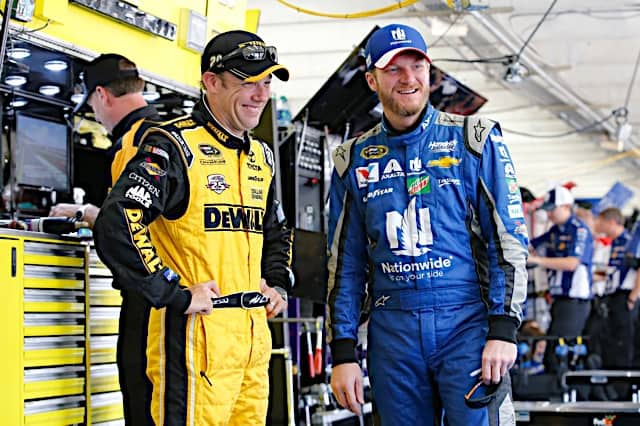 Kyle Busch leaving Joe Gibbs Racing at the end of 2022 sounded unheard of a few months, but here we are in September with Busch taking his talents to Richard Childress Racing. With Busch moving to the No. 8 for 2023, his 15-year tenure at JGR that netted 56 wins and two championships will come to a close.

Before Busch’s official announcement on Sept. 13, the summer was dominated by questions about his future plans, especially when leaving JGR became a realistic possibility as time went on. With Busch back in a Bowtie for the first time since 2007, we take a look at the most heavily anticipated free agent signings in NASCAR history:

David Pearson to the Wood Brothers (1972)

David Pearson won back-to-back championships with Holman-Moody in 1968 and 1969, but when the team proposed a pay cut to Pearson after losing manufacturer support in 1971, Pearson decided to leave.

He signed with the Wood Brothers for 1972, and for the next seven years, Pearson ran roughly two-thirds of the season for the team. It turned into one of the most iconic partnerships in NASCAR history, as 43 of Pearson’s 105 wins came in the famed No. 21, a total that included a 1973 season where he won 11 of his 18 starts.

After a narrow championship defeat in 1979 and numerous engine failures in 1980, Darrell Waltrip’s relationship with DiGard Racing turned ugly as he tried to buy out his contract to sign with Junior Johnson & Associates after three-time champion Cale Yarborough elected to race part-time for 1981.

The two sides ultimately agreed to part ways after 1980, and the switch to Johnson immediately paid dividends for Waltrip. He had back-to-back championship seasons in 1981 and 1982 before collecting a third title in 1985. From 1981 to 1986, Waltrip won 43 races — more than half of his career total.

However, Waltrip’s tenure in the No. 11 car ended after just six seasons, as Waltrip moved to Hendrick in 1987 after Johnson refused to match the salary that Hendrick had offered him.

At the conclusion of the 1981 season, Bobby Allison was 43 years old and a 65-time winner with zero championships. The window was closing for Allison to win the big one, and he signed with DiGard in 1982 after the team almost won it all in 1979.

Allison had driven for countless teams throughout his career, and DiGard was the sixth team for Allison since the start of the Modern Era in 1972. DiGard finally proved to be the winning combination, however, as Allison captured his lone Cup Series championship in 1983 at 45 after another near miss in 1982.

Altogether, Allison collected 16 wins at DiGard in his first three seasons. His DiGard tenure famously came to an end, however, after Greg Sacks won the 1985 Firecracker 400 with a DiGard test car. Allison, who was winless that season, quit driving for the team on the spot.

Dale Earnhardt took the NASCAR world by storm, as he defeated Cale Yarborough for the championship in just his second full-time season in 1980. Team owner Rod Osterlund sold the team in the middle of 1981, however, and Earnhardt bounced around for a year before competing with Bud Moore Engineering in 1982 and 1983. Earnhardt wasn’t able to reach the heights of 1980 with Moore, and he struggled with reliability despite showing consistent winning speed.

Earnhardt parted ways with Moore after 1983, and he found a home with RCR for 1984; it marked his second tenure with RCR after part-time starts with the team in 1981 after Osterlund’s team was sold to J.D. Stacy.

And as they say, the rest was history.

Petty Enterprises was Richard Petty’s home, but not for the final two wins of his career in 1984.

Heading into 1983, Petty had 195 career wins and the NASCAR world was counting down to win No. 200. In the fall race at Charlotte Motor Speedway, Petty scored his 198th win and his third of the season. However, there was a fallout from the blatant infractions found in post-race inspection. The victory stood, but the No. 43 was docked points and received a hefty fine.

Tim Richmond had established himself as a NASCAR icon in the early 1980’s, and he won four races in his first five seasons. His big break came in 1986, when he was hired by Hendrick Motorsports and paired with crew chief Harry Hyde. At the time, Hendrick was a two-year-old team with only three wins under its belt — certainly not the dominant team it would eventually become.

That didn’t matter for Richmond, as he finished third in points and won seven wins in the 1986 season, a number that included six wins in a 10-race span during the summer.

Sadly, Richmond’s time at star was short lived. Richmond was diagnosed with AIDS in December 1986 (a diagnosis that was kept secret until his death) and he only ran eight more races (with two wins) in 1987 before his health deteriorated. Richmond passed away in 1989 at the age of 34.

Bill Elliott’s No. 9 car for Melling Racing was an iconic staple of NASCAR in the 1980s. While the team was funded by Harry Melling, the Elliott family had control over much of the day-to-day operations, as Bill’s older brother Ernie served as his crew chief and engine builder. Those operations came to an end in 1991, however, as Elliott signed with Junior Johnson for 1992 after winning a championship and 34 races with Melling.

The pairing was electric right off the bat; after a crash in the Daytona 500, Elliott won four races in a row and found himself with a substantial championship lead as the season came to a close. However, late crashes and mechanical failures brought Davey Allison and Alan Kulwicki within striking distance, and Elliott lost the title to Kulwicki by 10 points despite winning the final race.

The pairing was never the same after the championship defeat, as Johnson fired several crew members after the loss. Elliott only picked up one more win in the 1994 Southern 500 before leaving the team at the end of season. Johnson sold his team to Brett Bodine at the end of 1995. Elliott would not win again until 2001.

It’s not very often that a driver leaves a team one year removed from winning a championship, but that’s exactly what happened with Kurt Busch for 2006.

Even with winning it all at Roush Racing in 2004, the relationship between Busch and the team had rapidly deteriorated. Busch pursued other opportunities, and he was announced as the successor to the departing Rusty Wallace for Team Penske’s No. 2 car in 2006.

Busch won 14 races and a championship in his final four seasons at Roush, but his Penske tenure wasn’t able to compare. It was still a success, however, as Busch won 10 races for The Captain in six seasons. But just like his tenure at Roush, Busch’s relationship with Penske was in complete disrepair by 2011. The pair parted ways at the end of the year.

As NASCAR’s most popular driver during its commercial peak, the departure of Dale Earnhardt Jr. from Dale Earnhardt Inc. after 2007 was a culture shock. The summer of 2007 was a heavily publicized sweepstakes to sign Earnhardt, and he ultimately struck a deal with Hendrick for 2008.

Earnhardt’s tenure at Hendrick began with a disappointing start, as he scored just two wins in his first six seasons in the No. 88 car. However, Earnhardt had a resurgence in 2014 and 2015 and won seven races — including the 2014 Daytona 500 — in the two-year span.

Earnhardt had to replace someone at Hendrick, however, and Kyle Busch was the odd man out. Busch had four wins in his first three years at Hendrick, and he set the then-record for youngest winner at just over 20 years old in 2005. However, maturity was a concern in his Hendrick tenure, and he was stuck in the shadow of two all-time great drivers in Jeff Gordon and Jimmie Johnson.

Busch ultimately signed to drive JGR’s No. 18 car for 2008; what followed was one of the most successful tenures in the 21st-century that will come to an end this November.

Tony Stewart won 33 races and two championships with JGR from 1999 to 2008, and he was one of NASCAR’s biggest faces during its 2000s boom. However, the end of his JGR tenure came when the team switched from Chevrolet to Toyota for 2008.

After a frustrating 2008 season with just one win, Stewart was let out of the final year of his contract to compete for Stewart-Haas Racing, a rebrand of Hass CNC Racing that he would join as co-owner. There were concerns about how SHR would perform in its debut season, but those concerns were quickly washed away when Stewart won four races in 2009. All in all, Stewart won 15 races and the 2011 championship at SHR between 2009 and 2013, and he scored his final win at Sonoma Raceway in 2016.

Kevin Harvick was one of Stewart’s closest friends, and he established himself as a frequent winner in the Cup Series at RCR. However, he was only a serious title threat in 2006 and 2010. Harvick had won 23 races in 13 seasons with RCR, but the pairing had worn out its welcome by the end of 2012. That paved the way for Harvick to join SHR in 2014, and he responded with a championship in his first season with the team.

The pairing with Harvick and crew chief Rodney Childers was so strong that Harvick led more laps in his first two seasons at SHR than he did in his entire 13-year RCR tenure. Harvick is still at the team today, and in nine seasons, the pairing has netted a championship and 37 wins; a number that continues to grow.

Matt Kenseth had driven for Roush Fenway for the first 13 seasons of his career, and he scored 24 wins and the 2003 championship in the process. But after negotiations with Roush stalled, Kenseth surprisingly announced that he would move to JGR in 2013.

Kenseth’s debut 2013 season with JGR proved to be his best, as he won seven races and battled Johnson down to the final race before finishing runner-up in the championship. Kenseth added 15 wins to his resume in five seasons at JGR, but he was released at the conclusion of 2017. Kenseth then returned home to Roush for a part-time schedule in 2018 and replaced Kyle Larson at Chip Ganassi Racing in 2020 before calling it a career.

After Kenseth left, Roush struggled to find speed in 2013 and 2014. Carl Edwards won four races in the two years after Kenseth left Roush, but with the team continuing to backslide, Edwards followed his former teammate to a fourth JGR car in 2015.

Edwards won five races in his first two seasons, and he made the Championship 4 in 2016. But after a heartbreaking defeat in the final race, Edwards shockingly announced his retirement from NASCAR before the beginning of the 2017 season; he hasn’t been back since.

Kyle Larson was set to be a hot commodity at the end of 2020 as a free agent, and he was coming off a Chip Ganassi Racing tenure that saw him win six races but have numerous others slip through the cracks.

However, Larson was released from CGR in April 2020 after his use of a racial slur. And with the fallout of Larson’s actions, sponsors and teams outright refused or were hesitant to sign him. Hendrick was the only team to take a chance on him, and HendrickCars.com had to sponsor Larson for the majority of the season.

Larson responded by winning the 2021 championship with the first 10-win season in 14 years. While Larson has only won two races in 2022, it is clear that he will be at Hendrick for a long time.