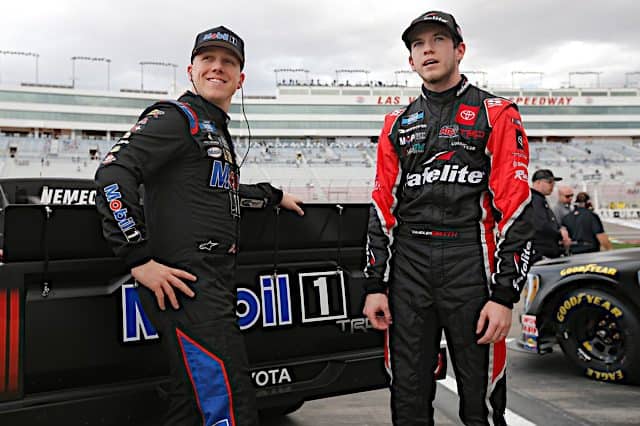 After weeks, even months, of fielding questions and plenty of speculation and rumors, we finally know where two-time NASCAR Cup Series champion Kyle Busch will land.

As with pretty much every bit of news in the sport over the Kansas Speedway race weekend, the news beat the actual announcement. The Athletic first reported Busch’s plan to move to Richard Childress Racing and Chevrolet after spending the last 15 years with Toyota and Joe Gibbs Racing. That news was then confirmed with an official announcement from the NASCAR Hall of Fame on Tuesday (Sept. 13).

Who cares, right? After all, we’re here to talk about the NASCAR Camping World Truck Series, and while a Cup driver’s future plans don’t typically have a trickle-down effect on other series, this one actually does. In fact, it will ultimately end up playing a major role in Toyota’s driver development program.

Perhaps the biggest elephant still standing in the room is where does Kyle Busch Motorsports go from here? It’s a question we’ve asked in this column before, albeit under different circumstances, but it’s still one left to be answered as the 2022 season continues its race toward the championship.

Founded in 2010, KBM has seen its fair share of ups and downs. From contractor disputes early on to sponsorship gone wrong, the team has seen its fair share of drama. But it’s also seen all sorts of success. From race wins (98 and counting) to driver championships (Erik Jones in 2015; Christopher Bell in 2017) to owners’ championships (2015, 2017), KBM has built one heck of a legacy in the Truck Series in the 13 years since its debut.

Consider for a moment just some of the drivers who are now household names in the sport that have come through the ranks at KBM: Jones, William Byron, Bubba Wallace, Daniel Suarez, Bell, Noah Gragson, Todd Gilliland, Harrison Burton. All of those names are Cup drivers today, albeit Gragson won’t be full-time until next season.

While the team has had its share of drivers that have come and gone, nothing more than a blip on the radar of its history, there’s no denying the organization is an important part of the development process in NASCAR. And that’s why the trickle-down effect of Busch’s decision is so important to the Truck Series, to the point it even came up in one of his many media availabilities.

A couple of months ago at the Indianapolis Motor Speedway road course, in the midst of contract talks and spending each race weekend peppered with questions looking for answers to a question even Busch didn’t have yet, the driver/owner made some strong comments when he was asked whether KBM’s Truck Series team gave him any sort of bargaining power in wrapping up his own contract.

“I would like to think that it does, but it can also be a burden and a little bit of a headache, where teams you talk to they don’t want carry the burden of that, they don’t want anything to do with it,” Busch said. “There’s 50 families over there that are important to me that we keep that going as best as I possibly can.

“Obviously, I have to look out for myself and my family’s future, but also all of them.”

Read that again: “it can also be a burden and a little bit of a headache.”

Of course, my brain immediately locked onto the words burden and headache, despite the focus of the overall messaging in his response being that of looking out for those who work for him in the Truck Series. Essentially, the burden and headache were Busch’s nod to his responsibility to consider the families beyond his own that would be affected by anything that didn’t leave him with JGR and Toyota.

As for the future of KBM? Well, that’s still a bit up in the air as those details aren’t complete just yet.

“Obviously, there was an announcement today with RCR and Kyle Busch and KBM has not been a part of that yet, although we are still working on that sort of stuff with General Motors and Chevrolet,” Busch explained. “Kyle Busch Motorsports intends to compete in the Truck Series as a Chevrolet-branded team next year. Whether that’s two, three, four entries, we’re not quite certain on that yet, but we’re working through those details as we can right now, and hopefully, again, we can have an announcement on that here shortly.”

As for the driver development aspect that KBM has clearly given the Truck Series through the years, Chevrolet currently works in conjunction with JR Motorsports and GMS Racing under the banner of Drivers Edge Development. According to the website, the program is designed to “groom the next generation of racing superstars through a tiered competition pipeline coupled with comprehensive off-track education.”

“The options in which that are kind of laid out on the table are definitely driver development drivers,” Busch told racingamerica.com. “There are some young kids in there. There are diversity of kids in there as well, too.”

Now, with the Cup side of the decision made, the attention can be turned to the Truck Series team and what it will look like next season, most of which is still unknown at this time.

“We’re still talking to Kyle about KBM,” Chevrolet Motorsports general manager Jim Campbell explained. “In Trucks, we have two drivers that made the playoffs, one of them got washed out last week. We only have one left. We’ve got to be stronger in the Truck Series. Where that goes specifically with KBM, we’re still working on it.”

But what about the organization’s current driver lineup? Chandler Smith and John Hunter Nemechek are still in the playoffs following last Friday night’s (Sept. 9) Round of 10 cutoff race at Kansas Speedway. Meanwhile, Corey Heim has turned plenty of heads this year in his part-time Truck Series schedule, winning two races and snagging seven top 10s in 12 starts.

“I’ll suggest that the Toyota drivers, the drivers that are a part of our program will remain part of our program,” Toyota Racing Development president David Wilson told SiriusXM NASCAR Tuesday evening. “This is the time of year there’s always a lot of discussion. Everyone wants to have a plan and have an understanding and have a comfort level as to where their seat is going to land next year, and that’s just part of the sport.

“Again, we have relations with some of these young drivers that we put in those seats. That’s part the way our relationship with KBM works. We basically backstop almost all of the sponsorship with great companies like Safelite, JBL and Exxon Mobil. And in consideration of that, we basically name the drivers, and those drivers that we work closely with, guys like Corey Heim, John Hunter Nemechek will remain part of the Toyota family.”

💭“I'll suggest that the drivers that are a part of our program […] guys like @CoreyHeim_ & @JHNemechek will remain part of the @ToyotaRacing family."

⁰🗣 @DavidWilsonTRD revealed that the current crop of @KBMteam Truck Series drivers will remain with the manufacturer in 2023. pic.twitter.com/BpvXLCOGJ1

A driver like Heim who’s up-and-coming and certainly desirable to pretty much any team that could want to put him behind the wheel based on his extremely limited performance portfolio shouldn’t have any problems making himself at home wherever he lands. He’s made so few starts with the organization that there hasn’t been a ton of work put into building chemistry

Meanwhile, Nemechek sits in a different position, and that was clear based on his emotional post-race interview after winning at Kansas last weekend. It seemed cryptic at the time but makes so much more sense now.

“I think this one is even sweeter. It’s been a really tough week for myself mentally, emotionally and things that you can’t control. But it feels good to come out here and cap it off with a win and show who I am.”

Knowing what we know today, if that isn’t a driver who knows his future is up in the air, I don’t know what is. The chemistry he’s built with the No. 4 team since making the decision to drop back from Cup to Trucks is something that will all but vanish once the checkered flag flies over the season finale at Phoenix Raceway. And whether that same chemistry that’s seen him win seven times over the last two seasons will come together anywhere else remains to be seen.

The good news for Nemechek, though, is that he’s just 25 years old and has plenty of time left to race in NASCAR. It just doesn’t seem to be in the cards for him to remain with KBM, the organization that allowed him to take a gamble on himself and compete for wins and championships instead of just running around logging laps with a Cup team that just isn’t ready to be competitive enough to threaten victory lane.

Of course, Wednesday (Sept. 14) morning, another domino fell that could spell the answer to Heim and Nemechek’s futures. It’s already assumed that Ty Gibbs will take over the No. 18 in the Cup Series, but the news that Brandon Jones will leave JGR’s No. 18 NASCAR Xfinity Series team to drive for JR Motorsports next season leaves the organization with two open rides. Given the confidence Wilson shared that both Heim and Nemechek will remain under the TRD development banner, don’t be surprised if it’s only a matter of time before the pair’s future plans are announced.

Simply put, TRD losing Busch also means the manufacturer loses its flagship Truck Series development team. Just four months ago, Wilson was rather blunt in his opinion on the topic.

“Any scenario that doesn’t have Kyle Busch retiring from Joe Gibbs Racing and Toyota would be a monstrous disappointment.”

Fast forward to September and that monstrous disappointment for TRD is here, but it’s only the beginning of what the Truck Series future holds for KBM.

Kyle Busch and KBM 4…Toyota Zero. This is bigger than Toyota thinks…they will be paying for this over the next few years. I hope for their sake Ty Gibbs is next coming of Dale Earnhardt or they’re in big trouble.