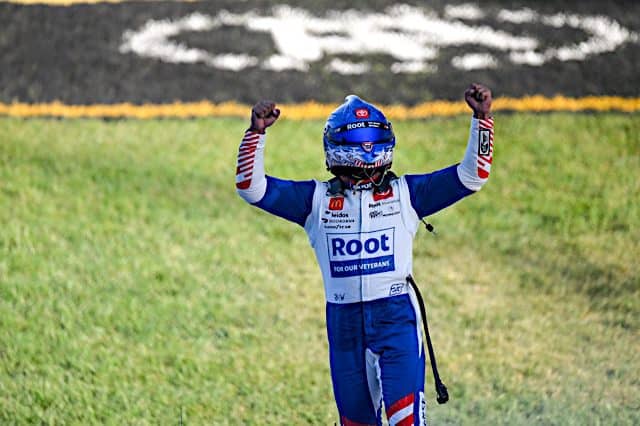 I was never meant to be a NASCAR fan.

And I definitively was not meant to be a NASCAR columnist for the last 15 years in this wonderful corner of the Motorsports internet. I spent my formative years in England, steeped in the traditions of Formula 1. Ayrton Senna, Mika Häkkinen and fellow Brits Nigel Mansell and Damon Hill were my original driving heroes.

NASCAR, or indeed the NTT IndyCar Series, were never meant to be in my sporting universe (albeit an already expansive one – come on, you Gunners).

But as it often does, life takes you down curious paths you never could have foreseen and when I took a job in advertising to work on Sprint’s sports sponsorships back in 2005 it was sold to me as primarily NFL with maybe 10% of the day job being NASCAR.

Turns out that 10% was more like 90%, so I had little choice but to throw myself into the world of driving fast and turning left. The first race I watched happened to be won by Kyle Busch (who’s been in the news a bit this week), his maiden victory driving the No. 5 Kellogg’s Chevy for Rick Hendrick at Auto Club Speedway.

Not going to lie, I hated every excruciating second with a burning and visceral passion. But, since it was my job, I watched again next week, then the week after etc. and as I got to learn the nuances I began to fall slowly and inexorably in love. And just for the record, the first piece of creative work I developed was a retirement ad for Rusty Wallace.

Over the years since I’ve dipped in and out of motorsports, but there are two drivers in particular I’ve worked with for extended periods: On the IndyCar side it was Will Power and on the NASCAR side it was Bubba Wallace. So, although as columnists we remain neutral and objective in our assessment of the sport, last Sunday (Sept. 11) was a day I particularly enjoyed.

I’ll start with Power. The 41-year-old native of the impeccably-named Toowoomba in Queensland, Australia picked up his second IndyCar championship eight years after his first in 2014. For Power, it was a year of unerring consistency and maximizing his results race-by-race.

“The approach was very much going the long game, making sure that we finished every lap, every race and that I was very consistent,” Power said.

Power also led the series in podium finishes (nine) and average finish (5.9) even if he only took one checkered flag in Belle Isle. Wins are great, for sure, but not having bad finishes was the hallmark of this championship – think Matt “The Robot” Kenseth pointing his way to the NASCAR Cup Series crown in 2003.

Power also broke the legendary Mario Andretti’s record for pole positions. His 68th (and counting) in 268 starts is an impressive 25.3% clip which speaks to Power’s ability to lay down a lightning fast single lap, but it is somewhat ironic in a season where he breaks Mario’s record his title came by running all the laps, not just the fast ones on a Saturday.

When I worked with Will he was in the early stages of his open wheel career (2011-2014). He won 12 races across three seasons including a career best sixth in 2011. We used to run win ads in the USA Today and we had to basically be prepared each week with a print ad ready to go on the Monday morning such was his voracious appetite for checkered flags.

See also
Alex Palou Returning to Ganassi in 2023, Will Test for McLaren F1

On a personal note, Power was a great human to hang out with on set or capturing other ad-related content. Australians and Brits have always had spirited banter and it didn’t matter than I was the ad guy and he was the racecar driver, it was always just two “blokes” giving each other good-natured grief, which spoke volumes for the down-to-earth human he is.

I was also there at the season finale at Auto Club Speedway in 2012 when Power took a narrow 17-point lead over Ryan Hunter-Reay into the final race. He looked, to all intents and purposes, ready to win his first championship but a spin and wreck without contact while racing Hunter-Reay saw Power finish a distant 24th and an agonizing second in the championship.

The little told story of the night was that the Penske team actually managed to repair Power’s ailing ride and get it back out onto the track — a job Marty Snider told me was one of the most impressive repair jobs he’d ever seen – but by then it was too little too late. All that being said, I’m delighted for Power to win a second title and when he finally hangs up his driving gloves he’ll rightfully be remembered as one of the true greats in IndyCar.

On the NASCAR side, Sunday was a banner day for Wallace as he recorded a dominant second Cup victory at Kansas Speedway. Worth noting, too, that in the seven-plus decades of NASCAR only 138 drivers have recorded two or more top-echelon victories. That’s a pretty elite group. I worked with Bubba as part of the DoorDash sponsorship, so I was there for his transition from Richard Petty to 23XI Racing which was certainly exciting to watch behind the scenes.

As with Power, I got to spend some time with Wallace (albeit less than normal given it came during the early stages of the pandemic). On race day mornings, when DoorDash was the primary paint scheme, we conducted 30-minute Zooms with groups of loyal fans and Bubba was always entertaining, always engaging and never shied away from any question.

In those moments, away from the bright lights of the track, I got to see what a genuinely warm, funny and kind human being he really is. And honestly, I find it despicable the hate that gets thrown his way. It’s beyond ridiculous, it truly is. I realize there’s little I can do to change that, but I fervently hope in time, attitudes toward him change. He’s a stellar human and not a bad wheelman either. Here’s hoping there are many more wins to come for both Wallace and Power.