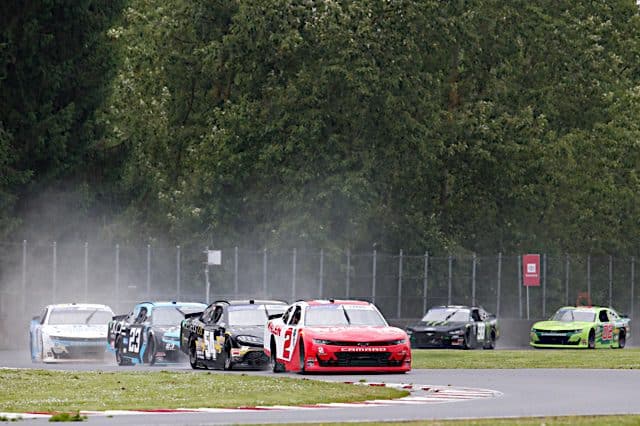 And apparently this a problem?

This opinion was shared by people online after the announcement. Some of them may read this site.

In 2023, the Xfinity Series will return to Circuit of the Americas, Watkins Glen International, Portland International Raceway, the Charlotte Motor Speedway ROVAL, Road America and the Indianapolis Motor Speedway road course; the same six tracks it visited in 2022. The Chicago street course and Sonoma Raceway are the newest editions for next season, with both tracks making their respective debuts on the Xfinity Series schedule.

Again, apparently this is a problem.

Yes, NASCAR should visit more short tracks and run on some half-miles. The NASCAR Craftsman Truck Series especially should be tearing up shorter circuits across the country, and the Xfinity Series of old had some of its best races on these regional beacons of short-track goodness that are no longer on the calendar. Going back to them — or visiting new ones — would be welcome.

Asking for more road courses and short tracks on the schedule don’t have to be mutually exclusive requests.

For starters, the story here is that just under a quarter of the Xfinity schedule is run on road courses. Add the four short tracks — two dates at Martinsville Speedway with one apiece at Bristol Motor Speedway and Richmond Raceway — and over a third of the races are on tracks that, frankly, provide the most excitement on the schedule with the current Xfinity car.

It’s true that the NASCAR Cup Series has seen a marked improvement of its product on the intermediate, so-called cookie-cutter tracks in recent years. It’s also true that Xfinity races at said tracks are not snooze-fests every time; occasionally there’s a real winner, a classic that’ll be remembered past, say, one year.

It’s also true, though, that the Xfinity Series doesn’t need to be visiting a lot of these tracks. How often do you see fans clamoring for Xfinity or Truck events at Michigan International Speedway? Texas Motor Speedway? If anything, it’s more a matter of adding support races to tracks that are on the Cup Series schedule. There’s no defined appetite.

Not to say that eight road courses on next year’s schedule will solve the problem of companion races entirely. Of those eight, six will still be run in tandem with the Cup Series.

Would a companion weekend at a road course be more preferrable to one at Kansas Speedway any day? Absolutely. The road courses add intrigue, unpredictability and a refreshing perspective.

Well, as long as AJ Allmendinger doesn’t win all of them.

Think about it, though. Even when Xfinity runs at short tracks in a companion weekend with Cup, the end result is often the same from place to place: You’re not going to see too many Cup drivers coming down to the lower series, and there isn’t a proliferation of ringers doing one-offs. It’s just another weekend.

Xfinity road course races attract ringers in ways Cup races don’t (or perhaps can’t, due to charters). You’ll also see more Cup full-timers double dipping in order to get experience for their Sunday showdown at the same track, especially when it’s a new-to-the-schedule course (one imagines Chicago next year will be chock full of them). Sometimes that means the Cup guy will run away with the win — see Kyle Larson at Watkins Glen earlier this summer. But a Cup driver leaving with the trophy isn’t a given. You’ll also see more of said drivers competing for smaller teams instead of their Cup powerhouses — the DGM Racings and Big Machine Racing Teams of the world.

Plus, non-companion races are cool, and fans say they like them, right? Two of the road courses on the schedule are, in fact, standalones, with Portland remaining on its own in 2023 while Road America remains on the Xfinity schedule despite its wholly undeserved removal on the Cup side. Not enough still? Absolutely. But there’s one more standalone race for 2023 than 2022. It’s a start.

More than anything, think about how good the road course races tend to be across all three national NASCAR series. They inject the right amount of drama and unpredictability the NASCAR brass seems to crave without the general carnage the superspeedways beget. Not to say there aren’t still some bush-league types out on the track here and there that prompt some snarky tweets about the quality of the field. By and large, though, these are fun races to watch, and the dominant driver in the final laps usually wins.

Yes, the Xfinity Series needs to fill out its schedule with more short tracks, too. But eight road courses is still a step up from a ton of intermediates, and who’s to say this isn’t a more well-balanced lineup? The more road courses there are on the schedule, the more it may entice new drivers and teams to enter the series since they’ll get more use out of their cars.

The 2023 schedule isn’t perfect. But it’s a better one than last year — singlehandedly — because of road courses. Let’s focus on that for 2023 and enjoy a little more variety in NASCAR’s secondary series. The changes have been slow, but they’ve been happening; 2024 may continue that trend.

I, for one, will NOT miss having the majority of the races on the cookie cutters.

Road courses tend to showcase driver skill, way more than the cookie cutters. Just like Elliott on the cup side, AJ tends to have an advantage. But with more Road courses on the schedule, others are catching up fast.

Road courses are ok but I think a return to IRP and South Boston would increase more fan excitement than any of the road courses do/will. And by that I mean in television ratings more than actual attendance since road courses are obviously much larger and allow more fans at the track.

Just means 8 races i don’t have to waste my time watching, and more time at my local Sprintcar tracks, My local promotors thank you for pushing us away from NASACR on tv and back to our seats at some live oval trackracing