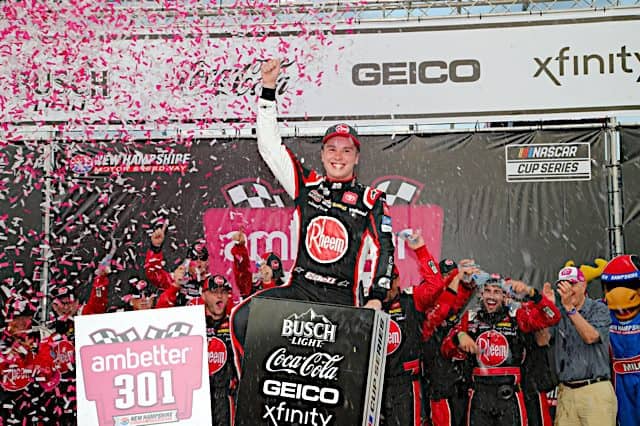 Christopher Bell is the only NASCAR Cup Series playoff driver who has clinched a Round of 12 berth. Is Bell an early favorite for the Championship 4?

Luken Glover: Calling anyone a Championship 4 favorite in 2022 is like saying someone is a favorite at a superspeedway race. That said, Christopher Bell is the biggest threat from the Joe Gibbs Racing camp right now. Sure, Denny Hamlin has two wins and back-to-back second-place finishes, but Bell has had the most consistent speed for JGR throughout the year. If he can advance through the Round of 12, the Round of 8 shapes up pretty well for him to make his first championship appearance.

Mike Neff: Bell has appeared to be the fastest Toyota in 2022, but he hasn’t been in contention to win many races. Bell will have a great chance of making the Championship 4 if the No. 20 team can start contending for wins.

Stephen Stumpf: Bell has continued to get better throughout the season, as he ran in the top five all day at Kansas Speedway. However, calling him a Championship 4 favorite would be a stretch at the moment, especially when considering what tracks are lined up for the Round of 8: the chaotic lottery of Talladega Superspeedway and the unpredictable Charlotte Motor Speedway ROVAL. JGR has been absent at road courses for much of the 2022 season, but Bell has led the way for the JGR camp with two top 10s in five road course starts this season. If Bell shows speed in the Round of 12 opener at Texas Motor Speedway and survives to the Round of 8, he certainly has a chance of going all the way to the finale at Phoenix Raceway.

Is there another lost speedway that can be revived like North Wilkesboro Speedway?

Bryan Davis Keith: There are dozens, if not hundreds, of lost speedways across the country that could easily be revived and returned to racing — be it dirt or asphalt — for a fraction of the tax dollar slush fund that’s bringing North Wilkesboro Speedway back to life. No, there’s none that come to mind that would be Cup-worthy in terms of size, but the Camping World SRX Series was able to host professional, nationally televised events at facilities that in terms of capacity and size are weekly racetracks. Bringing smaller ovals back into the fold and utilizing them for either exhibition events or even ARCA Menards Series races, since they no longer require live pit roads, could easily be viable products to cash in on nostalgia. Increasing access to local racing can and should foster interest in big-league NASCAR among new fans. No promises about the older/former fans that have spent decades lamenting the loss of North Wilkesboro, Rockingham Speedway, etc. while being treated as an inconvenient truth by the NASCAR sanction.

Stumpf: Any track in disrepair that is large enough to host Cup events won’t be able to return unless there’s committed ownership that is willing to restore the track. North Wilkesboro was the exception, not the rule, due to the state funding it received. However, while improbable, it is not impossible. The return of Nashville Superspeedway in 2021 after a 10-year abandonment was an announcement that came out of nowhere. Likewise, World Wide Technology Raceway at Gateway closed after 2010 until new ownership brought the track back to the NASCAR Camping World Truck Series schedule in 2014. If new ownership can be found, there are several speedways across the country that could return to racing in some capacity. But until that ownership is found, NASCAR is better off bringing active tracks back to the top three divisions. Tracks like Iowa Speedway come to mind.

Glover: There are two that come to mind. One is Nazareth Speedway in Pennsylvania. A lot of trees have grown around it, but you can still see the pavement, pit road and stands. The other is Colombia Speedway, a track that saw stars like Richard Petty and Cale Yarborough build their names in racing. It re-opened in 2009, but only as an outdoor event venue. With the revival of North Wilkesboro, it would be a great opportunity for NASCAR to move the All-Star Race yearly to tracks that can fit smaller fields.

Mike Neff: As much as I like to think North Wilkesboro is revived, it is a little early for that. Let’s see what things look like two or three years down the line. As far a racetrack revival goes, it would be nice to see Rockingham return, but the fans simply didn’t support it when Andy Hillenburg brought the Truck Series back in the early 2010s. It would also be fantastic to see Concord Motorsports Park and Gresham Motorsports Park return. The easiest returns would be Kentucky Speedway or Chicagoland Speedway, and it is hard to understand how they don’t have races while Kansas has two.

Kaulig Racing lost out in the Kyle Busch free agency sweepstakes. Who does it get instead?

Neff: It is hard to say, as the inside contacts seemed rather confident that Kyle Busch was going to be the guy. Looking at the way Kaulig likes to court young talent, the second car will likely be filled by an up-and-coming driver. Taking a wild guess, let’s go with Carson Hocevar.

Stumpf: Kaulig is in a tough spot for its second Cup team now that Busch is off the market. The clear choice would be AJ Allmendinger, but Allmendinger has decided against running on Sundays full time for the last two seasons. Unless that suddenly changes, he won’t be the answer. Nor are Landon Cassill or Daniel Hemric, as they are on the playoff bubble for the NASCAR Xfinity Series playoffs after a season of struggles. If Kaulig is committed to running a second full-time driver, it will likely have to poach someone from another Xfinity or Cup team. If it can’t find anyone, continuing with the current musical rotation of drivers (sans Noah Gragson) for 2023 wouldn’t be a bad idea in looking for a full-time driver for 2024.

Glover: Hemric is the first driver that comes to mind. A factor in Hemric’s decision to move to Kaulig this season was the enticement of another Cup opportunity. Despite struggles to defend his Xfinity title in 2022, Hemric has had solid runs in the team’s No. 16 Cup car in seven starts despite outside circumstances hindering him at times. While Hemric gets the knock of only having one win across all three series, he is consistent and brings experience to a team. That could well serve the other full-time Kaulig Cup driver, Justin Haley.

With the Xfinity regular season ending at Bristol Motor Speedway, will anyone below the cut line make the playoffs?

Glover: Sheldon Creed would be the overwhelming favorite to do so. An upset win at Bristol wouldn’t be a complete shocker, but with the dominance of JR Motorsports, Ty Gibbs and other strong playoff contenders, it is unlikely. Creed is 32 points behind Landon Cassill and would likely need a win while Ryan Sieg is only 19 below the cut. The gap between Cassill and Sieg can shrink or even flip before the race is even over with stage points. However, it has been nine races since Sieg has earned a top 10, with a best finish of 13th in that span. Contrarily, Creed has three top fives in the last eight races and has shown winning speed in recent weeks. If anyone can sneak into the playoffs, it will be Creed.

Stumpf: With Jeremy Clements winning his appeal, Sieg is now 19 points behind Cassill for the final spot while Creed is 32 behind. While it’s not impossible for Sieg or Creed to punch their tickets in the 11th hour, it will be a tall order. With a 19-point cushion, a solid top-10 or top-15 day would likely advance Cassill unless there is a new winner below the cut line. However, if Cassill runs into trouble early in the race, Sieg has a great chance of advancing if he is able to make it to the finish in one piece. With Creed more than half a race behind, he will likely need a win.

Neff: You never know what might happen at Bristol. Creed has a shot at grabbing a win and locking into the next round. Sieg is consistent enough that he could pick up 19 points on Cassill to grab the final spot. While history says there is little chance, there is always a chance for someone to defy the odds.

Like most long time fans, I’m happy to see North Wilkesboro come back to life. As for the tax angle, Marcus Smith learned that from the master, Bruton.

Columbia Speedway (not “Colombia”, Luken) sit right in the middle of a residential area. I grew up close enough to the Speedway to hear the cars at night, and Dad took me to a couple as a tyke. It has great history, but there’s little chance it could be resurrected for racing.

Nazareth immediately came to mind for me too. I was regularly at “The worlds fastest one mile track” for Indy Cars, trucks, Busch (Xfinity now), Featherlite mods and even an IROC race. The track and property are in pretty bad shape though. I believe most if not all of the stands have been removed. They’re lining the straight at Watkins Glen now.

But there are two bigger issues. The first are the deep and wide trenches that were dug through the track surface, to keep thrill seekers and others from taking joy rides around the track. While these can be repaired, it makes it a lot more difficult to reopen Nazareth, then someplace like North Wilksboro. The second issue is the owners, International Speedway Corp. From what I know, ISC has been trying to sell Nazareth, but one of the stipulations of sale is the next owner can’t use it as a racetrack!