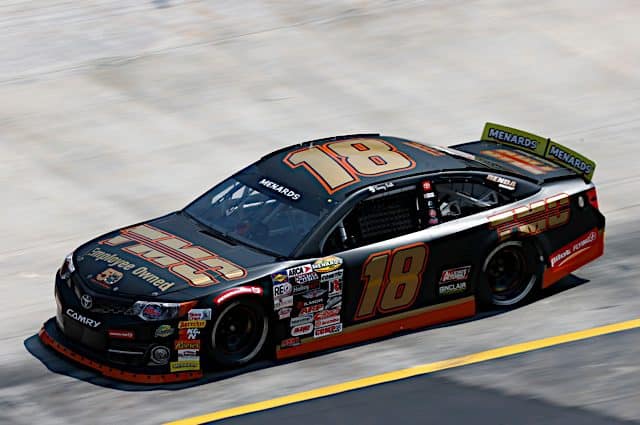 Sammy Smith dominated the ARCA Menards Series race at Bristol Motor Speedway from the pole on Sept. 15, holding off Brandon Jones in a two-lap shootout.

“It was tough [holding off Jones],” Smith told FOX Sports 1 in victory lane. “Thanks to all these guys, they brought a really fast car, and I wouldn’t have been able to do it without them. That was a tough restart there, but glad we were able to pull it off.

“I was telling these guys, the two championships mean a lot, but it wouldn’t be the same if we didn’t win the race.”

Despite having what seemed like a perfect day, the race wasn’t as smooth sailing as Smith would have wanted it to be. On lap 59, AJ Moyer and Conner Jones got together and wrecked right in front of the leaders. Not only did Smith have to slam the brakes and take evasive action to avoid Jones’ No. 55 sitting in the middle of the racetrack, but Brandon Jones also reacted later than Smith and nearly slammed into the back of the No. 18.

But no contact between the two was made, and the two of them continued to the 1-2 finish 141 laps later.

Other drivers weren’t as fortunate as Smith. Amber Balcaen’s night ended on lap 20 after contact from Justin Carroll sent her into Toni Breidinger, looping both cars.

Balcaen was not too pleased with Carroll and the incident.

“I thought we had a pretty good run going … making good laps, and just got punted out the way,” she told FS1 afterward. “It was not the No. 25, me and the No. 25 race cleanly every single race, so I would be surprised if it was her.

This was NOT Toni. Me and Toni have raced eachother clean ALL year. It was the #91 that completely dumped me. And Toni unfortunately got caught up in it too. https://t.co/eUrM8dHCkH

Gray’s third-place finish wasn’t without excitement either. He was on track to finish the East season strong before a crash on lap 122 between Stephanie Moyer and Christian Rose caused him to spin from third place and put him in the back. Gray rebounded well, though, finishing right where he was before the spin.

Meanwhile, Nick Sanchez leaves Bristol with just a five-point lead over Dye and teammate Caruth with just two races left in the ARCA season. Sanchez broke a shock in his car in the late stages of the race and fell back in the field, ultimately finishing 12th.

The penultimate race for the ARCA Menards Series will take place on Saturday, Oct. 1 at Salem Speedway. Coverage will start at 4 p.m. ET on MAVTV.