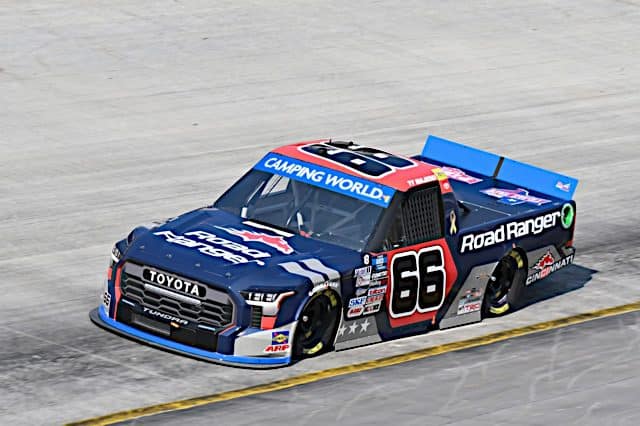 Majeski led 45 laps on the night. The former RFK Racing development driver took the lead from Smith on the penultimate restart, and had to hold off the field one more time on a late restart with 12 laps to go.

“Man, this is unbelievable. I’ve been waiting for an opportunity like this,” Majeski told FOX Sports 1 post-race. “We came guns blazing for this race, took our best truck. Joe [Shear Jr., crew chief] was aggressive on pit strategy, got us out front, and we were able to get it done. This is so cool.”

Majeski’s first career win couldn’t have come at a more perfect time, as the win also locks him into the Championship 4. Majeski and his ThorSport Racing team will now have an opportunity to run for a championship in three races time at Phoenix Raceway.

Despite Kraus starting on pole and leading 27 laps, Chandler Smith was the driver to beat, leading 89 laps and winning both stages, but when he pitted under the stage 2 caution, several trucks in front of him stayed out, including every driver that finished in the top five, and he was never able to work his way back through the field. He finished ninth on the night.

By earning the maximum amount of stage points a driver could get, Smith is the highest driver in the playoff standings after Majeski, sitting 24 points above the cutline. Zane Smith is a manageable 21 points above fifth, but Friesen, the driver on the cutline, is just nine points ahead of John Hunter Nemechek. Eckes sits 13 points behind, with Enfinger and Ben Rhodes not far behind that, as they are 15 and 18 points behind Friesen, respectively.

No playoff driver found themselves in the middle of a crash or mechanical failure tonight, but it was far from a perfect weekend for some. Nemechek had to start at the rear of the field after crashing his primary truck in qualifying, and he worked his backup truck all the way up to finish 12th, respectively.

“Man, racing here sucked tonight, honestly. I don’t want to say that but you couldn’t pass.” – @JHNemechek frustrated after a difficult day at Bristol#NASCAR @BMSupdates pic.twitter.com/g60kXDnwhh

Zane Smith was unable to post a qualifying time at all, and had to start had the very back of the field. He had gotten his truck all the way to the lead, and managed to control the field for 39 circuits, but he was beat by Majeski on the penultimate restart and had to settle for second – not without a fight from Kligerman, however.

“A good salvage of the night,” Smith said. “I wish I could have done a few things different there, obviously take the top [on the last two restarts]. The top always launches better here, but I was so bad if I was outside the PJ1. I didn’t want to get freight-trained on the outside.”

The race first went under caution on lap 36, after Josh Reaume hit the wall hard and then got hit again by a spinning Rajah Caruth. Both drivers ended up retiring from the race. Although both drivers were checked and released from the infield care center, it was later reported that Reaume was transported to a local hospital for further evaulation.

UPDATE: Josh Reaume was transported to a local hospital for further evaluation following an incident at Bristol Motor Speedway.

A few spins here and there, along with the stage breaks, slowed the race slightly, with the biggest caution of the night after the Reaume/Caruth tangle being the last one, as Dean Thompson got turned tailgate-first into the outside wall after attempting to block Tanner Gray with around 20 laps to go.

The next time the Camping World Truck Series takes to the track will be on Saturday, Oct. 1 at Talladega Superspeedway. Coverage can be found at on FOX Sports 1 beginning at 12:30 p.m. ET.