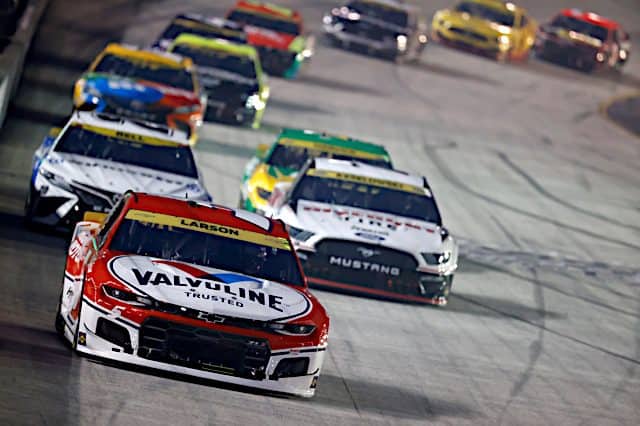 Who’s ready for some short-track NASCAR Cup Series action under the lights?

Bristol, known as the “Last Great Colosseum,” is one of three concrete tracks currently on the Cup circuit. Though it’s vastly different from Nashville Superspeedway, it does have high banking like Dover Motor Speedway. However, it doesn’t wear tires as much as Dover does; instead, rubber gets laid down in a second groove, creating more grip. Plus, it’s a half-mile racetrack instead of one mile like Dover, so cars often run closer together.

There’s a lot of unknowns coming into this weekend, as it’s the first time the Next Gen cars will run on the paved surface. Bristol was covered in dirt in the spring on Easter Sunday, and it ended in an exciting way with Chase Briscoe sending it into Tyler Reddick in a corner. Both spun around, and Kyle Busch nipped Reddick at the line.

What tire compounds will drivers use? Well, Goodyear’s bringing the same left-side compound that was used at Pocono Raceway, while the right-side tires are brand new.

Before I share my picks for Bristol, let’s go over the results of last week’s picks at Kansas Speedway:

This lineup had four drivers in the top 10, including winner Bubba Wallace, third-place finisher Christopher Bell and fourth-place driver Alex Bowman. Unfortunately, Ty Gibbs crashed out early, leaving a negative score on the slate. However, it still cashed the contest I entered.

It won $0.75 in the $3,000 Quarter Jukebox tournament. In contrast, the highest score was 347.3 and won $150 with Denny Hamlin, Daniel Suarez, Bowman, Wallace, Michael McDowell and Aric Almirola.

Hamlin has some speed this week; he posted the fastest average in 10 consecutive laps in practice. He also qualified fourth, so if he’s able to get around those in front of him, he can definitely lead laps, which would help boost your DraftKings score.

Speaking of which, he led 67 laps at Dover, but ultimately ended up 21st. Also, at Nashville Hamlin drove the No. 11 Joe Gibbs Racing Toyota to sixth place after leading 114 circuits, and though he was disqualified at Pocono Raceway, he still crossed the line first and led 21 laps. DraftKings doesn’t count post-race disqualifications, so he scored really high that day (57.5 fantasy points).

Additionally, Hamlin has had some good results at Thunder Valley, including a ninth-place result last season after holding the point for 65 laps. Prior to that, he led 131 laps in May 2020, though he ended up 17th. He also has a couple of wins, with his last one in fall of 2019.

Will Hamlin be able to avoid pit road issues and dominate the race? I think there’s a good chance he will.

OK, I know Busch qualified pretty far back in 21st place. That somewhat limits his ability to lead laps, unless his crew chief changes up the pit strategy a bit to help him get out front. However, he was fairly quick in practice, recording a top 10 average over 10 straight laps. Besides, he knows how to get his way around Bristol.

Busch won there eight times, after all, with the last one coming in spring 2019. Like Hamlin, Busch led some laps at Nashville (54), Dover (103) and Pocono (63), though the results don’t always reflect his strength.

One more noteworthy tidbit: Since Phoenix Raceway last November, Busch has finished mostly seventh or ninth at tracks one mile or less.

I know he’s going to Richard Childress Racing next year, but I’m sure he would love to finish out his season strong with JGR.

Bowman had a solid run at Kansas Speedway last week, leading 107 laps before coming home fourth. He was also 10th at Darlington Raceway two weeks ago. Plus, earlier this year, Bowman placed fifth at the Monster Mile and eighth at Richmond Raceway in the spring.

While Bristol isn’t one of his strong suits, Bowman did bring his No. 48 Hendrick Motorsports Chevrolet to fifth place there last fall. Also, back in 2018, Bowman placed fifth in the spring and eighth in the fall event.

The Arizonan rolls off third Saturday night, and if he logs some fastest laps, that will really increase your fantasy score on DraftKings.

This is more of a tournament play, but since Almirola’s starting on the pole and was fast during practice, I decided to try him. He had a top five 10-lap average during the session and was fifth overall on average.

However, he hasn’t had much success at Bristol. Almirola has crashed out three times in the past eight events there, which is a bit worrisome. Still, he has a couple of good finishes, including a fifth-place result in fall 2020 and a sixth-place result in spring 2018.

Since he’s on the pole, if Almirola can remain there throughout the night, he could become the third-straight non-playoff driver to win in the playoffs. Even if he doesn’t win, though, he will still produce a good DraftKings score if he earns a top 10 and leads laps.

If you’d rather go for position differential points, Erik Jones could be an option from 24th place (though he’s a bit more expensive).

Chris Buescher’s results on some of the smaller tracks are good for the RFK Racing driver. Most recently, he drove from 18th to third place at Richmond, even battling with Kevin Harvick for the win at one point. Also, at Dover he led 18 laps and finished eighth. Earlier this spring, Buescher went from 26th to 10th place at Phoenix, showing that he can run well on the shorter tracks early on.

Buescher also has a few good finishes at Bristol, including fall 2020 when he gained 15 positions en route to eighth. He advanced from 29th to 17th the year prior, while in fall 2016 he placed fifth.

Buescher starts about halfway back in the field in 20th, so if he has similar speed as his teammate Brad Keselowski, he should finish up near the top 10.

AJ Allmendinger is really inexpensive, so I had to go with him. He won the NASCAR Xfinity Series race at Bristol last year in exciting fashion, battling Austin Cindric in the final few laps. He was also 10th in the May 2020 NXS event after starting 27th. In the Cup Series, his most recent top 10 there was a ninth place in 2016.

Unfortunately, Allmendinger hasn’t had as much luck in the Next Gen car this season. A brake issue forced him to retire early at Dover, while at New Hampshire Motor Speedway he placed 16th. It’s not very flashy, but for someone who had the second-best 10-lap average in practice, it’s worth a shot on DraftKings.