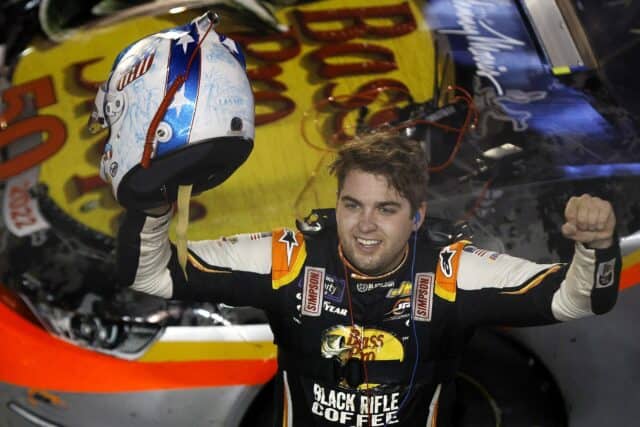 Noah Gragson stayed out under the final caution of the Food City 300 and took the lead with 25 laps to go. Despite being the only car on the lead lap with used tires, Gragson held off a last-minute charge from Brandon Jones — his successor in the No. 9 car for 2023 — to score his sixth win of the 2022 season, his third in a row and the 12th win of the season for JR Motorsports.

“Man, three in a row,” Gragson told NBC Sports after the race. “That last caution came out and I knew if we could ring the top [lane] it was going to be hard for them to get there. Appreciate Brandon Jones for racing us clean. He fed us a bumper with 2 to go and I was hanging on, scrubbing the fence. But holy s***. We won here at Bristol in 2020, but there were no fans here. This is 10 times cooler.”

For Jones, it was his second top five in a row and his best-career finish at Bristol.

“[Using the bumper against my 2023 ride] didn’t even cross my mind,” Jones told NBC Sports after the race. “I thought this one hurt the most because it was our race to win, I felt like. We fought so many different things tonight adversity wise and just kept coming back.

“Just caught [Gragson] at the wrong time every single time. I could get into the corner deeper, and I could kind of get him to the middle, but I could just never get to the exit.”

Austin Hill had a strong run at the end of the race to finish third, while Sam Mayer recorded his first top-five finish since June with a fourth despite a spin from second place towards the end of stage two. Riley Herbst recovered from a lap 19 spin to finish fifth, while AJ Allmendinger finished sixth and took home the Xfinity Series regular season championship along with the 15 playoff points that come with it.

Josh Berry finished seventh, while Stefan Parsons recorded the first top-10 finish of his career in eighth. Justin Allgaier led 148 laps but finished ninth after a late speeding penalty, while Ryan Sieg rounded out the top 10 to clinch the final playoff spot by four points after Landon Cassill went behind the wall for a mechanical failure.

The Xfinity Series’ Friday night in Bristol, Tenn., began with Ty Gibbs and Berry on the front row. Gibbs cleared Berry through the first four turns to lead lap 1, and Gibbs looked to be the car to beat in the first stage.

There were four cautions in the first 46 laps with a Nick Sanchez spin, a Riley Herbst spin, a second Sanchez spin and a Brandon Brown crash being the culprits. Despite having to fend off all challenges on the initial start and four restarts, Gibbs kept all of his competitors at bay as he narrowly edged Allgaier to win the first stage.

Gibbs, Allgaier and all the frontrunners surrendered their track position for fuel and tires on lap 90, with Sheldon Creed staying out to take the lead after pitting during an earlier caution in stage one. The race now had a leader not name Gibbs after the pole-sitter was out front for the first 89 circuits.

When the race went green for stage two, Allgaier moved up to second and immediately challenged Creed for the lead. Despite having older tires, Creed was successfully able to retain the lead despite being forced to run the top lane with Allgaier on the bottom. Newer tires eventually prevailed as Allgaier finally passed Creed for the lead on lap 125.

In the meantime, the race for the final playoff spot was heating up. Cassill entered the night 19 points above Sieg for the final spot with Creed 32 points back. Cassill finished ninth in stage one while Sieg finished 10th, while Creed sacrificed stage points by pitting to be out front for stage two.

Just past lap 100, disaster struck for Cassill. He went to pit road under green with what the No. 10 team suspected to be a flat tire, but it became clear after the pit stop that Cassill had suffered a mechanical failure. Cassill went behind the wall after running 109 laps, and his playoff hopes now rested on where Sieg and Creed would finish.

With Creed back to second place after being passed by Allgaier, he found himself seven points above the playoff cutline. Bristol looked like a must-win situation for Creed, but with Cassill behind the wall, he now had a chance at pointing his way in.

Unfortunately for Creed, his night ended just a few laps later. He was racing Gibbs for second on lap 129 when Gragson got into the back of Gibbs in the middle of the corner. The contact sent Gibbs up the track and into the wall with Creed.

Take another look at the contact by Noah Gragson to the rear of Ty Gibbs that ultimately sent Sheldon Creed into the wall.#NASCARPlayoffs // @USA_Network pic.twitter.com/fWimGdhfVK

Creed’s playoffs hopes were dashed, and the cars that had combined to lead 123 of the first 128 laps were now out of the race. With his biggest challengers in the garage, Allgaier easily cruised to a stage two win.

After the second stage, the leaders came down pit road for service. Bayley Currey and a few other drivers elected to stay out, but Allgaier took the lead back almost immediately after the final stage began.

With 80 laps to go, Kaulig Racing had finished repairs on the No. 10 car. With Cassill 112 laps down, he would only be able to pass Creed and Gibbs for position. He did just that, and Cassill was now guaranteed a 35th-place finish in the race.

With Cassill unable to make up any more ground, the goal for Sieg was clear: finish 14th or better to make the playoffs. Sieg missed out on stage points after finishing 11th in stage two, but he found himself running inside the top 10 by the time Cassill rejoined the race.

In the meantime, Allgaier continued to pace the field out front. Gragson had passed Hill and Jones to work his way up to second, and Allgaier was up to a 2.9-second lead with 50 laps to go. But Gragson immediately went to work, and he found himself within a half-second of Allgaier with 35 laps remaining.

With the race now in a 100-lap green flag run, Allgaier was unable to match Gragson’s pace, and he had to make desperate moves around lapped traffic to retain the lead. However, the long green-flag run ended with 30 laps to go as JJ Yeley crashed into the inside wall after Allgaier made contact with the No. 66 while lapping him on the frontstretch.

With 13 cars on the lead lap with 30 laps to go, everyone was presented with a choice: to pit or not to pit? Second-place Gragson was the only one that decided to stay out, as Allgaier and the others went down pit road for service. Gragson staying out proved to be vital for Sieg, as it would deny cars the chance to get back on the lead lap through the wave around. With Sieg running in the top 10 with only 13 cars on the lead lap, all he had to do was make it to the finish in one piece.

But for Gragson, the decision to stay out looked like a disaster after every other car on the lead lap pitted. Allgaier had dominated the race, and he was set to restart on the front row. But as USA Network came back from commercial under caution, they announced a devastating blow for the No. 7 team: Allgaier had sped on pit road.

Allgaier’s speeding penalty looked all the more egregious when the third-place Jones entered pit road more than five seconds behind Allgaier. The No. 7 had been all but guaranteed to leave the pits first unless the crew delivered a catastrophic pit stop.

In his last five Xfinity Series starts at Bristol, Allgaier combined to lead 643 laps without winning any of them. On a night where it looked like Allgaier had the car to score his first Bristol win since 2010, victory would elude him once again after leading 148 of the first 275 laps.

With Allgaier out of the picture, the race resumed for a 20-lap shootout with Jones and Gragson on the front row. Gragson got out to a healthy lead despite the tire disadvantage as Jones was left battling Hill for second. Jones eventually cleared Hill, and he was faced with a one-second gap to Gragson with 10 laps remaining.

Jones immediately cut the gap with fresher tires and clear track. With five laps to go, he was right at Gragson’s back bumper. Despite having the faster car, however, Jones was unable to get around Gragson in time as the No. 9 car held on to close out the regular season with three straight wins.

By finishing 10th, Sieg clinched his spot in the 2022 Xfinity Series playoffs. Despite the heartbreaking result for Cassill, he went over to Sieg after the race to congratulate him.

The Xfinity Series playoffs will begin on Saturday, Sept. 24 at Texas Motor Speedway. The cars will hit the track at 3:30 p.m. ET on USA Network for the Andy’s Frozen Custard 300.

Hopefully Gragson’s maturity will catch-up with his driving skills (which are immense and almost under control at this juncture).

That said, am not impressed with shot-gunning a beer at the finish line interview. I drink an occasional beer and have a toke now & then, but mixing driving-and-drinking on a national broadcast seems, well, slightly idiotic.

This sort of public display makes it harder to teach my kid any difference between right-and-wrong, and making intelligent decisions.

Race winning drivers have drunk beer or champagne in victory lane, almost as long as there has been racing. Are you upset when Super Bowl winners, or World Series winners are shown drinking on the field or in the locker room, after they’ve won? Yes, I know they aren’t driving then, but neither was Gragson at that point, the race was over.

So let me see if I understand this, you “have a toke now & then” (something that’s still illegal in many states), but then blame a race car driver who has a beer after winning a race, for your inability to teach your kid right from wrong, really, really?

Gragson’s writing some checks, that are going to be cashed, probably sooner rather than later.

JD in NC
Reply to  johndawgchapman

I’m sure Creed would have no remorse whatsoever if he were to dump Gragson at Phoenix.