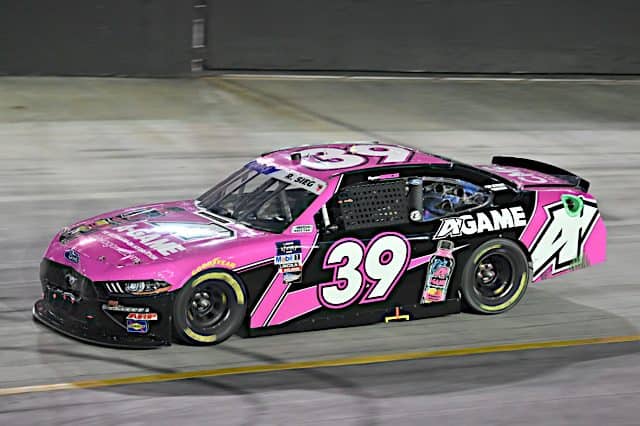 The smaller team of Ryan Sieg‘s RSS Racing topped the much bigger entries of Kaulig Racing’s Landon Cassill and Richard Childress Racing’s Sheldon Creed to claim the 12th and final NASCAR Xfinity Series playoff spot. Problems for both Cassill and Creed, along with a 10th-place finish for Sieg, was enough to get the No. 39 team the final spot by just five points over Cassill.

“Amazing to find ourselves going to the next round with our small CMR 39 team going to the big boys and trying to get all we can get going to Texas, Talladega and the [Charlotte Motor Speedway] Roval,” Sieg told Frontstretch. “It’s pretty exciting right now. We were pretty much out of it going into this race, but find ourselves on the other side of it, which is a positive.”

“Hopefully, we’ll get some more faster cars coming to the next coming tracks.”

Sieg came into the race 19 points behind Cassill for the final spot. Creed, meanwhile, essentially needed to win to take the spot.

Cassill passed Sieg in the closing laps of stage 1 to finish ninth and add one more point to his lead. But shortly after, Cassill pulled the car into the garage after smoke started pouring out of the hubs.

“I don’t know what happened, you would have to ask my crew,” Cassill said. “Something mechanical.”

The Kaulig crew made repairs on it, but Cassill lost 112 laps in the process. The result was a 35th-place finish for the No. 10 team, completely evaporating Cassill’s lead over Sieg. From that point, Sieg only had to finish in the top 14, and he brought it home in 10th.

“My emotions are not the best at the moment,” Cassill said. “I’m pretty angry and disappointed. But it’s been a long regular season up to this point. I’ve had a lot of opportunities to score points.

Sieg said that the crew wasn’t informing him of the point situation and that he was racing hard until the closing laps. Then the team had him pull back the reins a little bit and cruise to the finish.

As for Creed, the No. 2 squad went for the Hail Mary to try to get the win, and it seemed for a bit that it might work. Creed stayed out when most of the leaders pitted during the stage 1 break. He then led the next 34 laps until Justin Allgaier finally got around him.

But Creed was still holding steady near the front until Noah Gragson got into Ty Gibbs and sent him into Creed. The wreck took Gibbs and Creed out of the race and eliminated Creed from playoff contention.

Take another look at the contact by Noah Gragson to the rear of Ty Gibbs that ultimately sent Sheldon Creed into the wall.#NASCARPlayoffs // @USA_Network pic.twitter.com/fWimGdhfVK

“But that’s the way my year’s gone. We’ve been wrecked, I’ve wrecked them myself. We’ve had speed at times, and then we’ve been really bad at times. And at the end of the day, we need faster cars. That’s the reason were even out of the points is because we run eighth to 15th every week.”

The events that took Creed out were out of his control. However, it does make him feel bigger regret over not pulling off the win two weeks ago at Darlington Raceway when he and Kyle Larson collided for the lead on the last lap and he lost out to Gragson.

“That one [Darlington] didn’t sting that bad at first, but now it, that would’ve been nice to have, right?” Creed said.

For Creed, the attention now turns to finding the speed that an RCR car should have.

For Cassill, the goal now is to try to secure that first career win and make the move to Kaulig worth it. He also needs to finish the year strong as he tries to secure a ride for next year given that his current sponsor Voyager is trying to come back from filing for bankruptcy.

For Sieg and his team, it’s time to celebrate. The No. 39 team was the only team in the garage giving Gragson’s winning team a run for their money with the celebration afterward.

“It is a lot of competition and a lot of money into this, so to be racing with these guys, JR, RCR, Gibbs, it’s a big deal for our team,” Sieg said. “… It is [a David and Goliath situation]. They got the bucks and the backing behind them with Matt Kaulig, and they do a lot over there. For them to fall out the way they did is situational. Sucks for them, but we’re going to do all we can do.”

There will be no bigger party in Bristol tonight than the @RSS283839 team celebrating getting the final @XfinityRacing playoff spot. pic.twitter.com/CmEY37gmRA

Kaulig 10 crew choked under pressure. Sure glad that they Couldn’t afford KFB

Disappointing for Cassill missing the playoffs due to a mechanical issue, but as he said there were opportunities for 5 points over the course of the season. The main one that comes to mind was when he went into the last corner of the last lap at Watkins Glen in 10th and Brandon Jones dived bombed him, spinning both of them out. Cassill ended up finishing 16th. That 6 points sure would’ve come in handy last night. I’m sure he hasn’t forgotten about that move by the 19.

Landon get DQ at Loudon is the biggest reason he didn’t advance.