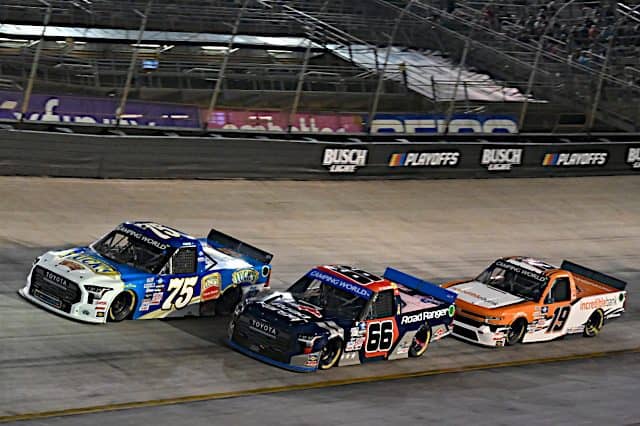 Ty Majeski can finally call himself a winner in NASCAR.

After several races this season left Majeski wondering what could have been, he finally broke through at Bristol Motor Speedway, notching his first career win in the NASCAR Camping World Truck Series.

And the win was perfect timing, too — Majeski is now the first driver to lock himself into the Championship 4. He can now sit back for the final two races of the Round of 8 and let the other drivers duke it out while his No. 66 team prepares for Phoenix Raceway in November.

Chandler Smith was far and away the dominant truck of the night. He started the night on outside pole next to Derek Kraus, who just barely edged him for the pole in qualifying. While Kraus led 27 laps, Smith eventually broke away with the lead.

Smith swept both stages and led 89 laps of the 200 total. With the recent momentum he has had and conversations of whether or not the championship runs through the No. 18, it looked as if Smith was going to win back-to-back paved Bristol truck races.

However, when Smith and other leaders pitted under the stage two caution, several other drivers stayed out in an attempt to stretch their fuel to the end of the race.

It worked, as everyone who finished in the top five were drivers who stayed out and mired Smith deep in traffic. As he spent most of the night out front, he never knew how his car worked in traffic and was unable to crack the top five again. He finished a “disappointing” ninth on the night.

What a year for Kligerman and Henderson Motorsports.

The small team based in Abingdon, Va., has shown speed at every race it’s entered so far in the 2022 season and is on pace for a record year with Kligerman: six top 10s in 10 starts, including an upset win at Mid-Ohio Sports Car Course.

Bristol was no different. Kligerman found himself in the top five for most of the final stage and was battling for as high as second toward the end before coming home third.

It raises the question of what could happen should the team and Kligerman decide run for a championship.

On lap 36, the first caution of the night flew after Josh Reaume got loose and smacked the wall. A few seconds later, Rajah Caruth slid in an attempt to avoid Reaume and instead spun right into the side of Reaume.

Definitely not the worst-looking crash in recent history, but the damage was enough to take both drivers out of the race. Both drivers were checked and released from the infield care center, but later on in the race it was reported that Reaume was transported to a local hospital for further evaluation.

An update was shared by the team later in the night, stating that Reaume was diagnosed with a concussion from the accident.

Jesse Little announced Sept. 14 that the Truck race at Bristol would be his last, as he was calling it a career in driving following the race. He ended up bringing home his Young’s Motorsports No. 02 home in 25th.

See also
Jesse Little Stepping Away From Racing After This Weekend

Little is moving on to a role with NASCAR, though his position with the organization has not been specified.

With Majeski locking himself into the next round, just three spots remain to compete for a championship at Phoenix in November. Surprisingly, no playoff driver failed to finish; Ben Rhodes was the worst of the eight, and he still managed to finish a respectable 18th.

Chandler Smith currently sits 24 points above the cutline, aided by his 20 points earned by winning both stages. Right behind him is Zane Smith, 21 points above the cutline, while Stewart Friesen is the last driver currently in, nine points ahead of John Hunter Nemechek, the first driver out as they run. Christian Eckes (-13), Enfinger (-15) and Rhodes (-18) are also looking for big weekends to get on the positive side of the cut line.

With two races still to go in the round, it’s still very up in the air of who moves on with Majeski.

Another race, another good finish for Corey Heim. His 10th-place finish earns him rookie of the race.

It’s a shame Caruth’s night ended early, because his Circle Pay Chevrolet would have looked good under Bristol’s lights.

Got nun left to do but win 🤴🏾 pic.twitter.com/9BWRgfBV2U

A paint scheme that utilizes non-contrasting colors is unique, and Spire Motorsports did a fantastic job designing a scheme that showcases the green, blue and purple proportionally.

The Truck Series gets an off-week before heading to the high-banks of Talladega Superspeedway for race two of the Round of 8 on Saturday, Oct. 1. Coverage is on FOX Sports 1 and begins at 12:30 p.m. ET.