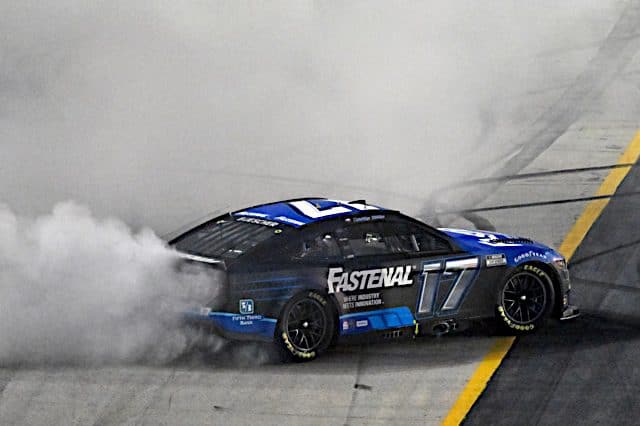 It took a two-tire pit stop with about 60 laps left to go at Bristol Motor Speedway to get clean air for the No. 17 RFK Racing driver.

“This is just so special, this team does such a great job,” Buescher told NBC Sports after the race. “Just so special here at Bristol. I love this racetrack. I love the fans. I love every time we come here, so special to me. Lost one that had really broke our heart back in 2015 on the Xfinity [Series] side with [Scott] Graves on top of the box so this makes up for that.”

When asked whether he was worried about the two-tire call on the last pit stop, Buescher replied, “Not one bit. It was up to me at that point. Just hold on, and make it work. We had a really fast Fastenal Mustang. Just so proud of everybody. We knew we had a good racecar after practice and didn’t quite get the job done in qualifying. But what a racecar. It’s special. To get RFK in victory lane for the first time. We had great racecars, Brad [Keselowski] had really good speed too.”

Tyler Reddick, Kyle Busch, Austin Dillon and Kevin Harvick ended up below the cut line after the race.

Blaney’s issues continued throughout the early portion of the race, which included a tire coming off on pit road, and he eventually went behind the wall for repairs on the rear end of the car. He came back out on the track on lap 266.

All these problems brought the caution out several times, allowing for differing pit strategies. The RFK Racing duo of Keselowski and Buescher were among those who had stayed out, and the clean air helped them stay up front. Keselowski ended up winning stage one.

Buescher stayed out, as did many others, and held off advances from Harvick to maintain the lead through about lap 237.

During this period, four Toyotas and one Chevrolet, Alex Bowman, reported power steering problems, including both 23XI Racing drivers, Bubba Wallace and Ty Gibbs. The pair’s pit crews worked on the cars behind the wall and sent them back out late in the race (lap 290 for Wallace; lap 317 for Gibbs).

A couple of Joe Gibbs Racing teammates also had troubles: Martin Truex Jr and Hamlin. Truex’s powersteering gave out, as it blew the seals out. Hamlin had a right-front tire go down around lap 235, which also brought out the caution. He was able to continue.

A third JGR driver, Bell, inherited the lead when Buescher pit on lap 237, going on to win stage two.

Bell ended up leading the next 100 laps, while the fourth JGR Toyota of Busch had an engine failure around lap 270. This once again brought out the yellow flag.

Then shortly after the next restart, the Bristol big one occurred when Daniel Suarez got loose and tagged the No. 47 of Ricky Stenhouse Jr. As cars stacked up, several got into each other, including Richard Childress Racing’s Reddick and Dillon.

Reddick was able to get back on track, but Dillon couldn’t due to a suspension problem.

Back at the front, Bell was able to lead for much of the race, though he lost the lead to Larson on pit road. Keselowski pulled a slide job on Larson on lap 388 to take first place.

Another playoff driver, Joey Logano, had a right-front flat with just over 100 laps remaining and had to pit.

Then a few laps later, race leader Keselowski had his right-front tire go down, forcing him to pit and allowing Bell to retake first.

On lap 425, pole-sitter Aric Almirola, who had spun early on when Blaney got into the wall, had a power steering problem and took his car behind the wall. About 11 laps later, Bell’s right-rear tire went flat, and the caution waved again.

Two more drivers in the playoff hunt had problems on pit road: Harvick and Hamlin. Harvick had a loose wheel but was able to back up without going very far and get a tire back on. However, his hopes to win the race were dashed with this miscue.

The No. 11 had a bit of a different issue, as some pins were damaged on the hub.

Buescher took two tires and found himself out front and in clean air. It was enough to hold on for the win, becoming the third-straight non-playoff driver to win in the Round of 16.

Cup begins the Round of 12 at Texas Motor Speedway next week. The AutoTrader EchoPark Automotive 500 airs Sunday, Sept. 25 at 3:30 p.m. ET on USA Network.

With the problems with the power steering rack and pinion that are showing up why don’t they use electronic steering?

And let us not ignore the caution because the Reverend Joe Toyota “#11 slow on backstretch” in the final results.

I wonder if the #11 Toyota was in second chasing the 17 a questionable caution flag at the end would have come out?

You know it would. I think Hamlin is the chosen one this year, I really do. I think Kyle Busch should take Hamlin out on the first lap next week and then say oops to the reverand.

It has looked that way to me too. Just the way he is covered before, during and after the race by the media. For someone that wasn’t that high in the points and has never won a championship he gets a lot of air time.

We should all go place big bets in Vegas right now for #11 to win it all – just to ensure he loses!

LOL… good idea!!! That would work.
But no matter how much NASCAR tries to help him, (and I’m saying they are, my comment pertains more to the media coverage he receives), he will find a way to choke in the end.

No edit button for some reason. I meant to say …(and I’m NOT saying they are, my comment pertains more to the media coverage he receives)…