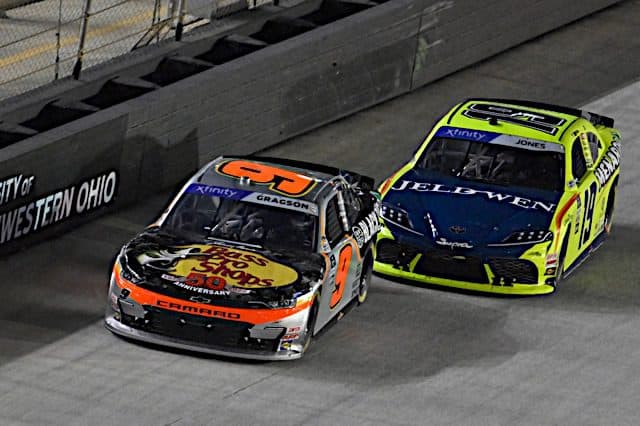 Since announcing he would be headed to Petty GMS Motorsports in the NASCAR Cup Series a few weeks ago, Gragson has apparently decided to make the Xfinity Series his sandbox. His first of the three wins came three weeks ago at Darlington Raceway, where he was essentially in the right place at the right time. Last week at Kansas Speedway the race was shortened by rain, but this week Gragson left no doubts.

HE CLIMBED OUT OF THE ROOF!@NoahGragson celebrated a win at @BMSupdates in classic Noah Gragson fashion. #NASCAR pic.twitter.com/0ztJo7uV7T

This was also the final race before the playoffs begin, and believe it or not, plenty of sparks flew (both literally and figuratively), so let’s dive in.

Jeremy Clements kicks off this week’s Winners list, and it’s not for anything he did on Friday. Clements won the Daytona International Speedway race right before Gragson began his recent reign of mullet-toting terror and locked himself into the playoffs, or so he thought. It came out later that his car had been called to a random inspection and did not pass.

NASCAR fined the small Jeremy Clements Racing team $60,000, 75 driver and owner points, 10 playoff points and deemed the Daytona win ineligible for the playoffs. Clements would appeal, and earlier this week they won that appeal, immediately inserting Clements back into the playoff picture.

I’ll delve into just how big that was for the playoff picture in a moment, but the fact that a small team can go to the board of appeals, show NASCAR the error of their ways and keep their championship hopes alive in the process is big in itself and truly shows why this series is so special.

“All in all, just a great day for our CMR A-game Ford. Just grinded it out and found ourselves going to the Playoffs. It’s amazing for our small team,” Sieg said.

To go with Gragson’s three wins, we’ve got three Winners this week. AJ Allmendinger was able to clinch the regular season championship on Friday with his sixth-place finish. Allmendinger hasn’t won a race since the Indianapolis Motor Speedway road course, but has been a model of pure consistency with 23 top 10s on the season. It may not be the trophy he and Kaulig Racing are really after, but it’s a championship and some momentum at a time when everyone needs it most.

For what has got to be the final time this season, Sheldon Creed graces the number one spot on this week’s Losers list. Creed needed a win to get into the postseason, and it looked like he had the car to get the job done on Friday night. He even held the lead at one point until being passed by Justin Allgaier on lap 125. However, on lap 132 while racing with the leaders, Gragson mashed the gas in the corner and bumped Ty Gibbs up the racetrack into Creed, ending both of their nights.

Creed’s rookie year has been full of ups and downs (mostly downs, though), but when it comes to a rookie season, it’s important to remember that Rome wasn’t built in a day. Creed is a former NASCAR Camping World Truck Series champion. He has the talent; he just has to put all the pieces together, and Richard Childress Racing has a history of being able to do just that for plenty of drivers. Oh, yeah, it also doesn’t help when your rookie teammate, Austin Hill, consistently puts up results like this.

Just one year removed from winning the Xfinity Series championship, Daniel Hemric has finished the regular season exactly like he did last year: winless. I spoke about this in an earlier Breakdown, but the championship win at Phoenix Raceway last year felt like it was going to be a springboard for Hemric. Instead, he finds himself facing the same daunting task he did in 2021. It’s been done before, obviously, but I’m not sure if a repeat is in the future.

Bayley Currey and JD Motorsports have had some incredibly solid schemes so far this season, but none this solid, and it’s earned him this week’s Scheme of the Week honor.

The Alka-Seltzer color scheme lends itself to some great possibilities when it comes to design, but what really sets this car off for me is the circled number. It’s the perfect accent to break up the lines, and the number font is one of the best on the circuit. Hats off to the JDM team this week, they nailed this one.

Our field of 12 is set, and I don’t think there could be a more competitive lineup. Gragson, Gibbs and Allgaier are the trio at the front, with Allmendinger, Josh Berry, Hill, Jones, Clements, Mayer, Hemric, Herbst and Sieg round out the final 12.

Clements being added back into the fold certainly shook things up, especially for Kaulig Racing. Now, instead of having all three drivers in the playoff picture, only Hemric and Allmendinger will be racing for the big one, while Landon Cassill has landed right outside the bubble at 13th in the standings.

Now with the playoffs squarely in our sights, I wouldn’t be a NASCAR fan if I didn’t complain at least a little bit.

I am not looking forward to all seven of these next races, and it’s not because of the drivers — it’s the tracks. Talladega Superspeedway is a wreck fest and is beloved by every carnage-crazed fan there is, but it’s not a good race unless you enjoy seeing every driver crash out. Las Vegas Motor Speedway is just another cookie cutter 1.5 mile track in a cool city, and as historic of a place as Martinsville Speedway is, there’s much better short tracks on the circuit.

If NASCAR wants these playoffs to be interesting, they have to be at the best tracks. Right now, they’re not, and that just doesn’t sit right with me.

The first round of the Xfinity playoffs are headed to Texas Motor Speedway next week for the Andy’s Frozen Custard 300. Tyler Reddick picked up the win the last time the Xfinity Series visited the long-tenured 1.5 miler, but this time there’s much more on the line. That race will start at 3:30 p.m. ET and will be aired on USA Network, the Performance Racing Network and Sirius XM NASCAR.