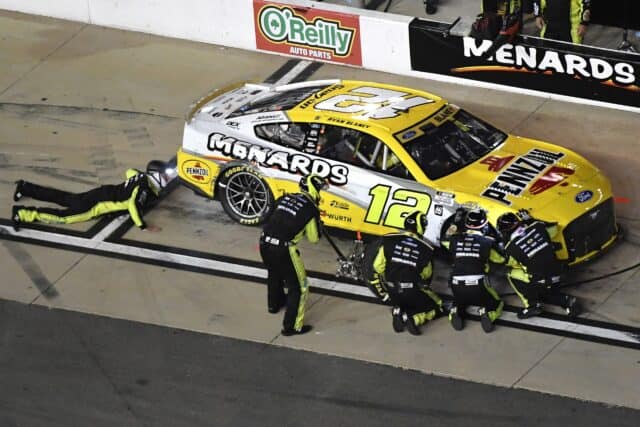 Author’s Note: Welcome back to Monday Morning Pit Box! In this new Frontstretch column, we look at the race from the perspective of a crew chief, dissecting the critical calls that affect the NASCAR Cup Series outcome every week.

This past weekend, the NASCAR Cup Series visited Bristol Motor Speedway, the World’s Fastest Half-Mile. It was the first elimination race of the playoffs, cutting the postseason field down from 16 down to 12, and chaos reigned. Tire and power steering issues were rampant, ending with a surprise driver, Chris Buescher, scoring his second career Cup win.

Buescher’s victory came on the back of a late-race pit call from crew chief Scott Graves. Graves’ call is just one of several key moments in this track position race, pit strategy proving crucial on a night where passing was a tall order.

1. Lap 44 – Brad Keselowski Stays Out on the First Yellow

On lap 44, the caution came out for an incident involving Harrison Burton and JJ Yeley. Most of the field came down pit lane for four Goodyear tires and Sunoco race fuel. However, 2012 Cup Series champion Brad Keselowski pulled a daring move with the help of crew chief Matt McCall. He stayed out, choosing track position over fresh rubber.

It was a risky maneuver with drivers behind him restarting on new tires, but it’s also a gamble that can pay off well. In this case, it catapulted the No. 6 right into contention the whole night.

Once the race went back green, Keselowski got a good jump on the restart and pulled away by almost three seconds over the first car, Denny Hamlin, that had pitted under caution. Lap 92 came around and Aric Almirola‘s spin brought the yellow out again.

From that point on, Keselowski was a force to be reckoned with. He went on to win stage one and was in contention much of the night before he succumbed to some of the tire problems that plagued most of the field. In the end, he finished a respectable 13th, but without that tire failure under green, we might have been talking about him, not Buescher, sitting in victory lane for RFK Racing.

2. Lap 222 – Denny Hamlin Remains on Track with Power Steering Issues While Hendrick Conducts a Meeting of the Minds

Hamlin’s crew chief, Chris Gabehart, left the No. 11 out on track while at the same time, the crews of Bowman, William Byron, Kyle Larson and Chase Elliott met in Bowman’s pit to discuss the best way to handle the steering trouble. They all decided it was best to leave the drivers out on track and battle through it rather than pull them in for a green flag pit stop.

The gamble paid off for almost all involved. Hamlin ended up ninth and the Hendrick trio of Elliott, Byron and Larson finished second, third and fifth. Bowman found success after his problems, too, but was caught up in a wreck on lap 278, relegating him to 32nd.

With 60 laps to go, the caution waved for Christopher Bell‘s flat tire while leading. While most of the field pitted for four fresh tires and fuel, Buescher’s crew chief Scott Graves decided to just put on two tires.

In a similar strategy to teammate Keselowski earlier in the race, albeit a bit modified in that it was a two-tire call versus no stop at all, Buescher led the field off pit road for the final time. He just needed a solid restart to make the most of it, especially with so few laps remaining.

For the No. 17 team, the chips fell into their hands as a two-tire strategy paid off. After a good restart, the last 57 laps went caution free, and Buescher sailed to victory by half a second. It was his first Cup win for RFK Racing and first victory overall since 2016.

Next week, the Cup Series begins the Round of 12 where everything’s bigger at Texas Motor Speedway. Who will be the new crew chief sheriff in town when the field hits the 1.5-mile oval next week?