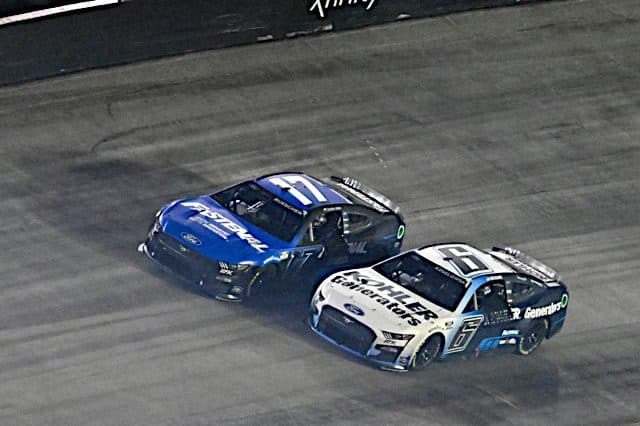 Chris Buescher led the most laps on the night and held off a hard-charging Chase Elliott to win the Bass Pro Shops Night Race at Bristol Motor Speedway. The win is just the second of Buescher’s career, with the first one coming at a rain-shortened strategy race at Pocono Raceway in 2016.

Buescher survived a race where driver after driver experienced an issue, and a bold pit call by crew chief Scott Graves to take two tires was the winning move. The win also marks a complete sweep of non-playoff, upset winners in the Round of 16 after Erik Jones took the opening race at Darlington Raceway and Bubba Wallace pulled off the win at Kansas Speedway.

And don’t forget Buescher’s teammate Brad Keselowski had his best race of the season, leading 109 laps and winning stage one after not pitting the entire 125-lap stage. Unfortunately, a flat tire while leading late ended his hopes of winning, and he finished a disappointing 13th. Nonetheless, Keselowski can now call himself a winner as a NASCAR Cup Series owner. It was an all-around promising night for RFK Racing, which combined to lead 278 laps of the 500-lap event, and Bristol could potentially be a turning point in the team’s future success.

Tires and mechanical issues ravaged the field over the course of 500 laps. Leader after leader suffered an issue of some sort.
Aside from Keselowski’s issue, Christopher Bell was the cause of the night’s final caution when his right rear tire went flat while leading.

Although it seemed everyone had an issue with tires, most of the victims were Ford drivers. Austin Cindric, Kevin Harvick, Ryan Blaney, Harrison Burton, Joey Logano and JJ Yeley were all Blue Oval drivers who suffered from a tire failure or loose wheel.
Denny Hamlin also had a right front tire failure after reporting power steering issues, which was another common problem on the night. Along with Hamlin, all the Toyota drivers (excluding Bell), plus polesitter Aric Almirola, Chase Briscoe and Alex Bowman, fell victim to power steering or other mechanical issues. Hamlin was the only driver of that group to finish the race and he did so with a respectable ninth-place run.

Fans and drivers alike were not happy with the failures, and it raises even more questions about the safety and structure of the Next Gen car. Considering the recent weeks have been full of criticism for the car, this race certainly did not help its case.

It was elimination night at Bristol, as the playoff field was cut from 16 to 12. Every driver eliminated had an issue that took them out of the race. Kyle Busch suffered another engine failure (his second in three races). After Busch initially walked straight to his hauler without speaking to media, he eventually told NBC Sports that he was “flabbergasted” by the failure.

Meanwhile, his future Richard Childress Racing teammates Austin Dillon and Tyler Reddick were caught up in a big wreck in the final stage, which began after another playoff driver, Daniel Suarez, got loose and turned Ricky Stenhouse Jr. in front of the field. Both RCR drivers suffered too much damage to the body and suspension of their cars to continue.

Harvick was already in a must-win situation heading into the race after two straight DNFs to start the round, but the aforementioned loose wheel put him behind the 8-ball, from which he could never recover.

The 12 that are moving on were able to escape by the skin of their teeth, especially Blaney.

It appeared Blaney’s night was over before it even started but somehow he made it through to the Round of 12.

The driver of the No. 12 was one of the first victims of tire failure, but when he pitted to change tires, he left without his left rear secured, causing the wheel to fall off and damage the toe link.

He loses a wheel on pit road after pitting for a flat tire. #NASCARPlayoffs pic.twitter.com/r3pWYMqlMp

Blaney’s car somehow made minimum speed but was struggling to even stay straight. After several repair attempts and falling 162 laps down he finished 30th with almost no shot at advancing.

At least until others ran into their own issues….

As the only winless driver in the playoff field, the team needs to figure out how to win next week, or Blaney may not be so lucky getting to the Round of 8. Theoretically, the team shouldn’t have to worry too much since the series returns to Texas Motor Speedway where Blaney won the All-Star Race earlier this year.

Four drivers have been eliminated from playoff contention, and now it’s time to wipe the slate clean and eliminate four more.
Next Sunday (Sept. 25), the Round of 12 begins at Texas. Blaney is the most recent victor there, and Kyle Larson won this race last season. Playoff drivers who may not have had a stellar opening round get a chance to turn it around on the 1.5-mile oval.

For anyone who’s worried about the uncertainties Talladega Superspeedway or the Charlotte Motor Speedway ROVAL bring to the table, Texas is a crucial race to win or at least score enough points to take some of the pressure off for the rest of the round.

With so much chaos lying ahead, drivers will be clawing their way to the best finish they can at Texas so they can have some sort of cushion heading into the rest of the round.

Bell’s win at New Hampshire Motor Speedway earlier this season slotted him into the playoffs and raised questions on whether he was a waste of a playoff spot. But Bell had the strongest opening round of any of the playoff contenders, locking himself into the next round after Kansas.

Bell’s success in the opening round was solely because of stage points. In total, Bell scored 50 stage points (plus two playoff points at Kansas and Bristol) across the six stages in the opening round. That is equivalent to winning a race plus a stage in bonus points that Bell received, in addition to his stellar finishes, with his worst finish coming in the first race of the round, coming home fifth at Darlington.

Bristol was a clear indicator that Bell and his No. 20 team are on the horizon of another win soon. The Round of 12 is a make-or-break round for any championship contender, but he has had great finishes at all three racetracks in previous years. Bell’s team has all the momentum right now, and despite entering the Round of 12 seeded seventh, his consistency in his points racing can help him continue to compete for a championship, especially if the other playoff drivers continue to falter.