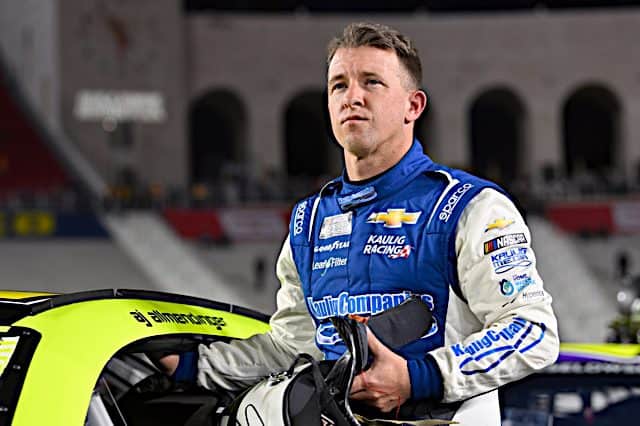 In over 15 years of watching NASCAR since I was a little kid, that was one of the craziest non-superspeedway races I have witnessed. I’m sure I could get a second motion on that.

Tire blowouts, power steering failures, engine failures, loose wheels and a playoff cut-off race to add the cherry on top made Bristol one of the biggest races of attrition in 2022. For the underdogs, it was AJ Allmendinger leading the pack.

A day after successfully defending his 2021 NASCAR Xfinity Series regular season championship with another one, albeit in a much less dramatic way, Allmendinger climbed into Kaulig Racing’s No. 16 NASCAR Cup Series car en route to another top 10.

Not sure what’s happening but it’s pretty sick! 😵‍💫 pic.twitter.com/k5ispikwio

After starting in 13th, Allmendinger struggled with grip early on, sliding outside the top 20. After some adjustments, he was able to rally to 14th in stage one.

The No. 16 struggled in traffic during stage two, with Allmendinger reporting the car was “bouncing.” With just under 45 laps to go in the stage, Allmendinger stayed out on track during a yellow to gain track position but slid back to 16th from the top 10 by stage end.

You can almost relate Allmendinger’s driving style to his career: he is an absolute grinder. That drive for more has earned him strong results in the Cup and Xfinity series, and it proved to be worthy once again in the final stage. Allmendinger quickly drove into the top 10, which allowed him to avoid the melee behind him when a big wreck occurred with just over 200 laps to go.

The Los Gatos, California native really shined in the closing stages. While running well inside the top 10, a caution flew for Christopher Bell with 64 laps to go. During pit stops, Allmendinger’s crew gained him three spots, allowing him to begin the final restart in row two. Stronger cars were eventually able to overtake, but one of NASCAR’s most determined journeymen held on to finish seventh after a grueling 500 laps.

In a race where mechanical failures dominated the event, it had to feel good for Kaulig to survive with a strong night. It happened 24 hours after mechanical issues cost one of its Xfinity drivers a playoff spot in Landon Cassill and threatened to do the same for another in Daniel Hemric.

In 13 Cup starts while splitting the No. 16 between Hemric and Noah Gragson, Allmendinger has come to life, making many wonder out loud how feasible it would be to get him to return to Cup full-time. In his last five starts, he has recorded four of his five top 10s on the season, including a pair of seventh-place results. That includes a stretch of three consecutive top 10s, which is his best stretch since 2016. In 22 starts in Thunder Valley, Allmendinger recorded his best career finish at Bristol.

Overall, it was a quiet and productive night for Allmendinger. Based on how the race played out, that has to feel like a win.

Michael McDowell narrowly missed out on his 12th top 10 of the season, settling for 11th. He drove into the top 10 in the final stage, looking poised to go even higher. However, he reported an issue that startled crew chiefs more than sudden fireworks: power steering.

Staying out under this caution, @Mc_Driver fears his power steering is slowly failing. He's told to run his fans as much as possible to keep the steering box and fluids cool. He will restart 7th @LovesTravelStop | @Luberfiner pic.twitter.com/O0BW0DEaxZ

McDowell was able to wheel his car without further issue and brought home his second-best finish at the half-mile track. The 37-year-old has four finishes of 16th or better in four of the last five races.

Right behind McDowell in 12th was Allmendinger’s “son” and Kaulig teammate, Justin Haley. Like Allmendinger, Haley was able to keep his car out of trouble and had a solid night from start to finish. At one point, he passed Kyle Busch for seventh on track in stage two. The race was only Haley’s second start on the paved Bristol surface, and his first in solid equipment. The 12th-place run is Haley’s best finish since a seventh at Atlanta Motor Speedway in July.

While a few underdogs fell victim to attrition, it opened the floodgates for others to capitalize. Corey LaJoie joined Allmendinger, McDowell and Haley in the top 15 by placing 15th. LaJoie ran in the top 20 for a fair amount of the race, rewarding him with his first top 15 since Talladega Superspeedway in April. It was also LaJoie’s best result at Bristol.

Another driver who earned the spotlight was Cody Ware. He’s quietly achieved career milestones several times this season in largely underfunded equipment with Rick Ware Racing. His 17th-place run at Bristol is his best finish on a non-superspeedway in his Cup career.

As is common with these kinds of races, a few underdogs fall victim to the chaos.

Put Erik Jones on that list, as he had a second-straight race to forget following his Darlington win two weeks ago. On lap 197, Jones was side-swiped by Petty GMS Motorsports teammate Ty Dillon, who took evasive action to avoid a spinning Harrison Burton. On lap 351, Jones joined the long list of drivers with tire issues, suffering a flat right rear tire to bring out another yellow. Entering the race, Jones had the sixth-best average finish at the Last Great Colosseum. His issues relegated him to 21st.

Close calls all around as Erik Jones goes around at the #BristolNightRace. pic.twitter.com/ovFe3SaoFS

Ricky Stenhouse Jr. has quietly had some of the worst luck in 2022. After a strong run was foiled by a flat tire at Kansas Speedway a week ago, Stenhouse once again showed flashes of speed at Bristol. But once again, his speed hit a wall. On lap 277, Daniel Suarez‘s loose condition finally bit him, as he overcorrected and hooked Stenhouse on the backstretch. Stenhouse hit the wall nose-first, putting him in 33rd and giving him his ninth DNF of the year, the most he has had in a single season.

AJ Allmendinger (seventh): “I’m happy to run 500 laps at Bristol. Anytime I can do that, that’s a good night. I was pretty happy with our Camaro ZL1. We just needed a little bit more, I think, to get to the next level, but really happy when we can run anywhere from about seventh to 10th all night. We had good strategy, and our pit stops were really good. So overall, I’m just really, really happy with the night.”

Justin Haley (12th): “That’s a really strong night. We fought hard all night, played some excellent strategy and just had an overall good car. That was a good, good run for the company. We are definitely building something. We will take this and keep improving.”

Erik Jones (21st): “We knew this week may be a test with the new car at Bristol and it proved to have its challenges tonight. We struggled with the handling early in the race and were making the right changes but spun missing a wreck, and that put us a few laps down and then had a couple of tire issues late in the race. A disappointing night for sure. We have seven more races to build for next year, and I know we are capable of running up front and winning races. Just need to turn things around. We’ll head to Texas [Motor Speedway] next week, one of my favorite tracks, and see what we can do.”

Ty Dillon (26th): “Such a bummer way to end an otherwise pretty solid night out at Bristol. Our No. 42 team was able to make some pretty good changes to our car to help us throughout the race, and that put us in a position for a top-15 finish. Unfortunately, a mechanical issue of some sort took us out early. It’s a shame because we had made some good gains up until that point, but that just how it goes sometimes. Looking forward to heading to Texas next weekend and put this one behind us.”

Ironically, this week’s top underdog moments countdown surrounds the Bristol winner, Chris Buescher. In the 2016 Pocono 400, weather was once again a factor during the weekend. After originally being scheduled for July 31, the race was forced to the next day due to rain. As the 21st race of the season, it all ramped up the intensity as the playoffs drew near.

The race itself was fairly competitive, with 19 lead changes among 11 drivers in the midst of various strategies. Kyle Larson led the most laps with 37 but was far from being the dominant car. However, everything changed on lap 127. During a round of green flag pit stops, Buescher, who was a rookie with Front Row Motorsports, assumed the lead as the leaders pitted. Buescher’s No. 34 crew made the call to stay out as long as possible. Coincidently, a heavy layer of fog blanketed turns 1 and 2, as well as the backstretch. Visibility became non-existent for the spotters, making for dangerous scenarios at one of NASCAR’s fastest tracks. To make matters worse, a cell of rain was headed for the track.

NASCAR brought the cars to pit road in hopes of the fog lifting while a nervous Buescher anxiously awaited the call. However, the fog never left, and the threat of rain only grew. That forced NASCAR to call the race, handing the victory to Buescher for the first time in his short career.

222 races and six years later, Buescher finally got to take the checkered flag in a full race by winning at Bristol. Buescher led a career-high 169 laps en route to becoming the third consecutive non-playoff driver to win.

A couple of weeks after breaking out the fan-favorite A&W scheme, Front Row Motorsports delivered another mouth-watering scheme that fans have grown accustomed to. This time, it was the blue, yellow and white colors of Long John Silver’s adoring Todd Gilliland‘s No. 38 Ford. Gilliland was involved in the lap 277 wreck but recovered to earn an 18th-place finish in his debut on the paved Bristol surface.

“Too tight overall that run” – @ToddGilliland_

He’ll come to pit road for the team to make adjustments pic.twitter.com/eSM1RaXQFa