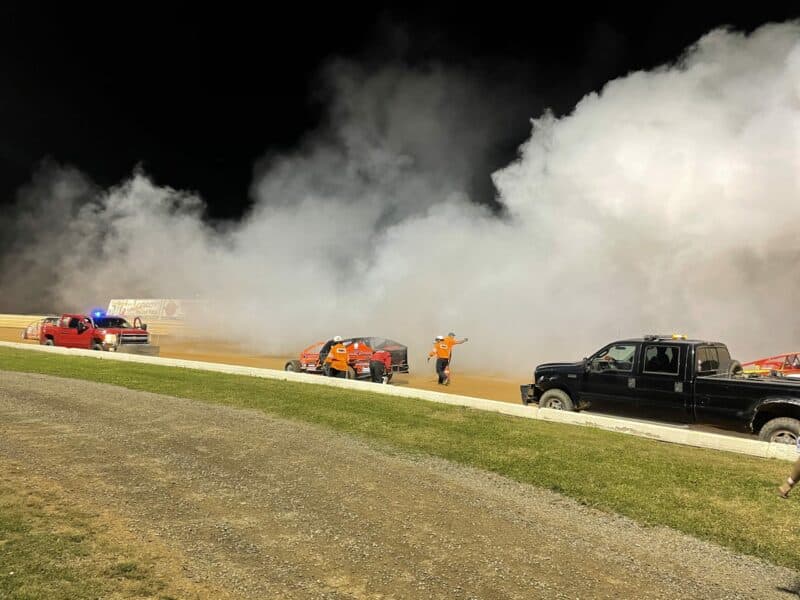 I almost opted to make this column a half-dozen examples of why tonight’s pending experiment by the XR Super Series of removing the droop rule from super late model racing may be a bad idea, as the weekend was chock-full of late models flipping from coast to coast. I saw that in person Saturday night at the Steel Block Bandits feature at the Wythe Raceway, though that flip was certainly crash-assisted.

Rough start to the late model feature @WytheRaceway last night. All drivers OK but red flag was a long one. pic.twitter.com/7jnzaJl63W

But, instead of a highlight reel I was instead perked up by the folks at DirtonDirt, several of whom lamented in their weekly “Fast Talk” feature about the ongoing issue plaguing dirt racing in general, that of drivers stopping on track to draw a caution flag.

It’s more of an issue in dirt racing than in big-league NASCAR because dirt racing officials have to be more trigger-happy with yellows. Dirt racing doesn’t have spotters or two-way radios, meaning slow cars on the track are even more vulnerable, both in terms of drivers dodging obstacles and crippled cars trying to avoid traffic as they attempt to get out of harms way. Still, the problem persists that competitors take advantage of the situation, stopping on track only to drive off the second the yellow flies.

Fortunately, just as the XR Super Series has gone against the grain of the national unified rules hoping to find a more competitive racing package, there are ample dirt races out there for tracks and series to experiment to find an effective means to end the practice of intentionally drawing yellows. Here are six ideas worth a shot.

Most series/tours will give teams a couple of laps to change a flat tire regardless of circumstance. There is merit to this idea ¯ dirt cars do not have rapid-change lug nuts on them, in most instances the tires used are mandated rather than the choice of the competitor and no race fan likes to see a contender tripped up by failed rubber.

But having said that, tire conservation is part of the game. And a tire failure is every bit a game of chance just as a blown engine or a broken driveshaft is. Yet there are no 20 courtesy laps for substantial mechanical repair.

Take away courtesy laps and any incentive to stop a car on track as opposed to just getting out of the way largely goes away.

Now, this is the least effective idea I came up with. There are tours that will already automatically throw a yellow flag if they spot a car with a flat tire because of said courtesy laps, and unlike NASCAR, dirt racing across the board is remarkably consistent in calling yellows for flat tires. But if the goal is to reduce yellow flags, taking away any incentive for limping on track will work toward that.

2. End tail-end penalties and give them teeth

Yes, drawing a yellow flag will result in being sent to the tail of the field pretty much anytime, anywhere. But if you’re 85 laps into a 100-lap feature and there are only five cars left on the lead in a race with no wave-around or lucky dog, why not draw a yellow and come in for an adjustment or a tire change where the rules don’t prohibit it? The reality is a tail-end penalty is an inconvenience, not a true disincentive.

Make the penalty for drawing a yellow flag loss of a lap and behavior will change really fast. Again, there’s no lucky dog in most forms of dirt racing, and even in places where there is one (the Super DIRTcar Series, for example) there’s no reason a penalty lap can’t be deemed by the scorers as non-recoverable.

There are risks associated with this change; namely that it could lead lapped racecars to simply park as soon as they’re swallowed up as opposed to running the distance. That’s a major problem, as dirt racing features often rely on lapped traffic to put on competitive shows. Going this road will require purses and points, where applicable, to be structured in a means that it makes sense for mid-pack machines (and cars that find trouble) to tough it out and remain on track till the checkers wave.

So on that note, why not give racetracks leeway to hit offending race teams where it hurts the most … the checkbook? Tying a financial penalty to bringing out a yellow flag unassisted during a feature race would be another strong disincentive to abuse yellow-flag rules. I will say if I was a promoter this would make me feel better in the event a driver interrupted a quality green-flag run for no good reason.

Of course, this one also is a double-edged sword that will demand objective and uniform officiating in a sport that doesn’t always have it. The second this type of penalty becomes weaponized as a means to reduce payouts or show favoritism, car counts will immediately take a dip.

OK, this one may veer toward what’s considered cruel and unusual punishment. But I’d find it immensely satisfying to have drivers told that the second your car comes to a stop on track and triggers a yellow flag, you are to remain parked until the track’s push vehicle picks up your machine and pushes it back to the work area.

And if the track wants to take their sweet time pushing a car to the work area while getting the rest of the field lined up and ready to go back to racing, so be it. There is absolutely nothing more frustrating in dirt racing than seeing a car stop, then drive away at speed the second the yellow has flown and the show has stopped. Give frustrated race fans some retribution!

Like it or not, dirt racing truly is a national sport in 2022, be it super late models or even IMCA stock cars. And while the sport is still decades behind big-league NASCAR in terms of making data uniform and reliable, there are still gobs of information available on pretty much every race contested across the country every weekend. As such, with some effort, there’s no reason that penalties for drawing yellow flags can’t be made publicly available and capable of following a driver, even if they travel from track to track or across different touring series.

Besides, what better way to disincentivize bad behavior than to have the label of a caution-hound follow a driver across the country?

I personally view the issues dirt racing have with drivers drawing unnecessary yellow flags in the same way soccer has and continues to struggle with players faking injuries and behaving ridiculously to waste time. There are ample solutions to fix this problem. If soccer would simply adopt a rule that any player that requires an injury stoppage cannot return to competition for 5-10 minutes of play, leaving their team a man down for that time, fake injuries would disappear in a big hurry. I firmly believe if dirt racing was to implement any or all of the ideas listed above, it’d have an immediate impact on reducing yellow flags.

But whatever the solution, more than anything the sport needs to admit there’s a problem and commit to hitting hard to fix it. Collective and consistent action by racetracks on the whole can and would better the sport.

Totally disagree with removing the laps for a flat. Dirt teams usually don’t have “pit crews” and changing a tire is tough. MOST tracks and series have a 2 lap rule or a time limit. THAT should be universal. If the driver stops on the track and they do NOT have a flat or damaged tire, then they should be penalized. I know in some asphalt racing, if you stop on the track (CARS Tour for example) you are penalized.