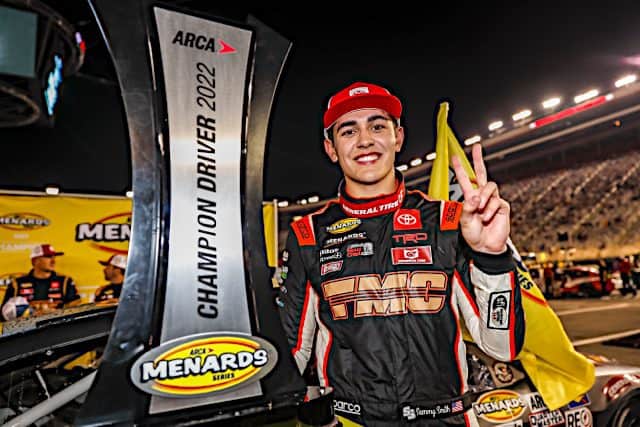 The No. 18 team in the ARCA Menards Series has not just been good over the past two seasons, it has been the best. Since the beginning of the 2021 season, the No. 18 team has won 14 of the 34 ARCA races for a whopping winning percentage of 41.1%.

On Thursday (Sept. 15), Sammy Smith walloped the field at Bristol Motor Speedway. He won the pole, then took the lead on lap 12 and never looked back. Smith led 189 of the 200 laps en route to capturing the checkered flag.

Smith will not win the championship as only three drivers still are mathematically eligible. Nick Sanchez still leads the standings, though his margin over Daniel Dye was cut down to five points. Rajah Caruth enjoyed a really good race at Bristol, though he trails by 30 points.

With only two races left in the ARCA season and three drivers still alive in the championship hunt, how did these competitors fare in the Bush’s Beans 200 at Bristol?

🏆🏁 Champions! Awesome to go to Victory Lane and secure a second @ARCA_Racing East title with @ToyotaRacing. Thank you to @KBMteam for all the hard work and to @TMCTRANS @PilotFlyingJ @PeterbiltGroup for the support this season.

Because he turned 18 years old on June 24, Smith missed four ARCA events and a 50-point bonus for competing in all the first five events of the season. Nevertheless, the No. 18 team is six points behind the No. 20 Venturini Motorsports team for the lead in the owners’ championship standings.

Smith has been the best driver on track this season. He leads the series in wins, top fives, pole awards and laps led. Smith can climb as high as fourth in the championship standings, but his on-track performance puts him atop these power rankings.

Sanchez left the second Kansas Speedway event with a 12-point cushion over Dye. It is a good thing Sanchez gained some points on Dye at Kansas because Sanchez struggled at Bristol, including a possible disaster on pit road involving one of his pit crew members.

For those who missed the pit incident in the ARCA race on @Nicksanchez080’s crew. Maaaaaan that’s a close call. Scary stuff. The heroics of pit crews doesn’t get talked about enough, those men and women have GUTS. pic.twitter.com/6unwhyaJjX

The two tracks left on the ARCA schedule are Salem Speedway and Toledo Speedway, respectively. Sanchez finished 17th at Salem in 2021 after a crash. In his two trips to Toledo, Sanchez has finished 10th and third, respectively.

To claim the ARCA championship, Sanchez will need a better finish at Salem and keep his No. 6 in the top five, at minimum, at Toledo. Oh yeah, he will need to drive with a functioning left rear shock too, something he did not have for part of the Bristol race.

After the Kansas event, Dye knew what he needed to do to take the ARCA points lead: gain four points per race on Sanchez. At Bristol, Dye gained seven points on Sanchez as Dye finished fifth and Sanchez wound up 12th.

“Bristol is one of those awesome places to come to,” Dye said in a post-race press release. “Great to be here, racing in front of a great crowd. It wasn’t the day we had hoped for, but we made up points on the [No.] 2 car and that was important. Proud to be a part of this GMS Racing organization and ready for the last two short tracks with our [No.] 43 Chevy.”

Dye has never competed at either Salem or Toledo before, so he must learn those tracks quickly. Dye has proven a quick study thus far this year as he has four straight top fives and 12 straight top-10 finishes.

Despite Taylor Gray wheeling his No. 17 to a third-place finish, scoring his eighth top five and 10th top 10, he was involved in a few incidents at Bristol.

Gray remains without a championship ring, but consider his 2022 statistics. Despite only running a part-time main ARCA schedule, Gray has three wins, eight top fives, 10 top 10s and is currently ninth in those championship standings. In the now completed East season, Gray scored one win at Dover Motor Speedway, six top fives and six top 10s. Also, his victory in the ARCA event at Phoenix Raceway counts as an ARCA Menards Series West victory because it was a combination race for the main and West series.

In addition, Gray has run in seven NASCAR Camping World Truck Series races, and he earned his career-best finish of sixth place at Richmond Raceway.

After back-to-back DNFs at DuQuoin State Fairgrounds and Kansas, Caruth showed his talent behind the wheel of his No. 6 Chevrolet as he drove it to a fourth-place finish at Bristol.

Unfortunately, his Thursday did not even on a happy note. He was involved in a lap 38 caution in the Truck race that night at Bristol, and he wound up with a DNF and 34th place result.

Unless both Sanchez and Dye have horrendous performances at one of the two remaining races, Caruth’s chances for an ARCA championship are over.

But that does not mean Caruth has not driven a solid performance in 2022. In his first full main ARCA season, Caruth has completed the third-most laps and scored the third-most top 10s. Not too shabby for a 19-year-old driver in his second year of ARCA competition.

The ARCA field takes its final off weekend before the season ends with back-to-back 200-lap Saturday races at short tracks Salem and Toledo. Salem will welcome the ARCA competitors on Saturday, Oct. 1, and then the Toledo event will be on Saturday, Oct. 8.