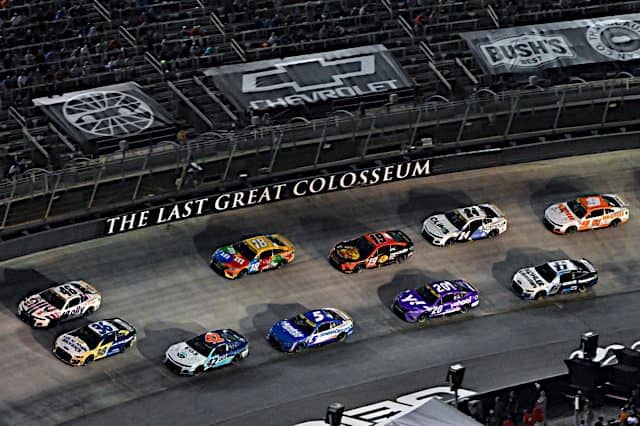 Bristol Motor Speedway is an interesting track in that there is always action to be had. However, you also had a playoff cut-off race here, which normally changes things.

Saturday night (Sept. 17) saw the NASCAR Cup Series take on Bristol Motor Speedway for 500 laps. Ultimately, this race will be remembered for the sheer number of mechanical issues.

Admittedly, drivers, teams and fans have been spoiled in recent years by the level of reliability in Cup. Mechanical failures just aren’t as common in any major series these days. The Next Gen car threw a wrench in those plans.

As you know, multiple drivers suffered steering rack/power steering failures Saturday night. Both 23XI Racing drivers (Bubba Wallace and Ty Gibbs) suffered failures on the same lap, which is completely insane. Martin Truex Jr. had a similar failure, and I think Aric Almirola did as well, although the broadcast didn’t truly make that clear.

These failures were somewhat strange. On both Truex and Wallace’s cars, the seal busted and leaked fluid all over the inside of the front tires, something that I cannot recall ever seeing before.

Once again, NBC Sports was there with an excellent CGI graphic showing off the steering rack and where they believed (correctly) where the failure occurred. Right after that, the cameras caught the 23XI Racing attempting to put a new steering rack in Gibbs’ car. The rare example of live TV providing an instantaneous payoff.

Knowing that everything in these Next Gen cars are bought off the shelf these days, the possibility of a bad batch of parts is very high these days. We’ve seen this before. Probably the best example was the 2002 EA Sports 500 at Talladega, where all four Hendrick Motorsports Chevrolets, plus the MB2 Motorsports Pontiacs of Johnny Benson and Ken Schrader, suffered engine failures in what is the most recent caution-free race in the Cup Series.

In addition to the steering issues, you also had a bunch of tire problems. Drivers such as Christopher Bell, Ryan Blaney, JJ Yeley, Brad Keselowski, Harrison Burton (multiple times), Denny Hamlin and others had tire issues.

During the broadcast, the booth was convinced that these failures were primarily down to tire pressure. This is why Steve Letarte would talk about the damage being done at the beginning of the run. Running too low on air pressure could conceivably cause an internal tire failure. Having too much camber could also cause a similar issue, especially for front tires.

In this case, the tire issues were combined with very little tire wear, so you couldn’t really look at a tire and see substantial wear. Chris Buescher won the race with a two-tire stop with 60 laps to go and skipped at least one stop altogether earlier in the race, along with teammate Keselowski.

After measuring friction levels on the track surface at @BMSupdates on Thurs morning & again today, the lower & upper lanes are at slightly elevated grip levels, while the middle lane remains basically unchanged. Below is the friction machine and program used to measure that grip pic.twitter.com/hIxZMCq5c6

That could be interpreted as blaming the teams for the failures, but no one has come out and stated that as of this writing. Then again, that could change.

The tire issues, plus steering issues and a couple of crashes, really put the kibosh to a lot of NBC Sports’ planning about the Round of 16 cutoff. Who would advance and who would be eliminated was not entirely determined on the track, which I’m sure agitated a number of people.

What viewers did get was a decent amount of coverage for position, especially early in the race. While they were definitely prepared to cover drivers such as Buescher and Keselowski leading over half the race by themselves, they really didn’t expect to be doing so.

As the race continued, the focus narrowed. Yes, the points as they run were on-screen for the vast majority of the race, but it was reduced to covering drivers like Austin Cindric passing slower lapped cars (Cindric finished seven laps down, but accumulated enough points to advance).

The overall racing product Saturday night was all over the place. There were times that it was pretty good and others where it was really underwhelming. While there were times where the leader was able to pull away, there was a lot of nose-to-tail action.

According to NASCAR’s loop data, Saturday night’s race had a lot more passing than last year’s Cup race, or the Xfinity race the night before. That is relatively interesting because watching this broadcast, it really didn’t seem like it. The Bass Pro Shops Night Race was definitely the more frustrating of those two races.

The race ended just about on time Saturday night. Post-race coverage was heavily focused on the playoff contenders, both those who advanced and who didn’t. Viewers got eight post-race interviews and a check of the new point standings before leaving Bristol.

Overall, this was not the best race broadcast. The explanation of the mechanical issues was the high point, but the on-track product was really rather middling to watch. Perhaps the production choices made the broadcast less exciting than it actually was (remember, more passing than last year, despite a drop in lead changes from 23 to 12).

It appears that the rules in place made it harder to pass for the lead than with the Gen6. That’s not great as that mirrored the issues at Martinsville back in April. Since then, there have been tests to try to improve the short track product, but it’s unclear whether that has helped at all.

There was also inconsistent officiating in regards to what would be a yellow and what wouldn’t be one. I can definitely understand Kyle Busch’s blown engine being one, but they were throwing yellows for cut tires where no one hit the wall. It was a little confusing to watch at times.

There were times where things happened during commercial breaks that weren’t covered in a timely manner as well. For example, before all of his tire and suspension issues, Blaney took the lead from Aric Almirola during a commercial break. Viewers never even saw a replay of this before Burton and Yeley had their tire issue.

Later on, Truex had his power steering failure under caution. He went behind the wall during the commercial and there was a long delay before covering it. Since Truex is 200+ points ahead of the next driver (Erik Jones) in points due to the playoff setup, he chose to park it instead of having the crew fix it. Couldn’t tell you if it was any worse off than the two 23XI Racing cars.

Finally, the 23XI Racing cars returning to the track after replacing the steering racks triggered all kinds of ridiculousness. There was a whole group of people out there saying that the 23XI teams needed to park so that Busch could move on to the Round of 12. That would be nothing short of team orders if they did that. NASCAR doesn’t need that trash.

The booth was cognizant of that fact and did not advocate for the team orders. However, they did make note of what 23XI Racing’s plan ultimately would do. Wallace’s car was still able to run at a decent pace once he got back out there. Gibbs was not as good and eventually retired with an additional failure. Woof.

That’s all for this week. Next weekend, the NASCAR Cup Series and NASCAR Xfinity Series both start the Round of 12 at Texas Motor Speedway, with 300 miles on Saturday and 500 Sunday. Sadly, I think you can already figure out what the main story is going to be there. Doesn’t even have to do with the playoffs.

“Sadly, I think you can already figure out what the main story is going to be there. Doesn’t even have to do with the playoffs.”

If its not playoffs, what else does NBC have to talk about?

Chris
Reply to  Kevin in SoCal

I got really tired, really fast with the playoff bubble chart that they ran a good majority of the race which blocked out half of where the running order would be shown. Then what would happen is while going through the running order in half the space they would make it to about 20th before the whole thing would change to a Toyota or Coke graphic. I get that the playoff cut line is a big deal with this crazy championship that NASCAR has now but they need to be reminded that there is a race going on as well.

Add to that having to watch lap after lap of in car camera shots that, at Bristol go for a bunch of laps with no context to the field.

If it wasn’t for mechanical issues for many of the cars Bristol would’ve been a pretty uneventful race for the most part.

I will congratulate the camera crew for the shot of Truex flipping the bird at his car in the garage area after the steering failed.

That had to be a mistake . I wonder if the director is still an employee?