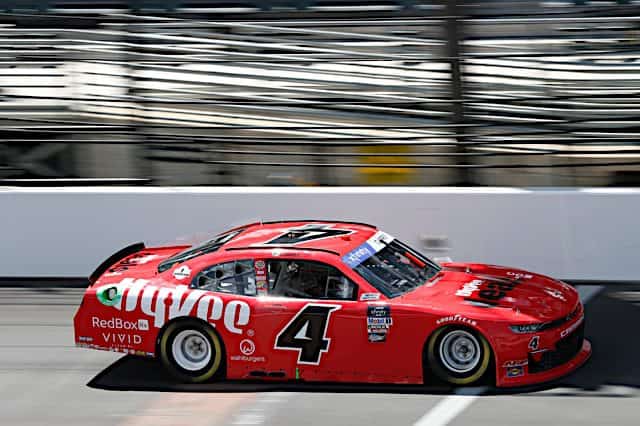 Bayley Currey will return to racing with JD Motorsports for the 2023 NASCAR Xfinity Series season, the team announced Sept. 20.

JD Motorsports also announced its intentions to field a three-car team for next year.

That plan includes Currey, who has been competing full time  in the team’s No. 4 Chevrolet. The 26-year-old has earned one top 10 thus far in 2022 and came close to a second at Bristol Motor Speedway last weekend, when he finished 11th.

“We’ve had strong cars all this season and some good finishes,” team owner Johnny Davis said in a team release. “We were especially excited about Bayley Currey’s 11th place finish at Bristol in the No. 4 Alka-Seltzer car. Bristol is one of the toughest tracks on the schedule. To finish every lap there is quite an achievement, and for one of our cars to come home 11th shows where this team is headed.”

“We don’t have the biggest team, but we have one of the most dedicated,” Currey added. “We ran so strong at Bristol, finishing ahead of some of the series’ most established teams and showed that we’re capable of more. I’m looking for strong teammates and dedicated partners to come on board and help us build on a strong foundation.”

JD Motorsports has not yet announced drivers for the other two cars for its 2023 plans. It’s fielded the No. 6 in 2022 as well, mostly for Ryan Vargas.

“We’re very excited about how 2023 looks,” Davis said. “I’ve been around this series for a long time, and the schedule looks to be the best it’s ever been. We’re going to be all over the country with our cars, and we’re going to have some great opportunities for partners to come on board and race with us.
“We’re always looking to put the best drivers together with the best partners so that we can keep this team running and racing at its highest level.”

Currey currently sits 21st in the Xfinity standings, while the No. 6 entry sits 34th in owner’s points.