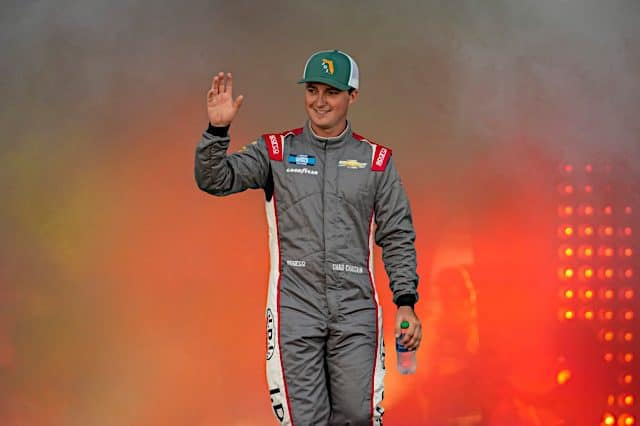 One of the major storylines of NASCAR the past handful of years has been the meteoric rise of Ross Chastain, going from watermelon farmer to field filler to Cup Series superstar.

Now, his 23-year-old younger brother Chad is trying to make the same ascension. Chad Chastain currently works on the family watermelon farm like his brother used to and is no slouch behind the wheel himself, winning races all over Florida.

Chad Chastain made his Camping World Truck Series debut last year at Watkins Glen International. He jumped in a Niece Motorsports truck after the team discovered Ross Chastain was not allowed in the race due to Cup drivers being barred from the regular season finale. The younger Chastain finished 34th.

Two more Truck starts came Chad Chastain’s way this year with Niece, with one start in the No. 41 and one in the No. 44. He finished 30th at both Lucas Oil Indianapolis Raceway Park and Richmond Raceway.

Frontstretch caught up with Chad Chastain prior to the Richmond race to talk his own racing background, what he’s working on now and what it’s been like to see his brother in the headlines so much.

Michael Massie, Frontstretch: How did this deal come about for you to driver for Niece Motorsports?

Chad Chastain: I’ve been working with them for a long time, just helping out when I can. We ran IRP really good and kept the truck clean last time out, and they put me in for this weekend, so I couldn’t be more thankful.

Massie: Has your brother Ross or [teammate] Carson Hocevar helped you out at all in prepping for these races?

Chastain: Yeah, so Ross has never ran a Truck race [at Richmond], so he’s just going off his knowledge of the trucks, knowledge of the track from Xfinity and Cup. I definitely asked Carson some stuff, it’s hardly the same because we have such different driving styles.

Massie: When did you start racing?

Massie: How old were you?

Chastain: I was 12, running pro trucks.

Massie: I read that you won pretty much everything in Florida. You won late model races, truck races down there, road course races. Is that true, and how did you drive so many different things?

Chastain: Yeah, so we had a pro truck that Ross ran and I ran when I was old enough to do it. We didn’t start at five, six, seven [years old] like some guys do in go karts. We started out in full-body stock cars. And then the typical, you do good there, you win races, you win championships, different track titles. You went in touring series, you win those races.

So then the next level is obviously gonna be late models. We made that step and won in pro late models at different tracks, won a couple of championships there. And now, we’re here.

Massie: I read you won at the Homestead-Miami Speedway and Sebring International Raceway road courses. What was that in?

Chastain: That was in the SPAT [Southern Pro Am Truck] Series. We ran at Homestead a couple times on the road course and the SCCA series when they were down there, and we also ran at Sebring a couple times. I was able to pick up wins at both of those venues, which was really cool because Ross has never won at Homestead and I got to.

Massie: One-upped him a little bit.

Massie: What year was that?

Chastain: That was 2015 or ’16, kind of when that series was in its prime and was having good truck counts.

Massie: What have you been racing the past couple years?

Chastain: Yep, so I graduated high school in 2017 and went straight to work on the farm. Racing has a tough business model, and it’s hard to get into it, and the opportunities weren’t there. So I went farming, and racing when I could. Not as much as I would’ve liked to. It’s two very hard industries to stay involved in, to stay on top of.

Massie: So you’re still working on the farm right now?

Chastain: Yeah, so I’m still taking phone calls and keeping the guys going. We’re fixing some stuff right now that got broke last season. That’s just the nature of the game. So we’re prepping for the 2023 spring crop right now.

Massie: So if you end up winning a race, are you going to do a watermelon smash as well? Or is that Ross’ thing?

Chastain: I’m not thinking that far ahead. I’m just looking to go out here and learn and keep a clean truck. And if we accomplish those goals and we have a good run, then we’ll be in the truck some more this year. So that’s the goal.

Massie: Your first couple of Truck races were kind of a struggle. But what did you learn that you could take away from those?

We’ve had speed both times, it was just the first race I made a very costly mistake, just inexperience. And back at IRP, we had some pit road difficulties and ended up a lap down, and then once you get trapped, you’ll never get it back.

Massie: Niece was a very integral part of your brother’s career. What’s it going to take for it to launch yours the same kind of way?

Chastain: Niece Motorsports, Mr. Al Niece, Mr. Cody [Efaw, Niece general manager] and all the guys here, all the boys and girls that are back to the shop and are coming to the track have already given me more of an opportunity than I could ever tell them thank you for. I tell them every day, just thank you for this.

I make sure they know how much I appreciate it. They’ve taken me farther than I ever would have thought. I don’t know where it ends, and hopefully, it really never does. I’d like to stay here.

Massie: Back in Florida, did you ever race against your brother?

Chastain: We have never raced because we only had one truck and one late model. So we didn’t each have our own. We ran the same setup for both of us. So that was kind of how that went. We’ve never actually competed in the same race.

Massie: How bad do you actually want to do that at some point?

Chastain: It’d be cool to go back and do it at some point, but right now we’re focused on this stuff and being successful up here.

Massie: How about you and him in the same Truck race? Are you trying to get that to happen?

Chastain: I think old Cody [Efaw] might have a heart attack if we try to do that. There’s always the option. We might have to pull that off one day.

Massie: What’s it been like watching Ross rise to become a Cup superstar?

Chastain: I knew he could get there in 2010, when we were running late models all around Florida and beating teams and drivers that had way more than we ever did and way more support and just way more manpower. It was Ross, my dad, our granddads both helping when they could and just a couple of friends from back home that I went to high school with. And that’s kind of how — when we were winning races then, I knew he could get here. It was just a matter of finding the right opportunity.

Massie: And then on the flip side, what’s it been like going through, like the Denny Hamlin situation and like seeing the TV guys kind of give him a hard time?

Chastain: It doesn’t bother me at all. It doesn’t bother Ross. That’s part of it. Every good driver has had those obstacles to overcome. So we just take it and keep putting together good races, and the finishes at the end of the year will tell the tale.

Massie: Are you going to finish out the year in this Niece truck?

Chastain: Right now, it’s just this weekend, and then I’ll head back to Florida on Monday. We’ll see how it goes tonight, and we’ll see what we can put together going forward.