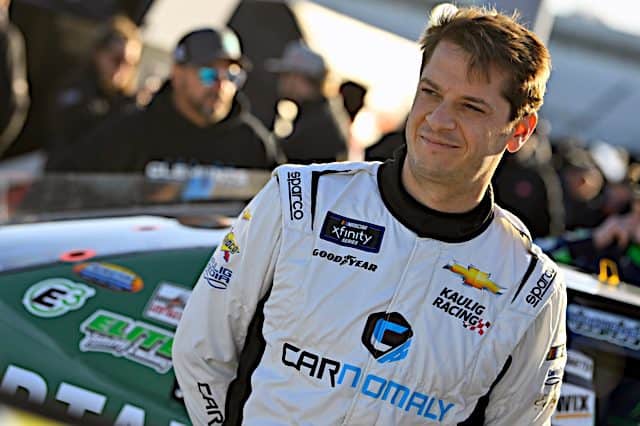 At the start of the season, Landon Cassill seemed like a shoo-in for the NASCAR Xfinity Series playoffs.

Even entering the cutoff race at Bristol Motor Speedway on Friday night (Sept. 16), Cassill had a 19-point cushion and basically had to have a major problem in order to miss the playoffs … and that is precisely what happened to Kaulig Racing driver.

A mechanical failure on the right front wheel torpedoed Cassill and the No. 10 team’s capability to control their destiny. After a lengthy stay behind the wall for repairs, Cassill reentered the race, but finished 112 laps down in 35th.

Cassill was riding around so many laps down without moving up the running order that all he could think about in the car was missing the playoffs. When he exited the car and spoke with the media, most of his answers were short. He was clearly in disbelief, maybe even slowly accepting his potential fate at season’s end. Either way, he wasn’t his normal chippy, smiling self.

It’s important to remember that one race shouldn’t define a driver’s season, but in the playoff era of NASCAR, that isn’t easy to do. Still, Cassill left points on the table over the course of 26 races, whether of his making or not.

In the season’s second race at Auto Club Speedway, Cassill’s engine failed and burst into flames only six laps into the race. That race left him with just a single point to add to his total.

At Circuit of the Americas, he restarted fourth with six laps to go. At the top of the hill in turn 1, he was nudged in the rear bumper by Brett Moffitt, sending him wide as he lost a handful of positions. Later on, Cassill broke second gear. He fell down the running order and finished 31st.

A mechanical issue at Charlotte Motor Speedway relegated Cassill to 29th. At Road America, he was involved in the big crash triggered when Noah Gragson spun Sage Karam. He finished 32nd that day.

Arguably Cassill’s biggest disappointment came at New Hampshire Motor Speedway, where he led his first laps of the season — a total of 17 — and crossed the finish line in third. However, in post-race inspection, NASCAR disqualified him (and fourth-place Gragson) for body height violations.

It was Cassill’s strongest day of the season, and in a blink of an eye, it was stripped away. Instead of a top five, the No. 10 team left New Hampshire in 37th.

Most recently, at Daytona International Speedway in August, Cassill was eliminated from the race in the final big crash of the night, finishing 23rd.

On Tuesday (Sept. 20), Kaulig Racing shared a tweet highlighting just how good 2022 has been for Cassill compared to the rest of his career.

2022 has been a career season for @landoncassill!

It’s no secret that Kaulig Racing is the best equipment Cassill has driven in any NASCAR series since he made 16 starts for JR Motorsports in 2008. At the time, JRM wasn’t the powerhouse it is today, and Cassill was only 18 years old. Now, at 33, he has a barrel full of experience driving moderate to subpar equipment, let alone all the experience that an 18-year-old driver only wishes they could have.

In 176 prior starts, Cassill scored only one top five, coming at the 2011 season opener at Daytona while driving for James Finch. He had 14 top-10 finishes and had led a total of 17 laps. In 2022, he has career-high numbers with three top fives, nine top 10s and 17 laps led. That’s not to mention his average starting and finishing positions have far eclipsed previous career bests.

Without Jeremy Clements winning at Daytona, Cassill makes the playoffs. But when Clements’ win was reinstated, that pushed Cassill to the playoff cutoff spot. When the right front mechanical issues sprung up, the fate of the No. 10 team’s season was no longer in their hands.

Looking back at the missed opportunities above, it’s difficult to entirely blame Cassill for causing them. Only the lost second gear could land solely on him. All the others were broken parts or another driver’s doing.

“My emotions aren’t the best at the moment. I’m pretty angry and disappointed,” Cassill said in the media bullpen minutes after the race concluded.

It’s been harped on before, but Kaulig lost a step or two during the 2021-22 offseason. Without AJ Allmendinger’s three road course wins, chances are that Kaulig would have a big ol’ goose egg in the wins column. It’s fair to say that the team Cassill signed up for in December 2021 isn’t the same one he’s driven for the first 26 races this season.

If you turn any of the poor performances above into a top-15 finish, Cassill is in the playoffs. If you turn all of them into a top-15 finish, he’s above Ryan Sieg and Kaulig teammate Daniel Hemric in the overall points and comfortably in the playoffs. And that hypothetical change doesn’t include an increased performance from Kaulig. Even through their struggles, more often than not, the three Kaulig Chevrolets were top-15 cars.

Putting aside the fact that Cassill brought Voyager Digital to the No. 10 car, Kaulig and other teams shouldn’t kick him to the curb of the talent pool for missing the playoffs. As for Cassill, missing the playoffs by five points is a tough pill to swallow. He has every right in the world to be disappointed with the repercussions of his finish Friday night.

Cassill is a fighter and survivor. That might sound extreme, but he’s fought to continue his NASCAR racing career and has long deserved the opportunity granted to him in 2022. Should he have made the playoffs? Absolutely. Did he expect his cars to be more competitive? Probably. Should they have been more competitive? Yes.

The wound may still be fresh, but Bristol will not define his season. The results he has shown, regardless of his adversities, will define his season. If missing the playoffs keeps him from returning to Kaulig or landing another top-level ride in 2023, that will short-change what Cassill brings to the table and will be a loss for the series.

Its a huge disappointment he hasnt won. I think that was at least the expectation. Then again, your 2021 champion has barely cracked the top 10 in most races and hasn’t gotten much TV time. AJ At least has ran up front, had stage wins, and came close to winning several events outside of the 3 mentioned.

I’ve always liked Cassill and was glad to see him finally get into a competitive car. So, I usually keep up with where he’s running in the scroll. One other rough finish that Josh missed was at Watkins Glen. Well, NBC missed it also, I had to look up a video online taken by fan at the track. The scroll showed Landon was in 10th coming into the final corner of the final lap. As NBC was showing the lead pack crossing the finish line you could see a tire smoke cloud in the background. This turned out to be Brandon Jones dive bombing Cassill in the turn and spinning both of them out. Although Cassill didn’t give much room either. Those 6 points lost within view of the checkered flag at the Glen would’ve been enough to have made the playoffs.

Mark
Reply to  JD in NC

Yeah that was a killer. I couldn’t believe it happened at the time and what those six points could mean, I still thought hed make the playoffs but youre right it was the difference