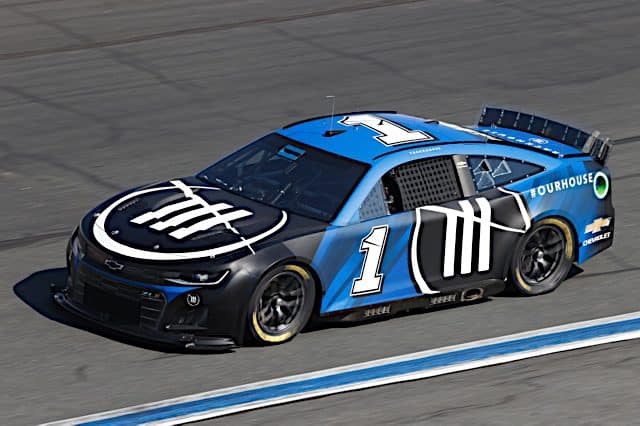 Did You Notice? … The NASCAR Next Gen chassis has come under increasing scrutiny in recent weeks?

The latest round of criticism came after last weekend at Bristol Motor Speedway, where the sport’s short track handling package struggled at Thunder Valley.

Despite another surprise winner this season, Chris Buescher, his upset felt drowned out this week by complaints from drivers about single-file racing and a complete inability to pass.

Add in a rash of right front tire failures, ending someone’s night at a moment’s notice and faulty Goodyears replaced fender-banging crashes in making Bristol a frustrating race of attrition. That shifted the pressure to pit road, where pit crews ultimately decided the race when Kevin Harvick’s fell apart after failure to secure all four wheels on their final stop.

“Just went from having a chance to lead the parade to being a part of the parade,” Harvick said.

Bristol marked the fourth time out of four short track races this season we’ve seen lead changes decrease from the previous year. The Bristol night race featured just 12 overall, the fewest at that track since 2009 and nearly half of what we saw last fall.

That’s 36 fewer lead changes, a significant number considering how much the Next Gen has increased competition elsewhere. Through 29 races, lead changes are still up 9% overall, with 552 vs. 507, despite such a steep decline on the short tracks.

To be clear, fewer lead changes don’t always indicate a race is terrible. You might have some incredible racing for second behind a dominant car. But when the declines are this sharp, that’s a strong indicator you’ve got a problem. Add in Goodyears that never wore out, unless they blew out on the racetrack, and it’s clear this car is struggling on smaller tracks.

It’s just the latest headache for this chassis that started the playoffs under a microscope. We’re just two weeks removed from Harvick’s fire at Darlington Raceway, caused without contact when excess rubber presumably lit up the rocker box. The “crappy-ass parts” line the two-time Cup champion used that night was repeated at Bristol when Martin Truex, Jr. was one of several drivers who experienced power steering failure.

Suddenly, the sport’s momentum from parity the Next Gen brought to the table appears to have stalled. The Round of 16 averaged a viewership decline of roughly 250,000 from the previous year; no NASCAR race has brought a year-to-year ratings increase since mid-August at Watkins Glen International.

Meanwhile, for a car that’s supposed to make life cheaper during the long run, a steady drip of new ownership in the sport has slowed to a crawl. Looking ahead to 2023, there are no new full-time owners buying into a charter on the Cup side with limited, if any, expected announcements in the NASCAR Xfinity Series or NASCAR Camping World Truck Series. Richard Childress Racing is the only team that has committed to expansion, meaning the ownership pool may decline by one if, say, it purchases a charter from a single-car team like Live Fast Motorsports’ No. 78.

The goal of the Next Gen was to standardize certain parts through a mass supplier, stabilizing the competition and the car for years to come. But in an era when technology updates so quickly (think of how many iPhone updates in the past 18 months alone), the honeymoon phase for new equipment is shortened considerably. Teams learn to adapt, challenges get overcome and, before you blink, the racing can get stale.

The real challenge for NASCAR going forward is finding a way to constantly tweak the Next Gen each year, as changes will always be needed, while balancing financial cost. What no longer appears to be on the table this offseason is doing nothing. There’s too much criticism and negative buzz that’s starting to seep into the narrative of this season.

It was fun while it lasted, Next Gen. The honeymoon phase of this chassis is over.

Did You Notice? … Even during this year of parity, the cream still rose to the top?

Last season, 11 of the 12 drivers in the Round of 12 came from three of the sport’s megateams: Team Penske, Hendrick Motorsports and Joe Gibbs Racing.

This year, both Penske and Hendrick pulled a repeat. All seven of their drivers advanced into the Round of 12. It’s JGR that suffered a setback, sending only two drivers through with Hamlin and Christopher Bell. Their other two spots have been taken up by newcomer Trackhouse Racing Team and its first-time playoff entries, Ross Chastain and Daniel Suarez.

The 12th spot, both in 2021 and 2022, has been taken up by Stewart-Haas Racing. The only difference here is Harvick has been replaced by another first-time playoff driver, Chase Briscoe.

So, despite 19 different winners, it’s fair to ask, has the Next Gen really changed things all that much? I’d understand if you feel that it hasn’t. But I think it’s important to point out one important thing: how the playoff field has gotten younger.

As I mentioned back in the spring, NASCAR’s generational change is in full swing. Hamlin is the only playoff driver remaining over the age of 32, with eight of them under 30. Only three former champions remain, with Larson, Chase Elliott and Joey Logano, compared to three first-time playoff drivers, including a rookie in Austin Cindric.

Does that mean drivers like Brad Keselowski, Martin Truex Jr., Kyle Busch and Harvick have missed their championship window? I don’t think so. Keselowski would have won Bristol without a flat tire, Busch is moving to a new team, and both Truex and Harvick are still highly competitive. But there’s a lot of hungry drivers to fight now that those names didn’t have five years ago, where this quartet seemed to glide into the Championship 4 with limited competition.

It feels like the type of streak Busch had (five straight Championship 4 appearances) won’t be repeated for a while. But as long as you’re in a top-tier ride, and three of those four definitively are, there’s an opportunity to go deep in the playoffs almost automatically. Even with the Next Gen.

“his upset felt drowned out this week by complaints from drivers about single-file racing and a complete inability to pass.”

The suits said the new car would get rid of single file racing and allow for more passing, Sounds like they screwed that up too! The restrictor plate events are the same if not worse, the intermediate tracks are worse and they even screwed up the short track events.Who could have seen that coming?

The generational change in NASCAR is the result of mommy and daddy having plenty of money to start kids racing at the kindergarten level.

These children don’t have families to provide for. Youngsters that don’t have to worry about paying bills, getting their hands dirty, or fixing broken race cars.

The parity is an illusion created by the new car where crews don’t have notes, parts randomly fail, and tires are often unreliable.