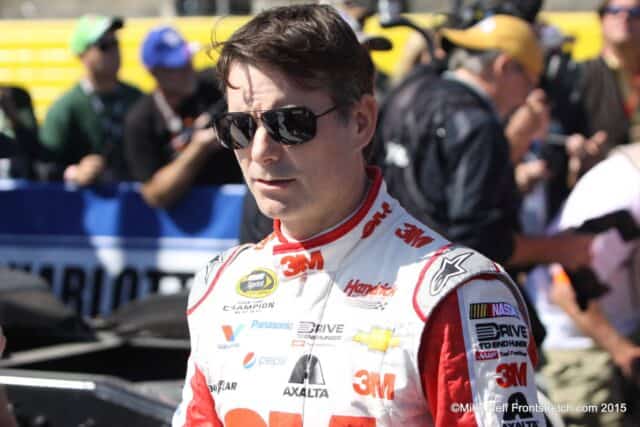 There was some either shady or highly coincidental stuff going on at Bristol Motor Speedway last weekend.

With the battle for the final spots in the NASCAR Cup Series’ Round of 12 coming down to only a few points, every position mattered. It ended with Austin Cindric claiming the 12th spot by a mere two points over both Tyler Reddick and Kyle Busch. But had that gap been only one point instead of two, then it might’ve led to Spingate 2 — just with 100% less spinning.

Remember Spingate? For newer fans, the 2013 Cup cutoff race featured an alleged intentional spin by Clint Bowyer and an unnecessary pit stop by Brian Vickers to help get their Michael Waltrip Racing teammate Martin Truex Jr. into the playoffs over Ryan Newman. Also, David Gilliland allegedly slowed down to give Ford teammate Joey Logano a position that allowed him to make it in the playoffs over Jeff Gordon.

The most incriminating part of Spingate was when MWR general manager Ty Norris, who now holds the same role at Trackhouse Racing Team, was ordering Vickers to pit, leading the driver to question why. Norris let it slip that they needed one point. As a result, NASCAR came down on MWR the hardest, fining it $300,000 and 50 points per car while indefinitely suspending Norris.

The points penalty dropped Truex out of the playoffs with Newman getting the spot in his place. And since there wasn’t enough concrete evidence against Team Penske for the deal with Gilliland, Logano kept his playoff spot, but a special postseason berth was added for Gordon to slide into.

To clarify, despite the headline of this column, I do not actually believe Gordon should be added to this year’s Round of 12. However, there might’ve been some similarities to Spingate in what played out at Bristol Saturday night.

Once Busch’s engine blew on lap 269, the rest of the race was spent seeing if Cindric and Reddick could finish high enough to overtake the No. 18 as well as each other. In the meantime, Ty Gibbs, who had pulled his No. 23 Toyota into the garage earlier in the race after having power steering issues, returned to the track. Gibbs was four laps away from passing Busch when he pulled back into the garage and parked it for the night.

23XI Racing President Steve Lauletta hinted at Gibbs parking it to benefit Toyota teammate Busch in a tweet. Losing that position would’ve made it that much harder for Busch to make it into the Round of 12.

Later in the race, the points battle was still tight between the trio of Cindric, Reddick and Busch. Cindric’s Penske teammate Logano started having issues with the car’s suspension and lost a handful of laps but still remained two laps ahead of the No. 2.

Then, during the final caution on laps 437-443, Logano parked the No. 22 with Cindric passing him shortly after. However, Reddick eventually passed Logano as well, so that move only hurt Busch. Still, Dale Earnhardt Jr., who was in the broadcast booth for USA Network, noted on his podcast Dale Jr. Download how shady Logano’s parking seemed to him.

“Cindric needs to pass him [Logano] to be able to get a point, and yeah, with a few laps left in the race, all of a sudden, ‘Oh, the 22 car is on pit road,'” Earnhardt said. “We were in commercial, I believe, under caution, and he [Logano] gave two laps up to Cindric under that caution. We’re sitting there going, ‘Well, that was convenient.’ ‘We’re in commercial? OK, come on down pit road real quick. Nobody will know.'”

Coincidentally, as this whole situation was playing out, I noticed Norris, who had his driver Daniel Suarez right above the cutoff spot, standing behind me in the Bristol media center staring at the monitor with the points on it. After the race, a Trackhouse rep was overheard asking a media member what actually happened to Logano.

To its credit, NASCAR did investigate Gibbs and Logano going out of the race and said they had legit failures. However, it’s hard to trust the officiating from Saturday night after how inconsistent the caution flags were thrown that evening.

Brad Keselowski’s flat tire did not bring out a caution flag even though he hit the wall and spotter TJ Majors said on podcast Door, Bumper, Clear (DBC) he had to let the majority of the field go by before he could get to pit road. Not too long thereafter, Christopher Bell had a flat tire and immediately received a caution when it didn’t look like there were that many cars near him, despite NASCAR Racing Communications managing director Mike Forde’s tweet saying there were lapped cars three-wide.

These are just two examples of a night where plenty of flat tires brought out the caution while others didn’t.

Show me where there were cars 3 wide behind Christopher Bell “barreling down” on him.https://t.co/hoUvdAbs51

So what would be wrong with Gibbs and Logano parking their cars if they could’ve continued? This is America, after all, and you can park your car if you feel like parking it, right?

The problem is that NASCAR has a 100% rule (though rarely enforced), and Spingate, as well as Matt Kenseth‘s suspension in 2015, showed it usually comes down hard on those who interfere with the playoff battles. Coincidentally, Logano was involved in both the situations I just named along with the one from Saturday.

I don’t have a problem with one team breaking the 100% rule to benefit another. It has happened all throughout NASCAR’s history.

Ronnie Thomas, who raced in Cup from 1977-1989, revealed on the Scene Vault Podcast that bigger teams used to pay him to intentionally spin and bring out cautions when they needed them. Just a few weeks ago at Daytona International Speedway, Denny Hamlin lifted coming to the end of a stage to allow Joe Gibbs Racing teammate Truex to pass him and get one more stage point.

Situations like those had ever been a huge issue until former NASCAR CEO/Chairman Brian France made them one in 2013. The repercussions from Spingate eventually killed MWR, yet a same kind of call hasn’t been made since then even though there have definitely been similar situations.

NASCAR penalized Rick Ware Racing, Spire Motorsports and Premium Motorsports for manipulating the highest-finishing non-chartered points battle in 2019, but that penalty was a slap on the wrist compared to what MWR got.

Just like with what constitutes a caution, there needs to be consistency on NASCAR penalties for manipulating finishes and breaking the 100% rule. If Spingate was the lone exception to NASCAR dropping the hammer hard and that kind of harsh judgment died off when France was removed from power, that’s fine. I just hope that in the future, if the same kind of instances that happened at Bristol occur again, the involved teams don’t get penalized either now that the standard has been reset.

And yes, it is entirely possible Gibbs and Logano had legitimate failures that coincidentally took them out of the race at those beneficial times. But Brett Griffin, who was Bowyer’s spotter in Spingate, had something to say on DBC about anyone who believes that it was just a coincidence.

“Spot on for the owners and the crew chiefs that made the decision to park the cars to help their respective teams,” Griffin said. “That’s why you own multiple cars, that’s why you have manufacturer alliances. And if you people who are referencing this as, ‘Oh man, this is no different than what MWR did,’ you’re 100% right. It’s no different than what MWR did. They’re trying to essentially maximize their guy’s day, and if you think this isn’t going to happen, you’re naïve as fuck.”

Actually, Brett, there is one major difference between this situation and the one in 2013: no driver as big as Gordon missed the cut. Even Busch and Kevin Harvick are not as big a name as Gordon was back then. By the way, Cindric made it in by two points, not one, so the alleged team orders and race manipulations didn’t affect the outcome anyway.

But what if they did?

I’m glad someone finally mentioned the possibility that teams may have been playing games with the points to benefit another team. I know what it looked like to me.

“Let’s Add Jeff Gordon to the Round of 12”
I don’t care who you are, that’s funny right there!

The 6 is a FORD and the 20 is a REVEREND JOE car! The caution would also have come out for a MR. H car. Duh!

I notice you left out the caution that came out for the 21 single car spin on lap 140 ….

It was a mistake. The person responsible lost his job on the spot.

Either that or the car blocked the track.