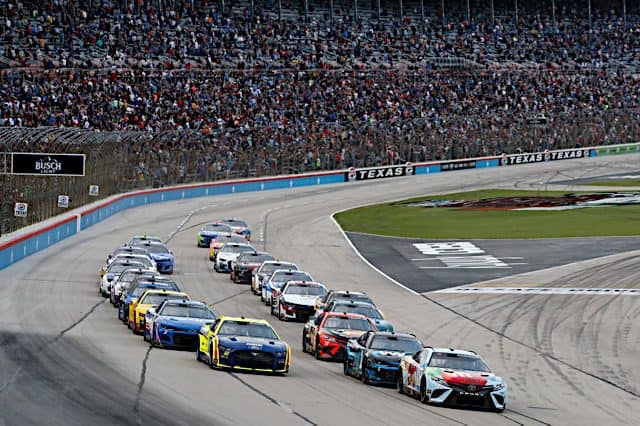 Given the time of year, the NASCAR playoffs appropriately resemble a slasher horror film more than any other sport. However, instead of Michael Myers, the Thing or Pazuzu exacting doom upon someone, it’s mechanical failures, hard racing and bad decisions knocking these pilots out of the postseason. Although the bad decisions aspect is probably applicable to both.

That all said, just 12 competitors remain in contention for the 2022 NASCAR Cup Series title, and with the oft-dreaded Texas Motor Speedway ahead of the field this weekend, it’s time to look at how the remaining dozen stack up.

Chase Elliott, of course, ended up as the 2020 Cup champion after a comeback win at Martinsville Speedway in the penultimate race landed him in the Championship 4 at Phoenix Raceway. He’s made the championship round twice, has four wins this season and could be on track to make his third final playoff round.

That’s all well and good, but the No. 9 suffered misfortune at Darlington Raceway last round in a crash and finished just outside the top 10 at Kansas Speedway. His runner-up at Bristol Motor Speedway was the bright spot, but his last win not awarded post-race was nearly two-and-a-half months ago.

More consistency is needed for them to move past the Round of Chaos.

Denny Hamlin has a trio of triumphs at Texas, leading all current playoff drivers, with the most recent in spring 2019. He’s also made the past three championship rounds and four overall, seemingly the driver most overdue to finally break through and win a title.

The Chesterfield, Va., native also feels like a playoff relic, and that’s not a comment on his age. His Joe Gibbs Racing teammates in Kyle Busch and Martin Truex Jr., plus perennial contender Kevin Harvick, have been constants in the postseason for pretty much the entirety of the playoff era. Busch and Harvick were just eliminated at Bristol while Truex didn’t even make the playoffs. Hamlin’s one of the few recurring competitors remaining.

Eight playoff years thus far means 32 Championship 4 spots, and just 11 of those were taken by drivers still in the 2022 playoffs: Hamlin with four, Joey Logano with four, Elliott with two and Kyle Larson with one. All the others were by drivers who have since retired, didn’t even make the playoffs this year or have already been eliminated. Notably, 2015 and 2017’s title quartets are entirely excluded from 2022 contention at this point.

Logano is in the same camp as Hamlin, having four Championship 4 appearances to his name, but has settled down as the year has gone on. The No. 22 won the exhibition opener at L.A. Memorial Coliseum and added wins at both Darlington Raceway and World Wide Technology Raceway at Gateway but has yet to finish better than third since that Gateway win nearly four months ago.

He does have a win at Texas and three triumphs at Talladega Superspeedway, but none in Fort Worth since 2014 and none at Talladega since 2018. That team has scored some solid finishes of late but hasn’t managed to break through for a third win in 2022.

Larson is the fourth and final driver on this list to have visited the crowning race of NASCAR still in title contention in 2022. He fought off Truex last year to win the Cup title and his 10th race of the season, but the parity of 2022 has led to the No. 5 visiting victory lane just twice so far, with those wins spaced far apart at that.

His average finish has dropped more than four positions from his 2021 performance, but he still has 15 top 10s amid a season of turnover and change with the Next Gen car.

Who could’ve seen that Christopher Bell would be the first driver to lock himself into the Round of 12, and only on points? That was one of the many surprises to come out of the first round, with non-playoff drivers Erik Jones, Bubba Wallace and Chris Buescher sweeping the opening three races.

He’s finished fifth, third and fourth in the first three playoff events. Bell seems like a solid, sneaky pick to make the Championship 4 at this point.

It seems like Byron might be a prime contender to continue advancing in the playoffs, and he does have finishes of eighth, sixth and third across the playoffs’ first three races, but the No. 24 hasn’t won at any of the three upcoming tracks and has generally struggled of late.

Though Ryan Blaney narrowly dodged a first-round out at Bristol, sneaking through on points despite a ton of issues with the No. 12, that doesn’t change that he still hasn’t won at all in 2022. He’s not quite at double-digits in top fives yet but has 13 top 10s and could capitalize this round.

That’s because Blaney has won at both Talladega and the Charlotte Motor Speedway ROVAL in the past, winning two straight at the former and the first-ever race on the latter.

Alex Bowman is in the same boat as his teammate Byron in that he’s settled as the year has gone on. His win at Las Vegas Motor Speedway nearly ensured his spot in the playoffs early on, but multiple DNFs since then (including four in a six-race span) have meant the No. 48 has just 12 top 10s in 2022, and suffering issues at Bristol last week didn’t help.

It feels like at least one of the Hendrick Motorsports cars might be eliminated this round, but it remains to be seen whether it’ll be Bowman, Byron or a surprise in Elliott or Larson.

Ross Chastain‘s lone playoff appearance is in the current season, with 2022 marking a first for him in both that and wins, with the No. 1 team reeling off a streak of fantastic finishes early in the year and winning at both Circuit of the Americas and Talladega.

His Trackhouse Racing Team stablemate Daniel Suarez broke through for his first win at Sonoma Raceway later in the year, having found a home with Trackhouse the last couple years after winning the 2016 NASCAR Xfinity Series title and then bouncing around the Cup Series.

Chase Briscoe and Austin Cindric‘s first career wins also got them to this point, and they’ve managed to survive through one round as surprise eliminated racers Harvick and Busch dropped out. However, it feels like the Round of 12 might be the end of the road for both cars.

The slasher movie aspect applies more and more to the NASCAR postseason the more I think about it. While the checkered flag at Texas won’t be the death knell of elimination for anyone quite yet, it’s the final normal race as the enormous superspeedway in Alabama and the ROVAL in North Carolina await.

For something that NASCAR has pushed front & center, from Daytona through the rest of the schedule. The playoffs, love them, or not, deserves better than the so-called Roval. I’m good with a road course, but it needs to be a real one, not some basterdised version just to fulfill a contractual obligation.

In reality, I hope Hamlin is one of those last four. But it’s probably already decided to give Hamlin a break on anything questionable. But I’m sure he is remembering past chokes already.