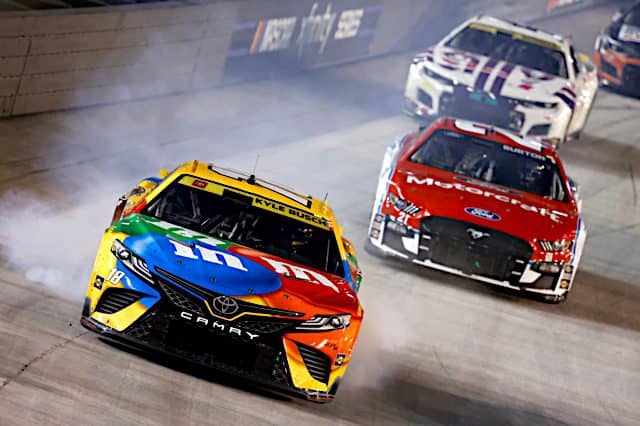 In a crazy twist of events, Kyle Busch managed to blow two engines in three races to get himself eliminated from the NASCAR Cup Series playoffs. As his smoldering hulk of a racecar pulled behind the wall at Bristol Motor Speedway, the rampant speculation had already begun that Toyota and Joe Gibbs Racing intentionally sabotaged the No. 18 because Busch announced he wasn’t coming back to the team in 2023.

To honestly believe something like that is simply absurd.

The money involved in a Cup effort, from driver and team to shop personnel and marketing activation, is a humongous amount of money.

The revenue generated by a championship win helps fund an entire organization for the entire next season. Busch wasn’t having a great year, but over the last three races he was showing speed in every event and looked to have a victory in his sights in at least two of them before the catastrophic events. Any time that Busch is in a race he is a contender to win, and the better his equipment and team, the better his chances.

For the tin foil hat wearing crowd, the entire season could be used as evidence for how poorly they have prepared Busch’s cars. With seven races to go in the season, he has one win. That came when he backed into the win after Chase Briscoe lost his talent briefly and pile drove Tyler Reddick into the wall at Bristol Motor Speedway during the dirt race.

He has six top-five finishes, which is three less than any year he has run a full season, or even his injury-shortened season that ended up in his first title. His 13 top-10 finishes is tied for his two worst seasons in that category in his career. While the stats justify some nefarious activity, it is more likely that Busch has simply failed to get a handle on this new iteration of the car.

Joe Gibbs Racing and Toyota, through their Toyota Racing Development arm, not only put the previously mentioned exorbitant amount of money to compete on the Cup circuit, but they also pour thousands of hours of time into wind tunnel testing and other research and development for all of their race teams. That information goes into every vehicle that comes out of their race shops. The cars that are produced at JGR are not earmarked for a specific driver/team until late in the preparation process. That methodology of preparation in and of itself makes it highly unlikely that a nefarious circumstance could be implemented to undermine the effort of one team in the organization over another.

See also
Up to Speed: The Next Gen Car — NASCAR’s Unfinished Revolution

While Busch was not committed to JGR at the beginning of the year and has since announced his agreement to move on, the majority of the rest of the team is still going to call JGR home in the future. JGR is focused on providing for all of the team members, their families and their futures. A family-oriented team like JGR is not going to turn their back on the dedicated teammates out of spite for the driver making a decision to move on after a season.

In the last few days, word has come out that there may be a systemic problem that reared its head with the Busch failures that is actually a problem for all of the Toyota teams. TRD President David Wilson told NBC that there appears to be a durability issue with the Toyota power plants when they hit the NASCAR mandated rev limiter. Busch missed a shift at Darlington Raceway which caused the engine to hit the chip. Shortly thereafter, the engine expired.

Similarly, at Bristol, the NASCAR mandated gear ratio resulted in the engines hitting the chip, especially when the cars ran the high line, which was where Busch was finding success on Saturday night (Sept. 17). Wilson stated that it was unacceptable for the engines to struggle at that RPM and feels that they should be capable of handling situations of hitting the limiter without any kind of malfunction.

The idea that a multi-million dollar company would engage in an organized effort to ruin the season and a potential championship run for the most successful driver in the history of the manufacturer’s involvement in a sport is simply crazy. While fans can conjure up some crazy ideas and extravagant plots, the bottom line is that there is far too much invested in a race team for an organized, subversive plan to be executed and eliminate the only multi-time champion in the series, from the playoffs.

Did Busch have an off season this year? Absolutely. Did Joe Gibbs Racing throw away millions of dollars of support from their manufacturer, Toyota, to carry out some spiteful, petulant act against the most successful driver in the history of their company? No way.

Believe what you want, but JGR did not endanger its relationship with Toyota for a childish prank.

I agree. Now if Kyle was making suggestions then there might be more to it. But look at all the issues Toyota had on Saturday alone tells you its not sabotage. You also didn’t mention the sponsor too. Your not going to screw them either. Even if they are also leaving.

I agree they would not deliberately cause damage. They could experiment with new parts and test new combinations? Probably not.
The idea they (Toyota) would even think of something so sinister conflicts with the internal Company philosophy and would be an insult to the corporate structure.
Also, what if a bookie found out? Too many items that could go wrong. Sometimes, it is just bad luck.

It would be like throwing away a lottery ticket before the drawing. Idiotic. There would be absolutely no incentive for JGR to do such a thing. Anyone that would suggest such a thing must not realize the actual amount of money involved on both the investment side and the payoff side.

Bet on Busch next year when he gets a new crew chief.

Well dipshit you need to get a clue ,that shit happens all the time. But if you know what you were talking about you would have already figured that out, try harder next time.

I disagree. You really think. knowing KB is leaving and put him in championship equipment? How about a little R&D on track for grandson next year? Why isn’t any other Toyota team having engine failure? I could be wrong by it does seem a little off for a team like JGR to have this happen 2 out of last 3 races with the same team. Just saying how would it look for KB to win a championship and leave to a different manufacturer next year? I think we all know

I believe that the intensity of the season has increased as the playoffs neared and even more. as it began. WHAT WORKED AT THE BEGINNING, DID NOT SUSTAIN AS RACING GOT MORE CRITICAL.
Say it like this, drivers out drove the car. Kyle only raced, to were the car was not able to perform as expected.

Nice Story. Sounds like Pro Gibbs Propaganda. If What You Say was True Toyota, Gibbs and 23I Would have never put the 45 and 23 ( Witch had Zero Chance of Winning ) back in the race. They Did and It Helped Knock KB Out.

I disagree. If this is so random why has it not happened to other drivers having blown engines. How is it that 2 out of 3 races blown engines happen to KB but nobody else. Random is one early in the season and one later in the season, not 2 out of 3 races. If you are so concerned about that championship money for the organization then increase your chances by having 3 drivers instead of just 2. There was no reason for Bubba or Ty to go back out and take those points away from KB. Everyone is entitled to their opinion. My opinion is internal help to fail because there is no way that someone as successful as KB does not understand the new car or missed a shift. How do you miss a shift in a sequential shifter? I am not buying just bad luck.