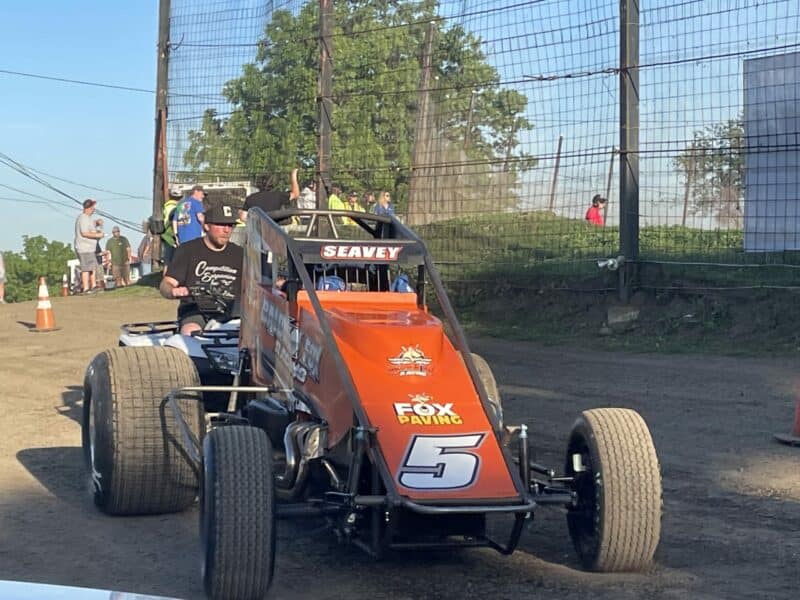 On a night where the top side of Gas City proved dominant in the opening midget feature only to prove treacherous with a razor-thin cushion sending many drivers for a ride on the high side, Thomas responded to losing the race lead to Seavey with his only option.

Finding a load of grip before anyone else in the field, Thomas, who had led the opening 20 laps of the feature, took the lead back from Seavey on lap 23 and drove off to his 39th career USAC sprint car victory.

Thomas nearly saw the bottom bite him on the white-flag lap, with a lapped car taking his preferred groove entering turn 1. However, Seavey jumped the cushion on turn 2 exit trying to overtake Thomas, allowing him to drive off to victory.

Current points leader Justin Grant came out of seemingly nowhere to score a fifth-place finish in the feature, extending his points lead over Brady Bacon on a night when the NOS-sponsored driver was not a factor up front.

Thomas earned every bit of his win by making a gutsy move to the bottom of the track as soon as he lost the lead for the first time in Thursday’s feature. Many dirt races will see a hard charger emerge as the first to explore and find something on a dirt surface, but it’s special to see the race win decided by such a move. That feature win was an extension of an excellent heat race that saw Thomas go from fourth to first on the first lap to score that checkered flag.

Kaylee Rae Bryson finished second in the evening’s USAC midget feature, tying the best finish for a woman in USAC national competition dating back to 1999.

Ties an all-time record! @kaylee11b ties the record for the best finish by a woman in a USAC @NosEnergyDrink National Midget feature tonight at @GasCitySpeedway.

She now shares the record with Sarah McCune who finished 2nd at @FastestHalfMile in 1999. pic.twitter.com/9e1FU7z6ZM

The back of the top five consisted of the two hardest chargers in the James Dean Classic feature. Grant was the hard charger of the race, going from 14th to fifth in the feature. Finishing just ahead of him was Robert Ballou, who went from 11th to fourth after scoring the semi feature victory earlier in the evening.

Buddy Kofoid likely would have been hard to stop in any circumstance during Thursday’s midget feature, but two drivers lost their chance at making the race-ending duel between Kofoid and Bryson a bigger party. Brenham Crouch, who eventually finished third, was the first driver to run down Bryson, but hitting a rut in turn 1 just the wrong way mid-feature mired Crouch back in the top five never to challenge for the lead again.

And as for Jacob Denney, there was contact involved in knocking him backward during the feature (Denney finished fifth).

Three drivers went flipping during Thursday night’s James Dean Classic racing program, all of them in the midget ranks. First to go for a tumble was Cannon McIntosh during qualifying.

UPSIDE DOWN goes Cannon McIntosh in qualifying for the James Dean Classic at @GasCitySpeedway! pic.twitter.com/yq8eaogOLL

Later, both Bryant Wiedeman and Blake Brannon both went tumbling during the feature. All three drivers walked away from their incidents.

Looks can be deceiving. Considering how many sprint cars went over the cushion throughout Thursday’s James Dean Classic feature, I was flabbergasted to see that there actually was a cushion on top of the Gas City racing surface.

The Bryson/Kofoid battle up front that decided Thursday’s midget feature was a welcome departure from 2022 midget racing. Both drivers ran close and aggressive, throwing sliders without turning midget racing into a demolition derby. Job well done.

Fall weather has definitely come to Indiana (the temperature was 51 degrees at the time Thomas took the checkered flag), so it was a nice touch to see the track include some sweatshirts in their T-shirt shuffle activity. No wonder Gas City’s grandstands were packed for a rescheduled Thursday night race.

Efficiency, thy name is Gas City. Yes, the program got an unexpected aid from a sprint car feature that went caution free, but to see the entire racing program run two national touring series in three hours and be done by 10 p.m. was a shining example of how to run a midweek program.

Where it Rated (on a scale of one to six cans with one a stinker and a six-pack an instant classic): We’ll give the James Dean Classic five chilled Heineken Gasoline lagers. A caution-free headline feature with passing for the lead and an efficient two-class program that was run in approximately three hours and done by 10 p.m. This was a mid-week treat.

Up Next: A rare departure from the ranks of open-engine racecars this coming weekend has Thinkin’ Dirty heading to the Virginia Motor Speedway for the $50,000-to-win FASTRAK World Championship for its Pro Late Model division. Coverage can be found Friday and Saturday nights on Flo Racing.