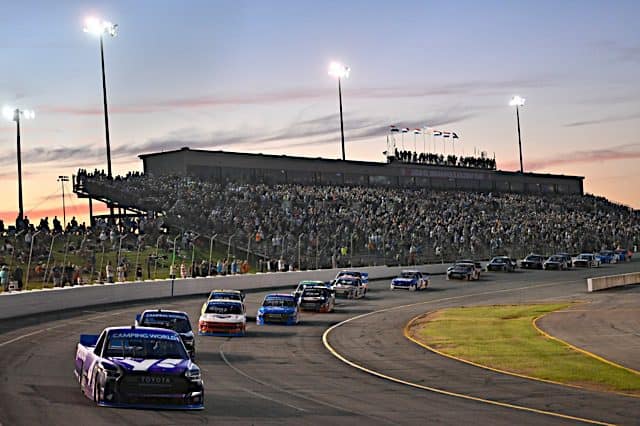 Last week, NASCAR revealed the 2023 Craftsman Truck Series schedule, and as expected there were a few changes.

Gone are any breaks longer than two off weekends, and despite a few rumblings that there could be more than 23 races on next year’s docket, that’s not the case.

Tough as they come. 👊

As you would expect, the season opens at Daytona International Speedway and closes at Phoenix Raceway alongside the NASCAR Cup and NASCAR Xfinity series.

Once again, Kansas Speedway marks the only track with multiple dates, although technically Bristol Motor Speedway has a pair too, albeit one on the dirt surface and one on the concrete surface.

Just seven of the 23 races are mile-and-a-half tracks, while there are just two road courses in Circuit of the Americas and Mid-Ohio Sports Car Course. Next year’s schedule removes the trip to Sonoma Raceway, a return that lasted just a single season.

Additionally, after two years of racing at the historic dirt track, Knoxville Raceway is off of the schedule, so the Truck Series once again will only race on the purpose-built Bristol dirt surface rather than a traditional dirt track.

While I quite enjoyed the two years of racing at Knoxville, social media chatter made it clear many didn’t find it at all entertaining, and apparently NASCAR agreed based on its removal from the schedule.

But perhaps what stands out most is the addition of North Wilkesboro Speedway and the Milwaukee Mile.

North Wilkesboro hasn’t hosted the Truck Series since its second season in 1996, a race won by Mark Martin, and next year’s event marks just the third time the series has visited the facility that has recently received another chance at relevance.

Meanwhile, the Truck Series visited Milwaukee for 15 years from 1995–2009 before the track was removed from the 2010 schedule.

“I think it’s going to be a great event,” NASCAR Senior Vice President of Racing Development & Strategy Ben Kennedy told NASCAR.com. “It’s something new and different and kind of a bit of a throwback for us as well. If you go back and look at the history of racing at Milwaukee Mile, it’s lengthy and it’s put on some really exciting races. We’re really excited about that.”

Tickets are already on sale for the Milwaukee race weekend, which will run alongside the ARCA Menards Series. General admission and reserved tickets are available.

“It’s just kind of a progression that we listened to the fans, we listen to the market and we just believe that we can make this work with everybody’s help and community involvement,” promoter Bob Sargent told the Milwaukee Journal Sentinal. “The Milwaukee Mile’s got such great history and the facility is still in such great shape that this is kind of a natural progression. We felt that the Craftsman Truck Series would be a great addition.”

After returning this season, Lucas Oil Indianapolis Raceway Park will kick off the 2023 playoffs the second weekend in August instead of the last weekend in July. Milwaukee and Kansas will follow it to close out the Round of 10. Bristol, Talladega and Homestead will once again make up the Round of 8 before the Championship 4 race at Phoenix to close out the year.

While I certainly would have liked to see the addition of at least two to three races to next year’s schedule, it continues to move in the right direction returning the series more to its roots of racing short tracks. And given that it’s still one of NASCAR’s top three rungs, I don’t think we’ll even see the complete removal of mile-and-a-halves, superspeedways or road courses, but that’s not necessarily a bad thing.

So excited to have a new sponsor enter the sport!! Lets Go Truck racing!! https://t.co/2nFckK2c4U pic.twitter.com/jFbNMUHYyR